Understanding the Effects of Pesticides on Your Health 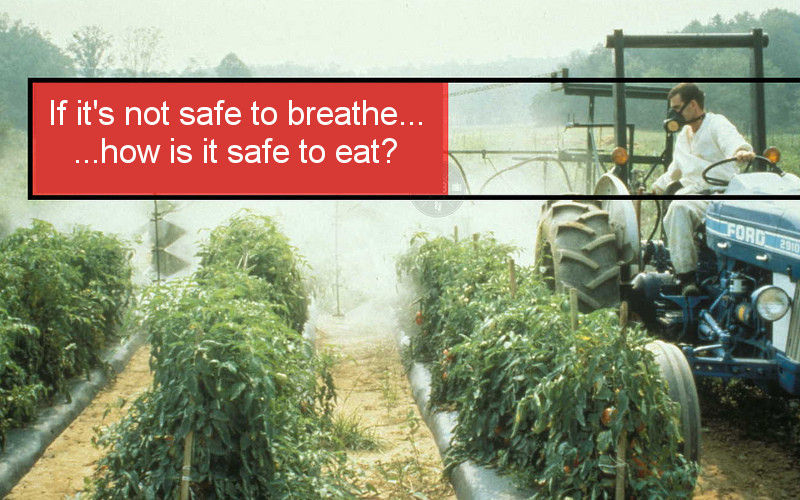 All sorts of people, from environmentalists to farmers, scientists, and gardeners have long been warning about the dangers of pesticides and large agro-business farming. Many people no longer need convincing; they’ve cut back on conventional produce and are maybe educating themselves on matters of food security and food production. In case you were wondering what science has recently discovered about the harms of putting chemicals in our food, look no further. Here’s a brief rundown of how our modern food system might just be putting our health at risk.

One particular ingredient in many pesticides, organophosphates, has been linked to brain development and IQ levels by studies performed at several American universities. Organophosphates are very common in pesticides because they have been useful in increasing food productivity in recent times. The pesticide works by breaking down the neurotransmitters of insects, when, in fact, humans’ neurotransmitters are also potentially affected by the pesticide. Surprising, right? You don’t need to be a scientist to understand why people, and not just insects, consuming the pesticides is problematic.

Pesticides are meant to cause neurological harm. Naturally, if they are effective in small amounts towards bugs, than as they build up in our systems they are bound to cause humans harm as well. Organophosphates have most recently been linked to brain development disorders, learning disabilities, and lower IQ’s. Essentially causing behavioral disorders such as ADHD on one end, and on the other, neurodegenerative diseases such as Parkinson’s. It isn’t only farmers who are showing high signs of pesticide exposure, it’s urban populations as well, meaning the reach of pesticide harm is much farther than the agricultural fields.

Through studies involving pregnant women, scientists are now seeing links between pesticide exposure and neurological and developmental disorders. Other studies have shown the link between air pollution and similar developmental issues. Autism, in particular, has been linked to pollution levels– not as a cause, but potentially as a complicating factor.

Another concern in our produce is the herbicide called Glyphosate, or more commonly referred to as “round-up” herbicide. A German study concluded this year found that many people and animals all over Europe have levels of Glyphosate in their urine from 5 to 20 times higher than what is legal for drinking water. The study intentionally took samples from people living in urban areas, who had no direct contact with the herbicide in their day-to-day lives.

Glyphosate is used effectively to kill weeds in between food crops. Plants are genetically modified to be resistant to the herbicide, so that fields may be sprayed with to fight weeds. Inevitably, residues from the herbicide are left on the crops themselves and enter the food system. Round up herbicides don’t stop there, though; there is lots of evidence that they easily enter water systems as well, and even contaminate groundwater.

Like organophosphates, glyphosate have been linked to neurological problems. In addition, they have also been sited as causing cancer. Talk about counteracting the natural antioxidant properties of many fruits and vegetables, right?

In the United States, Monsanto is the big offender in terms of herbicide use. In fact, it was Monsanto that developed and patented a lot of round of herbicides and GMO crops that are resistant to it. This year the Environmental Protection Agency even upped the amount of glyphosates permitted in both food and oilseed crops. The amount that is now permitted is well over what is needed to create breast cancer cells.

Ironically, Roundup might leech vital nutrients from food crops, meaning that GMO produce might not be giving us as many nutrients as we think it is when we eat it. People could potentially then have nutritionally deficiencies simply from eating conventional food crops. Generally, it is GMO produce that is contains the highest levels of pesticide and herbicide residues because they have been engineered to be resistant to what would normally kill them; as a result, farmers spray their GMO crops in huge quantities.

Herbicides have recently been linked to other health issues such as allergies, weight issues, and depression. Of course our diet affects much more than we even realize it does; we are only just coming to terms with the extent of the damage.

It is worth noting that some of the crops that are generally most likely to contain high toxicity levels from GMOs and these herbicides and pesticides are sugar, corn, wheat, and soy.

With all of this heavy information presented to us, what does it all come down? Basically, everything in moderation. Buy organic when you can and wash your produce, and, if you have the ability to, friend a farmer and know where your food is coming from!