The Real Deal on Kale and Your Thyroid 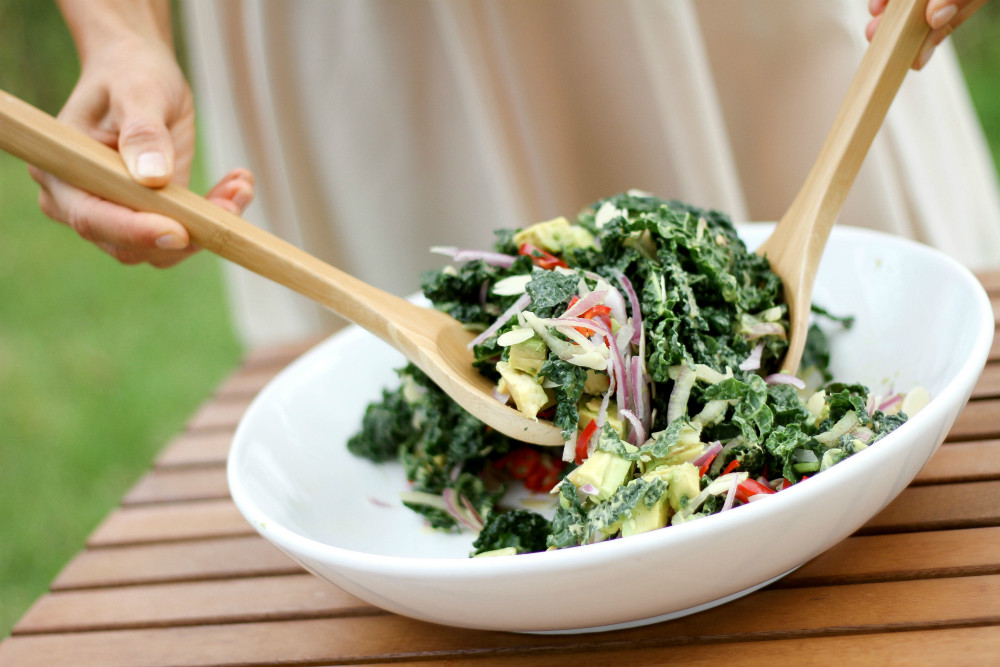 Kale yeah, kale is still magnificent! Similar to A-list celebrities, kale – once touted for its infinitely breathtaking nutrient composition, its superhero ability to stave off chronic disease risk, and its detoxification dexterity  –  has recently been bad-mouthed by the press and then thrown to the wayside, leaving it feeling unappreciated. Why was kale been kicked to the curb along with its cruciferous cousins?

Because it contains a compound called “goitrogens.” Fancy as it all sounds, goitrogens are simply any substances that can contribute to the development of a goiter, which is an abnormally enlarged thyroid gland, indicating either over- or under-production of thyroid hormones. Most commonly, goiters are caused by a deficiency in the mineral iodine. Another mineral, selenium, is also required for optimal thyroid function, and a deficiency can increase risk for goiters and thyroid problems, particularly when occurring together with iodine deficiency.

Both iodine and selenium are essential minerals found sparsely and inconsistently in the food supply. Approximately one-third of the global population suffers from iodine deficiency and subsequent thyroid problems are common in these people, mostly found in remote, mountainous regions around the world. When the body does not have adequate iodine to meet thyroid hormone production needs, the pituitary gland releases hormones that cause the thyroid gland to enlarge in a compensatory response. This increases the surface area, helping to increase blood supply in search of more iodine from dietary sources, causing a goiter to appear.

So what does kale have to do with all of this? Kale and other cruciferous vegetables contain phytochemicals called glucosinolates. These nutrients convert into isothiocyanates in the body when consumed, particularly in their raw form, via the enzyme myrosinase. Isothiocyanates have been found to help detoxify, fight cancer cell growth, and act as antioxidants, so they live up to their powerhouse prominence. However, the metabolites of these compounds compete with iodine for uptake into the thyroid. Thus, excessive intakes of isothiocyanates have been associated with a potential risk to thyroid function, especially in the presence of an iodine or selenium deficiency.

Now, when I say “excessive,” I am referring to extremely excessive. Excessive as in eating pounds and pounds of raw cruciferous vegetables a day, something most people do not typically do (even though some may strive to). A more balanced, regular, daily consumption of kale and other cruciferous vegetables is perfectly safe (and beneficial) for the majority of people with a healthy thyroid and adequate iodine and selenium intake. Also of note is the fact that isothiocyanates are sensitive to heat and are mostly deactivated with cooking. Thus, mixing up your cruciferi as both cooked and raw could offer some advantages.

Cruciferous vegetables are extraordinarily health-promoting and have been shown to exert powerful anti-inflammatory and antioxidant effects, reducing risk for many chronic diseases and supporting immune health. Kale, specifically, is loaded with vitamins K, C, carotenoids, iron, calcium, omega-3 fats, and much, much more.

Even for those with thyroid issues, consult with your healthcare practitioner, but it is possible to still consume cruciferous veggies safely and gain all of the awe-inspiring benefits. So enjoy your kale, both raw and cooked, but stay on top of your iodine and selenium intake. Adults aged 14 and up require 150 micrograms a day, and this can be found in sea vegetables, iodized salt (which is not as commonly used these days), and in supplement form. Selenium, needed in adults over 14 years old at 55 micrograms a day, can be found in just one or two Brazil nuts, as well as in smaller doses in other nuts, seeds, beans, and whole grains.

So, the final verdict? Long live kale in all its delicious, nutritious magnificence!