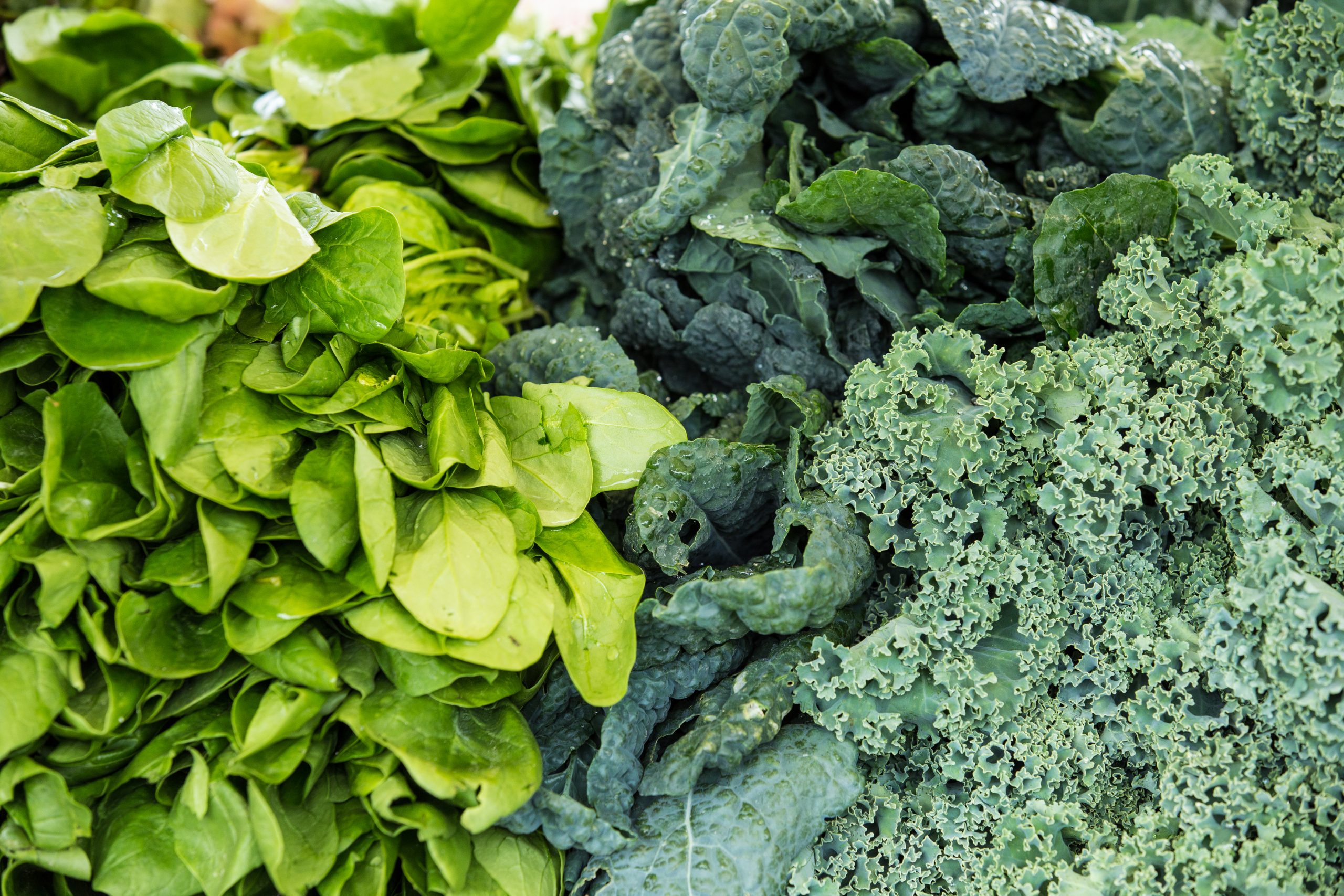 There’s a consensus about dark leafy greens: they’re good for your health. Back in the day, you might have been influenced by Popeye to down that spinach to get big and strong.  Now, kale is all the rage. This trendy veggie has even been deemed the “queen of the greens.” But, between one leaf and another, what makes spinach and kale so nutritious? Let’s check out and compare the nutrients of these super veggies.

Kale, also known as borecole, is part of the Brassica family that includes cruciferous vegetables such as cabbage, collards, broccoli, and Brussel sprouts.  However, its curly dark leaves stand out among other vegetables for their high concentrations of antioxidant, anti-inflammatory, and anti-cancer nutrients.  Specifically, kale contains a high concentration of two types of antioxidants, carotenoids, and flavonoids.  The carotenoids present are mostly lutein and beta-carotene while over 45 different flavonoids have been identified in kale!  The carotenoid and flavonoids are useful in protecting the body from oxidative stress and health problems related to oxidative stress. A few examples of these health problems are cataracts, atherosclerosis, and chronic obstructive pulmonary disease.  One way to keep in good health?—easy, add some kale to your dinner plate.

There have even been studies describing kale as having the ability to lower the risk for five different types of cancer such as bladder, breast, colon, ovary, and prostate cancers.  What makes kale such a health powerhouse in the realm of anti-cancer benefits is the accumulation of glucosinolates, an organic compound, which is broken down into smaller compounds called isothiocyanates.  It is these smaller compounds that can restrain the activity of carcinogenic cells as well as stimulate the body’s detoxification system, further helping to prevent cancer.

Additionally, kale has been recognized for its great health benefits and nutrient-dense properties by the Aggregate Nutrient Density Index (ANDI). This score shows the nutrient density of a food on a scale from 1 to 1000 based on its content of micronutrients, vitamins, minerals, phytochemicals, and antioxidant capacities. A cup of boiled kale has a score of 1000! Although raw kale has many health benefits, cooking or steaming kale can give it an extra boost. Take a look at all the nutrients found in a cup of cooked kale below.

Vitamin K is part of photosynthesis so all green vegetables contain varying levels; yet, kale is at the top of the chart for the highest concentration. This vitamin is best known for its ability to help blood clots but also has a noteworthy status for the proper functioning of bone-dependent proteins.

But, maybe kale isn’t quite your favorite green. Or, maybe you’ve got a killer spinach recipe to try out. Don’t worry; these leaves come with a lot of nutrients as well. Spinach belongs to the Amaranthaceae family, known sometimes as the Goosefoot family. Chard, beetroots, and would you have guessed, quinoa, are all cousins of spinach in this family.

Like kale, spinach has many anti-cancer carotenoids.  These carotenoids are called epoxyxanthophylls and are plentiful in spinach.  Epoxyxanthophylls have been found to provide significant protection against the occurrence of aggressive prostate cancer.  Even when unrelated to cancer, excessive inflammation has been shown to decrease thanks to the epoxyxanthophylls in spinach. Moreover, spinach has plenty of other carotenoids including beta-carotene, lutein, and zeaxanthin as well as some flavonoids but not quite as many as in kale. The carotenoids in spinach help against inflammatory problems, oxidative stress-related problems, cardiovascular problems, bone problems, and cancers in a way similar to the benefits of kale.  In addition, spinach is an excellent source of glycoglycerolipids. These fat-related molecules found in plants help protect the lining of the digestive tract from damage, especially damage related to unwanted inflammation.

On the Aggregate Nutrient Density Index, spinach doesn’t fall far behind kale’s top ranking of 1000 by securing a score of 739 for itself. Check out spinach’s top ten nutrients and the nutritional punch it packs in just one cup! Popeye wasn’t messing around.

Although spinach doesn’t have quite as much Vitamin K as kale (but it still has a huge concentration!), it’s important to note that spinach does have a large amount of calcium and magnesium which are other bone-supportive nutrients to maintain bone health.  Additionally, spinach is an excellent source of vitamin E and has a little more manganese than kale which further aids in the reduction of the risk of health problems related to oxidative stress. Furthermore, spinach has a whopping 377% DV of vitamin A which is essential for the promotion of general growth, maintenance of visual function, regulation of tissue, and embryonic development.

Even though the two dark leafy greens share many similar health benefits, spinach and kale can each make a claim for fame with their stellar levels of vitamin A and K, respectively.  You can’t go wrong with the health perks from the rest of the nutrients either.  Not to mention, spinach and kale are also great sources of omega-3s! Since both are so nutritious for everyday diet, let your taste buds decide which to serve for dinner! ;)