How, When and Where to Find Morel Mushrooms, Springtime’s Prize-Winning Fungi

To say morel mushrooms are a beloved find for foragers is an understatement. Not only do they represent the return of the mushroom hunting for the year, but they are considered a choice edible. Plus, finding one is even more rewarding because they can be rather elusive, but where they do pop up, there are usually more nearby.

Unlike many popular mushrooms such as portabellas, shiitake and oyster, morels are also special to and for foragers because they can’t be cultivated. In fact, the morel season is rather fleeting, making them, like fresh asparagus, all the more sought after. They are something that only occurs in the wild, and they are delicious, a bit nutty with a meat-like texture (for those of us who still like that).

For those inexperienced or uninterested in foraging for mushrooms, they can often been found in farmers’ markets, though they can get up to $200 or $300 a pound. For would-be foragers, the great news is that they are considered an easy-to-id find. Regardless, morels are a great gift from nature that we should all enjoy at least once in our life.

Particularly when foraging, knowing what we are looking for is always useful, and morels are distinctive mushrooms, which is helpful. Morels don’t have the classic cap shape we associate with mushroom; rather, they have somewhat conical caps that have a deep honeycomb structure and are hollow inside. The caps tend to be some version of brown, while the stems—smooth and hollow—are lighter than they caps, typically something akin to off-white. They can be small enough to fit two or three in a hand or large enough to fill two hands. 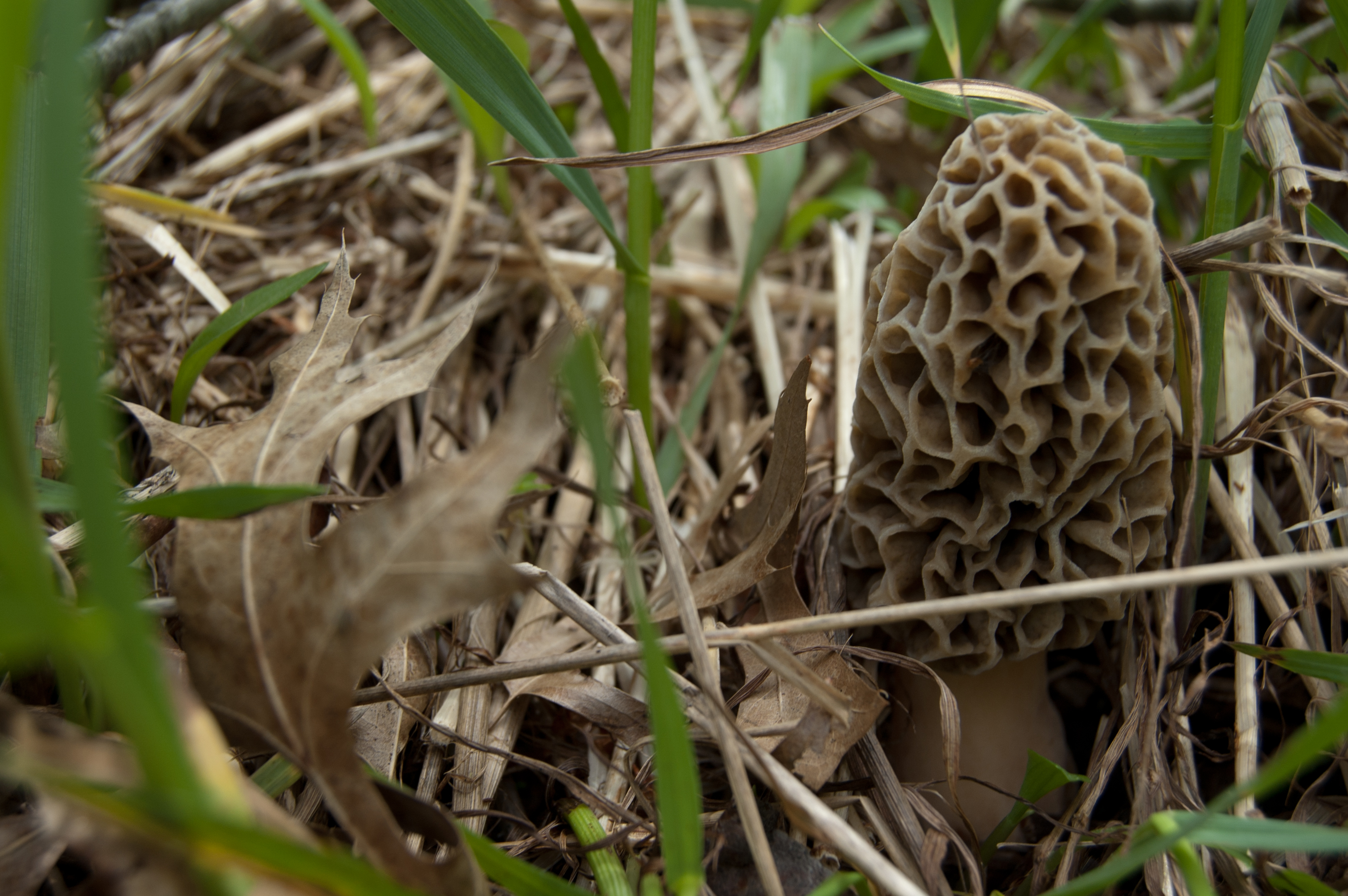 Morels can be found from California to North Carolina in the US, and in parts of Southeast Asia, India, Pakistan and Turkey. They are also in southern Canada. They tend to grow beneath trees or where trees recently stood, and dying trees are primo foraging grounds. Ash, elm, apple and juniper (in Texas) are all trees morels like to congregate around. They grow on the ground and, thus, are often covered with plants or forest litter. They like the sun-facing side of hills, where the soils warm up sooner, and they prefer moist, alkaline soils. This means old gravel roads for logging trucks, areas with limestone, and spots near streams are good places to start looking. Deserts are not.

When They Pop Up

They mostly like to show up in early spring, with a preference for days that consistently reach 60 degrees Fahrenheit and nights that drop towards 40. The often appear after rains, and they famously find spots where wildfires have happened. Wood ash is alkaline. In some Southern states, they may appear in fall for a second round, and in parts of Coastal California, where temperatures are more moderate, they can show up year-round. The temperature and moisture levels are the best way to key in to when.

How to Know They Are Morels

Crucial to foraging any mushroom or plant is knowing what they might get mixed-up with, particularly poisonous stuff. Morels tend to have caps that are longer than stems. They are more than likely going to appear in the springtime. The spore print—these are fun to do—should be cream to yellow. Here are some other important comparisons:

Why Be Careful When Foraging Morels

It’s absolutely imperative when foraging mushrooms to be careful and diligent. While it isn’t nearly as difficult as people think it is, mistakes—even those that aren’t lethal—can still be costly, and they are completely, easily avoidable. Be sure to actually read this article, as well as others, before attempting to forage morels. Even after that, it’s a good idea to consult an expert and/or mushroom identification forums to help with identifying your first mushroom. All that said, don’t skip out on the morel. It’s a delicious delight.