7 Mushrooms That Can Be Harvested From the Wild 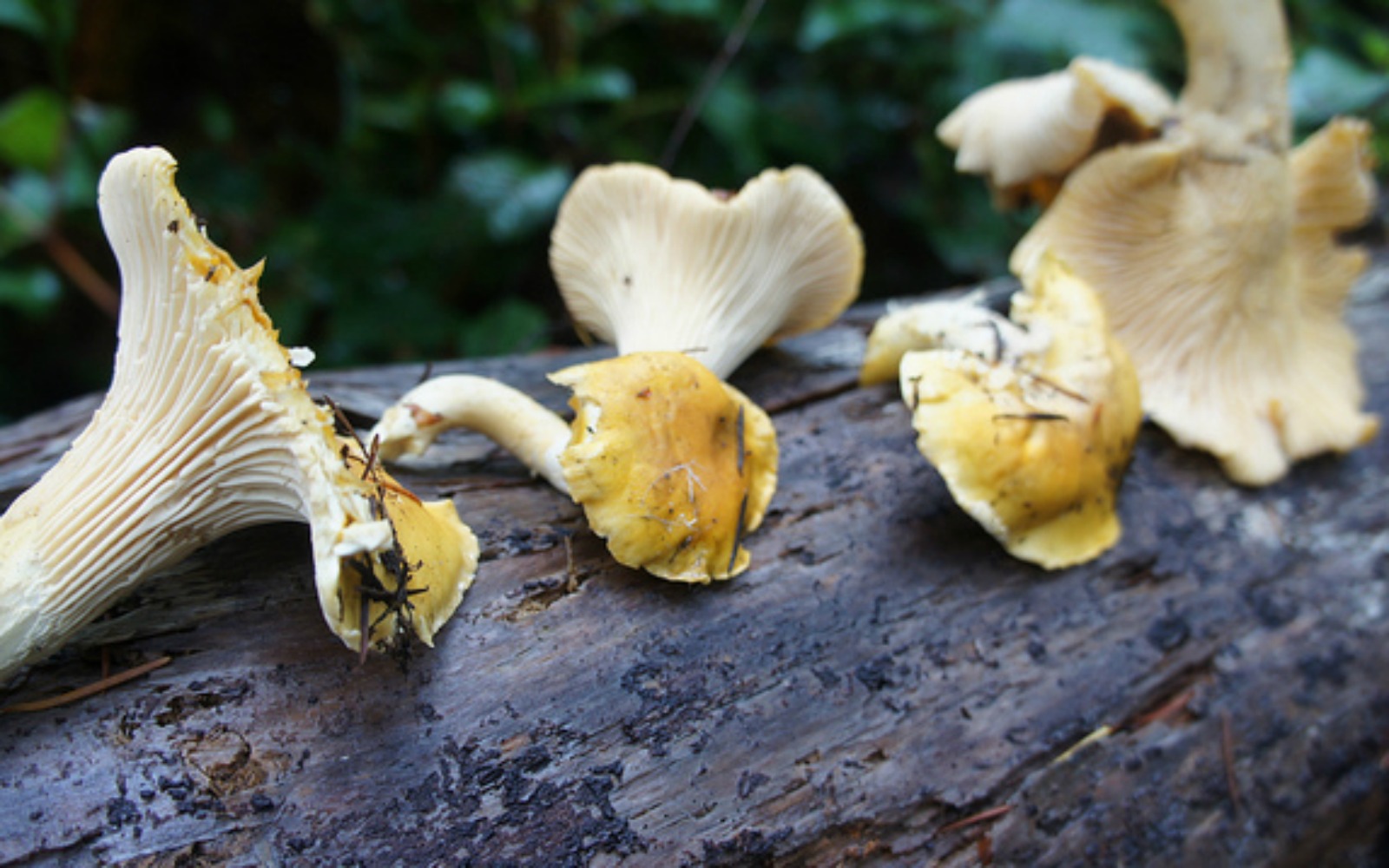 The idea of foraging for mushrooms seems almost magical and certainly naughty. The magic is that there are so many mushrooms out there, and seemingly only wizard or conjurer of potions could identify what is and isn’t to be included. Then, it feels naughty because most of us grew up with stiff warnings to never eat mushrooms from the forest, as we would certainly poison ourselves.

The truth of the matter is that tons of people go out foraging for mushrooms and rarely do they kill themselves. The other truth, however, is that there are some incredibly toxic mistakes to be made both for inexperienced and experienced foragers. In order to get into the mushroom game, it’s best to pick a few common, easily identifiable fungi that can’t easily be confused with those we don’t want to eat. (Of course, growing your own mushrooms is always an option as well.)

It’s also probably best practice to have some experienced with mushroom foraging help in the beginning, but to enlightened readers as to the some of the possibilities, here are some great starter mushrooms, some familiar and others not, for new foragers. (And here are thirty recipes to help put them on the table!) 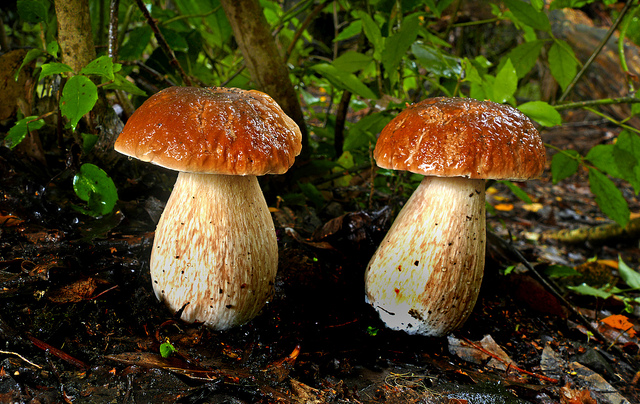 Porcini (Boletus edulis) mushrooms, also commonly known as penny bun boletus are a familiar name for most mushroom lovers. They are common in supermarkets, and they are a highly sought after culinary ingredient.

Porcinis grow from mid-summer into November, and they prefer mixed woodlands as their home. The caps are brown and convex, and the stem is cream-colored with brown streaks, swollen at the base, and has a white network at the top. 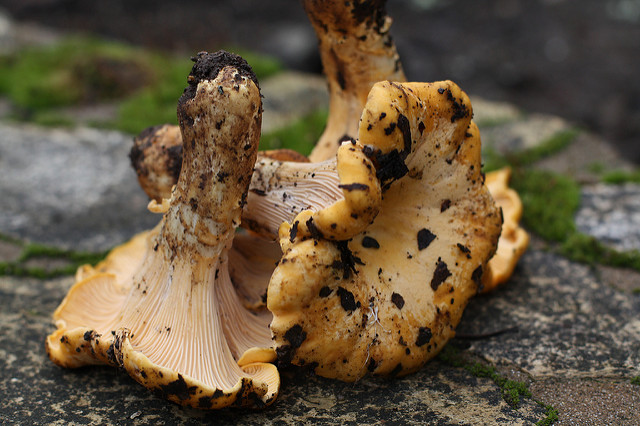 Also familiar to most mushroom fans, the chanterelle (Cantharellus cibarius) is an excellent mushroom, beloved for its firm texture and pleasing aroma. They are also a somewhat wild looking mushroom, without that classic dome lid, so they have a memorable appearance on a plate.

Chanterelles grow in troops (spread-out clusters) in acidic soil near both deciduous and coniferous trees. They have distinctive golden-yellow color, with caps that have wavy edges and can sometimes be convex. The stems are the same color, as well as short and stout 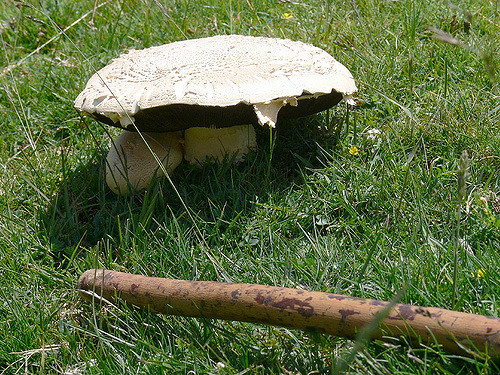 Funny how putting field as part of the name of something makes it sound like a rather blasé subject. Field mushrooms (Agaricus campestris), to be honest, are rather standard-looking, which in no way means they aren’t perfectly delicious (as standard mushrooms are).

As their name suggests, they grow in pastures, mostly in the months of August and September. They are creamy white with dark brown gills and have short stems, not unlike the “white mushrooms” found in supermarkets. 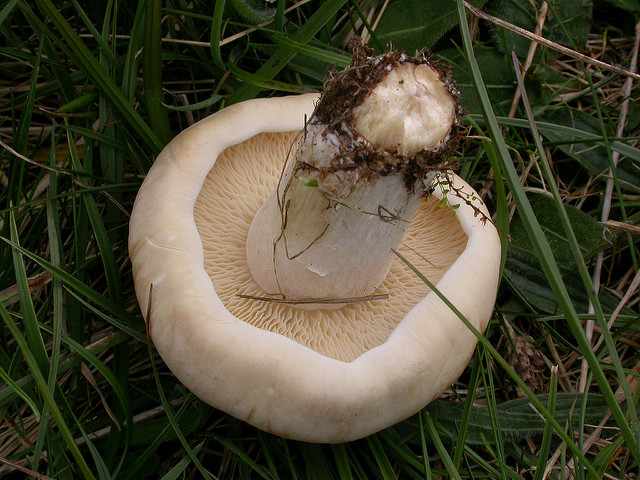 Funny how putting the title of a saint on something makes it sound rather distinguished and impressive. In reality, St. Georges mushrooms (Calocybe gambosum) are fairly common mushrooms, but as foraged food, it does have some notable qualities to appreciate.

Firstly, St. Georges are a springtime mushroom, which is less common than in the autumn. It has an irregularly shaped, cream cap with a fairly classic (supermarket) mushroom silhouette. It’s mostly white, gills and stem, and is found in pastures and along woodland edges. 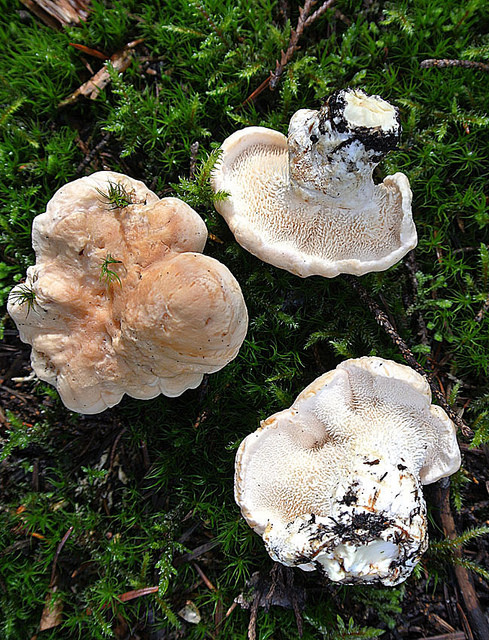 Hedgehog mushrooms (Hydnum repandum), otherwise known as wood urchins, are another common variety for beginners to latch onto. They don’t have a particularly notable flavor, but they have that nice, firm texture plant-based eaters often look for in mushrooms.

The caps of hedgehogs are pinkish, sometimes orangey-pinkish, with irregular lobed edges that many overlaps. The stem is short, brittle, lighter (than the cap), and usually off-center. Like chanterelles, these grow in troops on the ground near both deciduous and coniferous trees throughout the late-summer and fall. 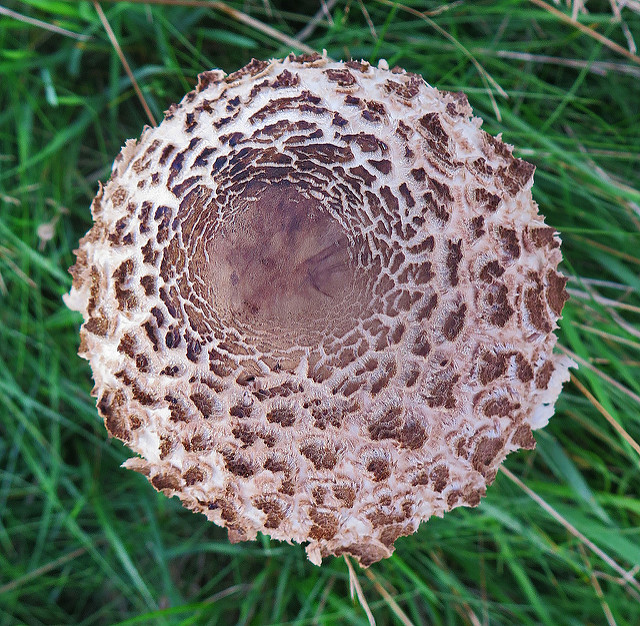 Frankly, the names of mushrooms are fun and illuminating, and parasols (Macrolepiota procera) are no different. These are known for a spongy texture and strong flavor, though the stems can be tough and might be better off tossed.

The name, in fact, says it all: These mushrooms function just like parasols, remaining tight, kind of egg-shaped until they ultimately spread out umbrella-like at the top. The cap has dark scales everywhere, and the stem is tall and slender with similar scales. They grow in pastures and open woodlands, often in a ring, from roughly July to October. 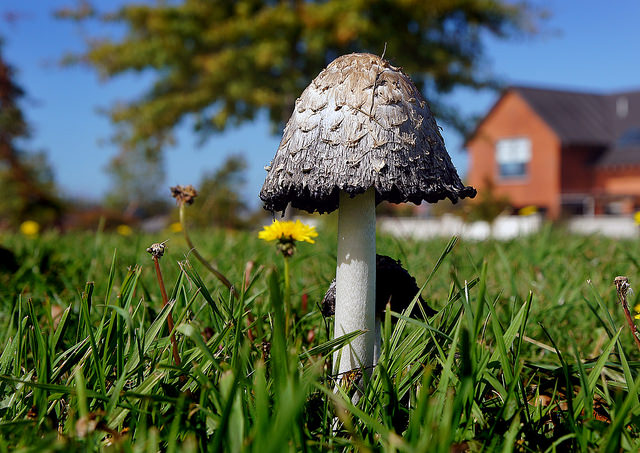 Again, just when the names seem to have run out, the mushroom parents get funky again. Shaggy inkcaps (Coprinus comatus), or equally entertainingly known as lawyers wig, are known to be very tasty, but they need to be eaten when young, i.e. while the gills are still pale.

Shaggy Inkcaps are commonly found in grass or along paths and roads. Their caps are tall and cylindrical with fibrous scales that denote the shagginess, and the stems, too, are tall, as well as hollow. They are an autumn mushroom, discovered mostly in September and October.

Obviously, foraging mushrooms is something to be done with due caution and respect, but harvesting mushrooms are also something that can be done by normal people (not wizards). It is one of the ways we can begin to take control of the food we eat. (Or, we can just start growing them on logs.)