How to Build a Solar Dehydrator 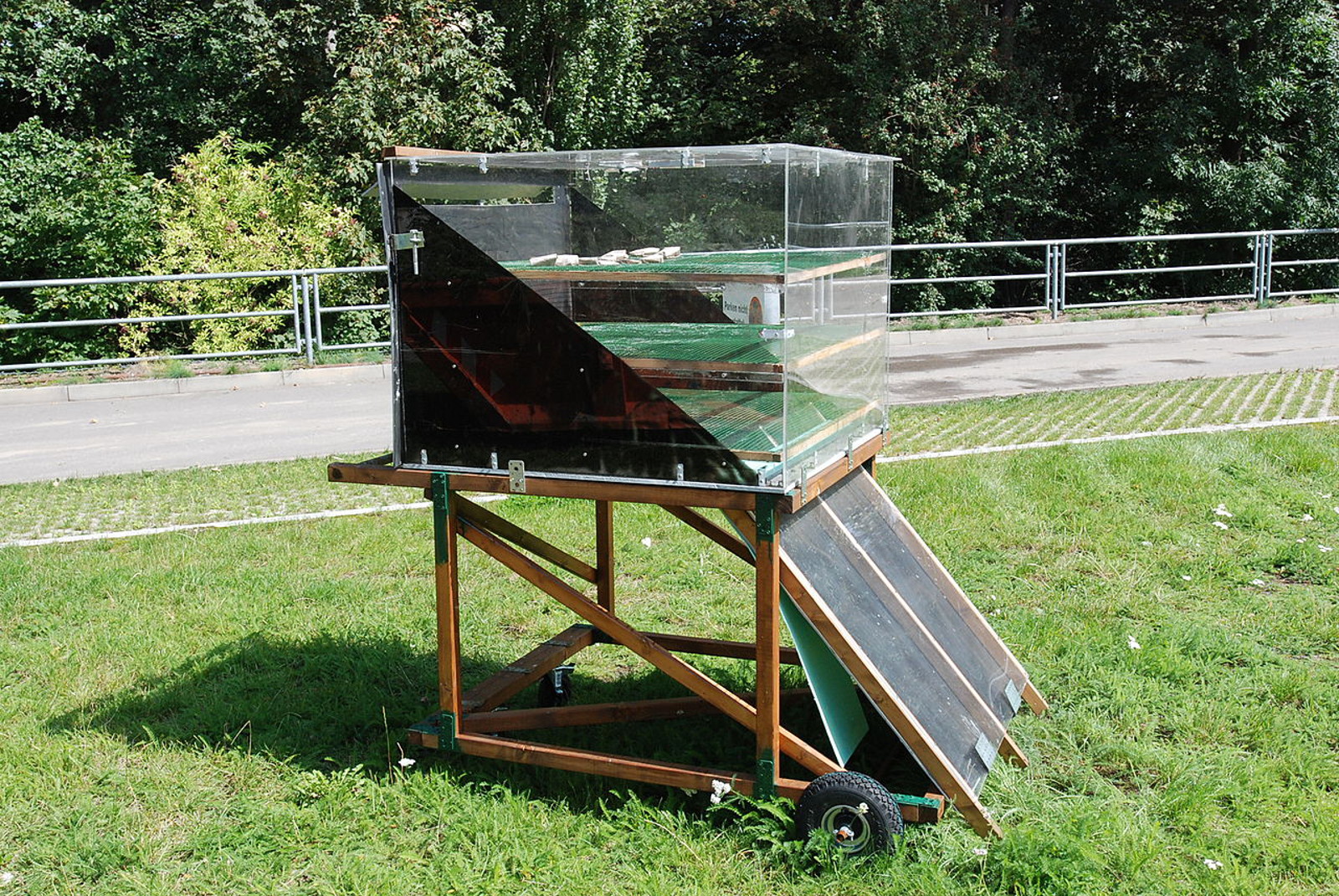 Dehydrating is a fine culinary art, a special means by which preserve food but, in doing so, only enhance the flavors, concentrating the acids, sugar and deliciousness into ready-when-you-are, chewy bites of delight. If dehydrating doesn’t excite us in at least some little way, then frankly we need to reexamine our priorities in life.

What’s more is that doing it by sun, no electricity involved, only ups the ante, turns the experience into a gloriously green triumph as well. However, with only minimal carpentry skills, fairly standard tools and the basic concept, it’s possible to start dehydrating those tomatoes, the bananas, berries, herbs and more by sun in just a few carefully measured cuts and turns of the screw.

This just another fun-filled step en route to more self-sufficient living, a great way to take all those delicious fruits and vegetables growing out in the lawn or in the pots around the house and making something useful in the kitchen, something the family, friends or just you are bound to enjoy.

How to Think About This Project 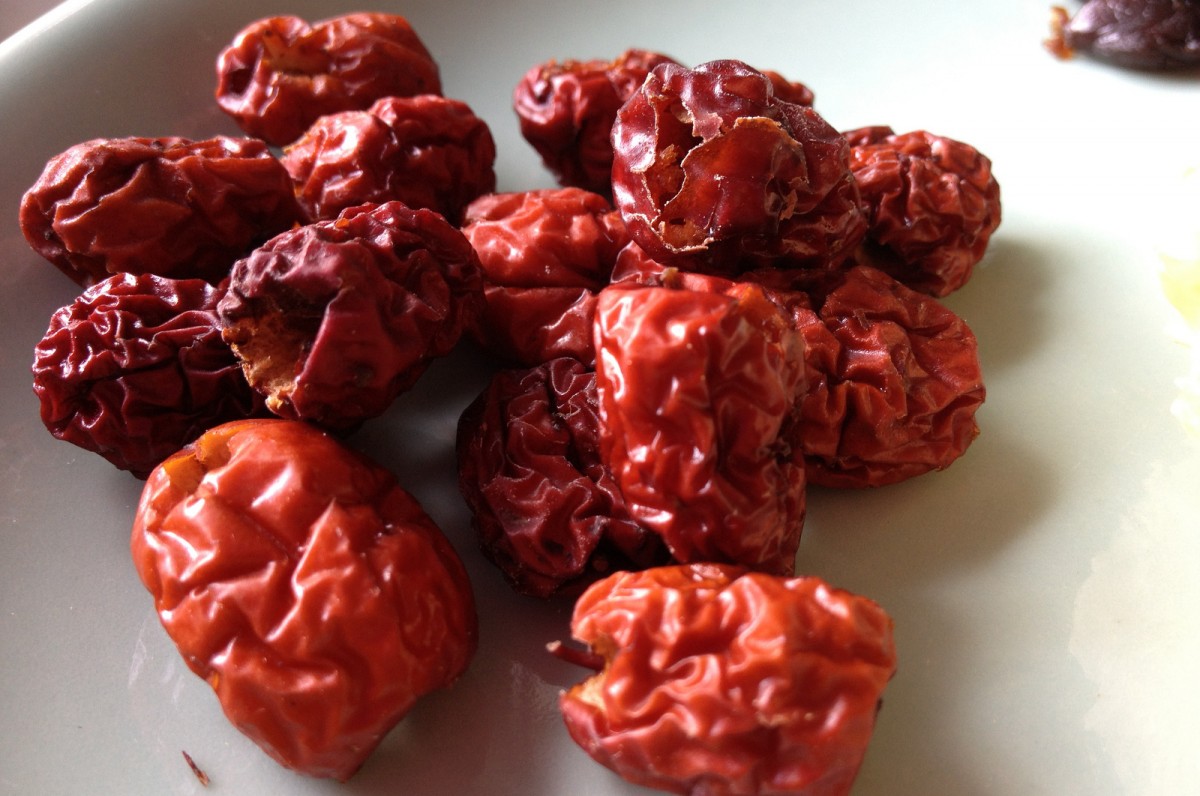 For those of us who have been around electric dehydrators, we are familiar with low hum of the air coursing through the machine, and herein lies the crux of what makes a dehydrator a dehydrator and not an oven: air flow. When dehydrating, we are not trying to cook the food but rather remove the moisture from it, so while some heat helps (and our dehydrators will get hot), it’s the movement of air around the food that takes the moisture out.

To do this effectively in a passive solar unit include vents that allow air in at the bottom of the dehydrating box and air to escape at the top. Because heat rises, the air passes from the bottom to the top, creating the result we are after. So, while solar dehydrators can often look like basic boxes, this element of air movement is what makes it a dehydrator and not a solar oven, which would be used for cooking.

Getting Your Things Gathered

Solar dehydrators, like anything, can be quite swanky if a builder is so inclined, but for those going green from the get-go, they can also be comprised of found wood, such as pallets or scraps found around construction sites, upcycled elements (maybe the racks from an old fridge or oven) and a creative mind. 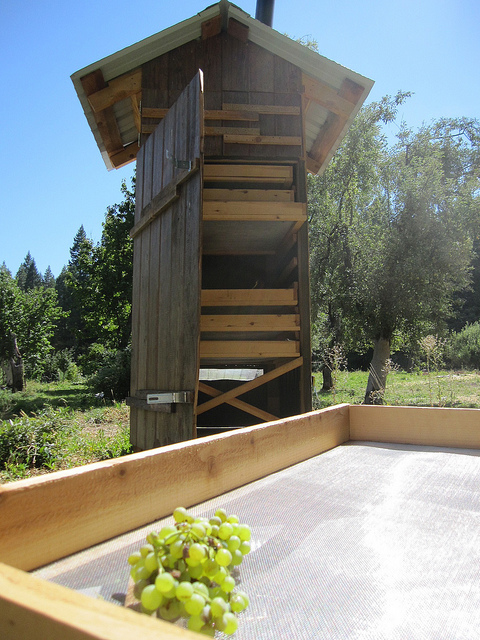 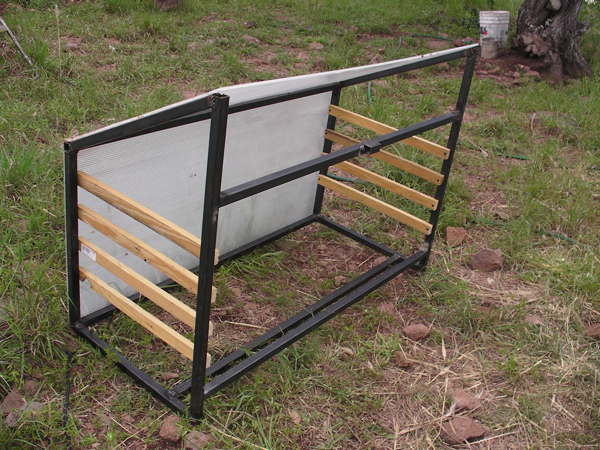 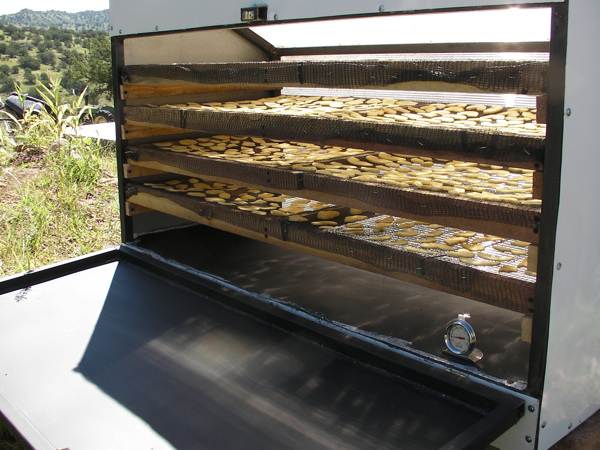 Otherwise, the quality of the construction will be on the builder. Using a screw and drill will create much tighter seams than hammer and nails. A good saw will help for more precise cuts. The door could open with hinges or it could be constructed to just slide into place. Many designs call for the boxes to be painted black to help with heat absorption, but others like to cover everything in foil for convection. Ultimately, that’s a personal choice. Both of these options have proven productive.

A Simple Plan for Beginners

This procedure can begin with the box or the racks. Either way, the second element in the order will simply be built to fit the first. So, before we think about it too much, let’s build a box, say two feet by two feet at the base by three feet high (this can be done, all sides supplied, with one piece of plywood). We’ll need three boards that are two feet by three, acting as our two sides and the back. Two boards that are two by two can be our top and bottom. And the front will be a two by three cut of window glass.

Inside the box, install a pair of rails on the side panels for each drying rack. One-by-ones or two-by-twos (something similar) will work just fine for this. Be sure to leave enough space between them for the racks to slide in comfortably. Measure down from the roof of the box to ensure that the rails are parallel and level. Then, continue down until there are enough rails for the drying racks.

For ventilation, simply cut three or four holes in the top, about three inches in diameter, and do the same along the bottoms of the two side panels. Put a mesh of screen over all of the holes to keep out any critters. This will produce the air flow needed. Paint the box black so that it’ll absorb more heat, and it should be ready to go. For more exact and complicated plans, including PDFs, follow this link to eight different options.

Solar dehydrators do take a bit longer than the electric ones, and obviously, a sunny day is the best time to do it. It’ll take some experimentation to get the whole thing fine-tuned, but at this point, we are ready to start playing.