How to Grow Rice on a Small Scale

Rice has been part of the human diet for millennia. It is actually the oldest recognized food that is common to today’s table. That is not a great surprise. It is loaded with nutrition, including a good amount of protein and complex carbohydrates. It fills a belly, offering a good substitute for modern Western diets that rely heavily on bread, potato and pasta. And in some form or another, rice can be grown just about anywhere.

In much of North America, wild rice — not actually rice, but for our purposes it is — has been cultivated since prehistoric times. While people generally associate rice growing with terraced paddies, such as in Indonesia, the contemporary food-grower in suburban America cannot really produce our own rice this way. However, we do have the capacity to grow some, and it is a pretty cool thing to do.

Like with so many great gardening projects — worm composting, growing towers, potato buckets — we need to find ourselves an upcycled food-grade, five-gallon bucket before we get started.

Rice growing begins with rice seeds, and as most of us know, though we may have never cultivated rice ourselves, this is a very thirsty crop. That is why it is typically grown in flooded paddies rather than in fields, like other crops. So, not surprisingly, as is the case with many seeds, rice does best when soaked in a bowl of water before being planted.

According to an amazing reference book, The Resilient Farm and Homestead (check the library), this process lasts about a week. The seeds are rinsed at least once a day during this time and are constantly in water. Ultimately, we are looking for a radical, which is a tiny rootlet, to emerge. Once that happens, we are ready to move on.

At this point, the viable rice seeds — those with a radical rootlet — can be moved into their buckets. The buckets should be filled with a good potting soil up to about five inches from the rim of the bucket. The rice seeds can then be planted about a half-inch deep in the soil — three per bucket — with a spacing of roughly six or more inches between them.

At this point, the bucket needs to be filled with water so that it almost reaches the rim. Ideally, the rice is put in a sunny spot that stays around 75 degrees Fahrenheit. It is very important in the early days that the water level is carefully maintained, never dropping below two inches above the soil. This should be maintained until the rice stalks grow to about six inches tall. 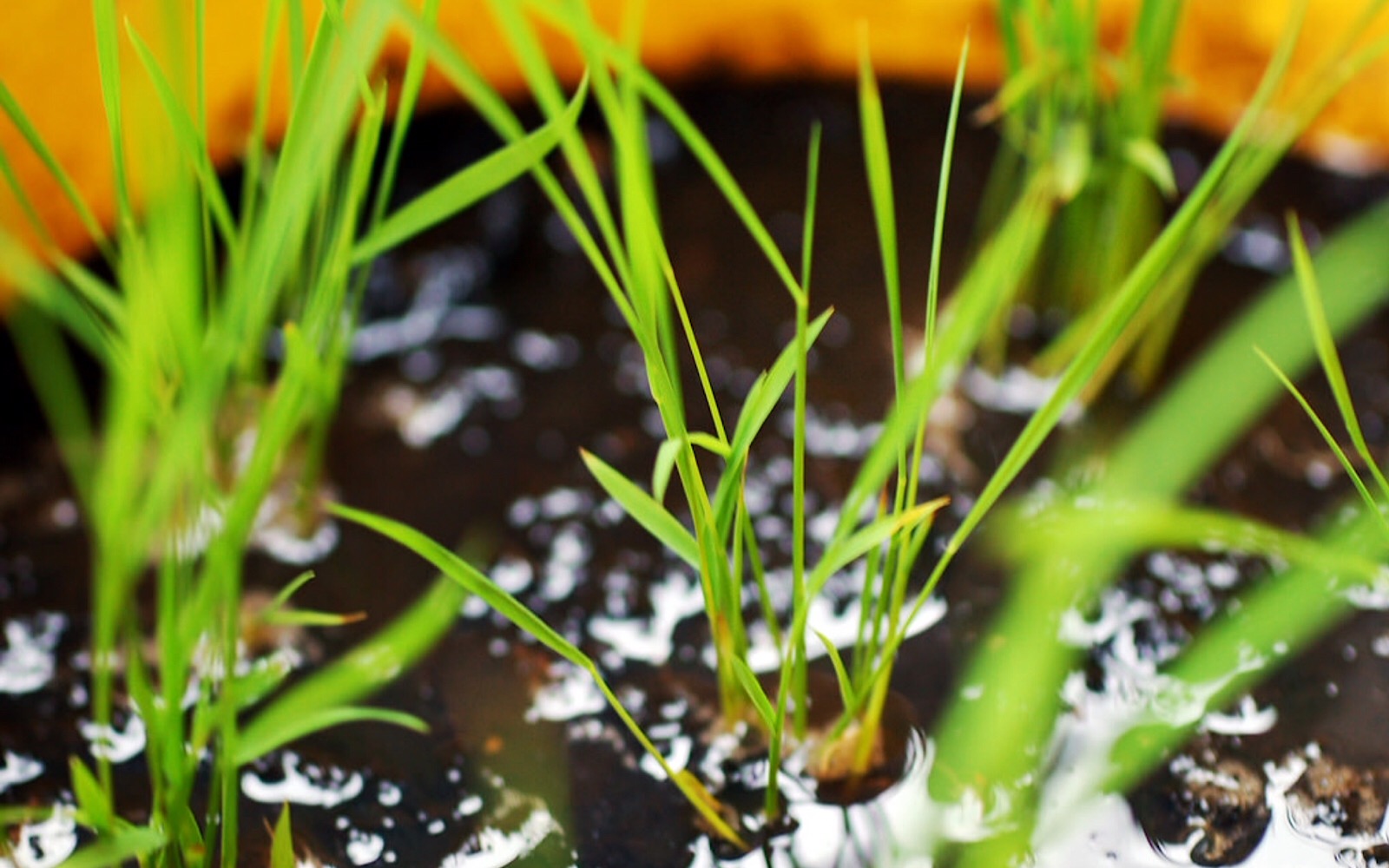 Once the rice stalks reach about six inches, the water level should be raised to four inches one final time, and after that, it is a waiting game. All in all, rice takes roughly five months to reach the right level. For growers starting in mid-April, that means the magic should happen around mid-September.

Generally, seed heads show up around July and are fully established about a month later. At this time, the plants stop growing. Now, we actually want less water so that the heads begin to dry and harden. The seeds should also be brown. If they emit a milky substance, then they likely have a couple more weeks to go.

After four to five months of nurturing this crop, growers will likely be ready to eat, but a little more time is necessary. Harvesting consists of cutting the stalks down, bunching them together, and allowing them to dry for another month. After this, the rice has to be de-hulled, the biggest challenge of the process.

For our small-scale adventure of bucket-grown rice, a stone roller can be used to remove the hull. For 50 pounds of rice, this would be a painstaking a process, but for experimentation, it will work. Then, the debris is separated from the rice by pouring it in front of a fan for the chaff to winnow.

Be careful cooking it. It doesn’t take nearly as long or nearly as much water. And, it is going to taste much better!