Why the Words of the Lorax Matter Now More Than Ever 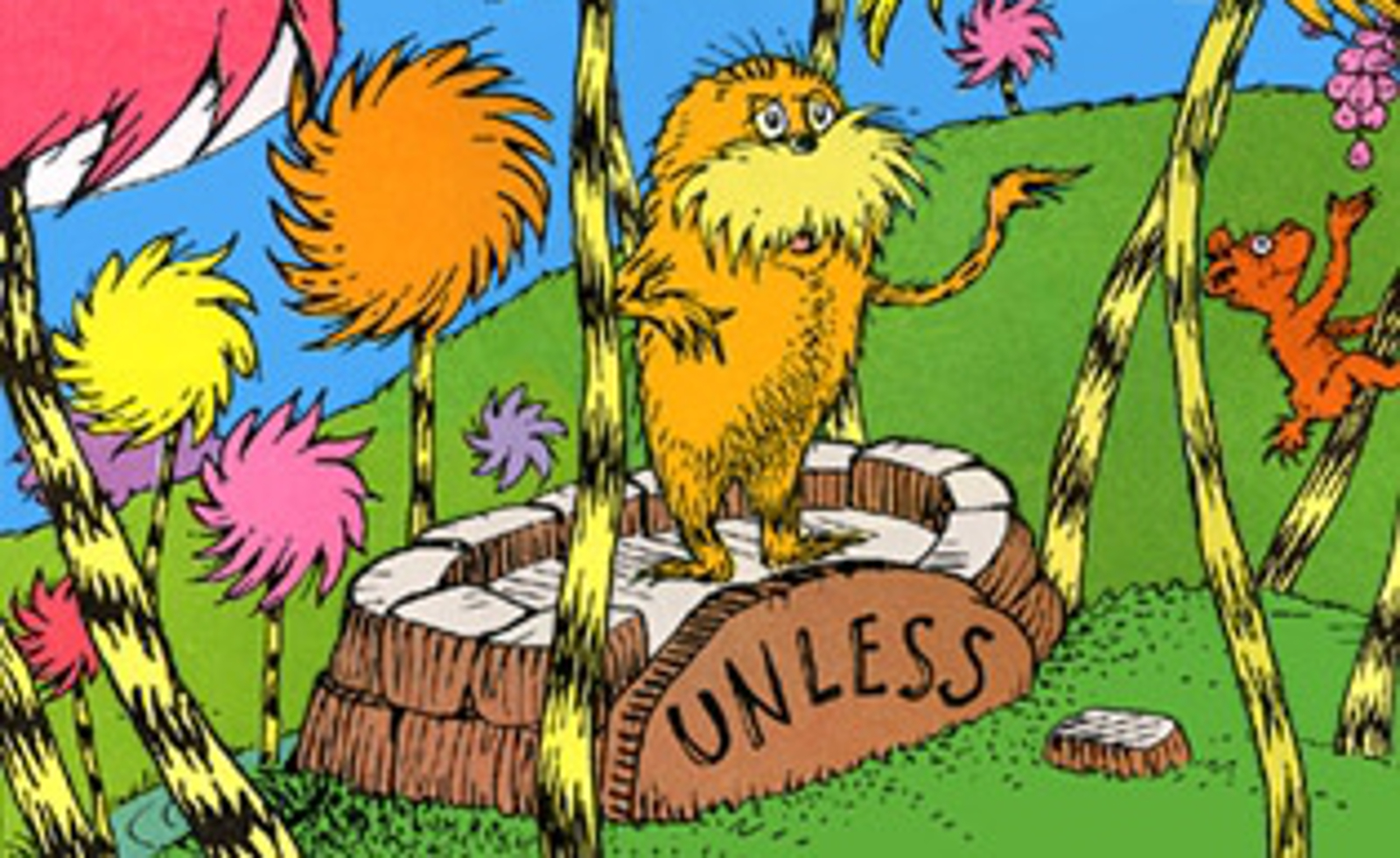 The United States experienced a wave of activity and awareness for the environmental movement during the 1970s. The decade saw the first national Earth Day as well as the establishment of the Environmental Protection Agency (EPA) in 1970, the banning of DDT in 1972, the passage of the Endangered Species Act in 1973, and the nuclear meltdown of Three Mile Island in 1979. A very important children’s book about the environment was also published during this time frame. In 1971, Theodor Seuss Geisel, or Dr. Seuss, published “The Lorax” and the worlds of both literature and the environmental movement have not been the same since.

“The Lorax,” in short, is a story about the dangers of unrestrained growth and the ultimate need for individual action to maintain hope for the environment. In the story, the Once-ler discovers Truffula trees and hatches up a plan to turn them into thneeds. Upon cutting down the first Truffula tree, the Lorax appears to “speak for the trees for the trees have no tongues.” The small, hairy character trails the Once-ler during the growth of his business and points out the environmental destruction that happens as a result, warning him of the dangers of his greed. The Bar-ba-loots are forced to leave town as there are no more Truffula fruits to eat. The Swomee Swans, with “smogulous smog” in their lungs, also fly for clearer skies. And the Humming Fish which cannot live in “gluppity glop” and “schloppity schlop” go in search of clean water. Finally, once the last Truffula tree is chopped down, thneed production stops and the Lorax lifts himself by the seat of his pants and flies away, leaving behind a rock with a single word etched on it: “Unless.” As the Once-ler explains to a young boy that has come to speak to him, “Unless someone like you cares a whole awful lot, nothing is going to get better. It’s not.” And with that he tosses the boy the last Truffula seed, encouraging him to plant it with the hopes the Lorax and his friends will someday return.

On the surface, “The Lorax” may appear to be a typical children’s book with the creative rhymes, imaginative characters, and colorful illustrations common to Dr. Seuss. But the book has actually garnered much attention over the years for the valuable lessons the story has for adults acting on behalf of the environment.

There may not be an actual company manufacturing thneeds, but there are certainly modern-day equivalents to the massive, polluting corporations portrayed by Dr. Seuss in “The Lorax.” Unfortunately, environmental damage and destruction are all too common characteristics of major companies around the world. And the harm they cause in gathering resources and manufacturing their goods is equally as concerning as what the Once-ler did to the fictional land he lived in. 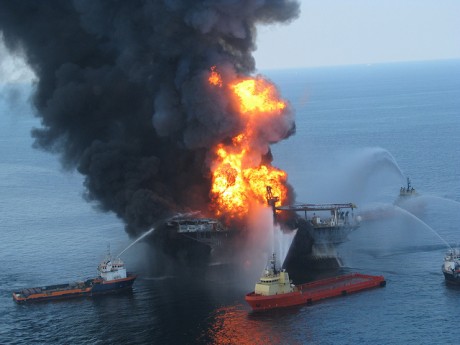 “Gluppity glup” and “schloppity schlop” in the form of run-away fertilizers, mining operation waste, industrial dumping, and oil spills are wreaking havoc on our aquatic ecosystems and fresh water resources. Excess fertilizers that runoff from massive agricultural operations eventually end up in fresh and salt water ecosystems, resulting in dead zones where algae blooms cause declines in oxygen, suffocating fish. In the United States, forty hardrock mining operations are known to produce up to 27 billion gallons of freshwater pollution every year.

That doesn’t even account for future mining operations or statistics that are merely predicted from additional mining operations currently in existence. In 2012, Environment America found that U.S. watersheds were polluted with 206 million pounds of toxins from industries including steel manufacturing, meat production, and chemical production. And marine ecosystems have suffered from such iconic oil spills as the Exxon Valdez of 1989 which discharged 11 million gallons of crude oil into Alaskan waters, and the 2010 BP Deepwater Horizon spill which leaked an estimated 3.19 million barrels of oil into the Gulf of Mexico.

With the massive amount of pollution we’re releasing into our fresh and salt water systems, we must begin to ask ourselves if the damage done is justifiable and what we can do to put an end to the destruction caused by this massive corporations. 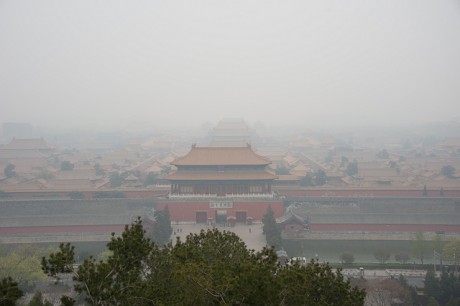 Air pollution, or “smogulous smog,” is just as much a problem in the present day as it was in Dr. Seuss’ fictional world. Images you may have seen of residents of China donning facemasks when going about their normal daily activities outside are not exaggerations of an air quality problem- they are the harsh reality of people that are forced to breath toxic air. Many large cities in China are gripped with dangerously toxic air conditions resulting from industrial production and pollution, the burning of coal, and automobile exhaust. The economy may see growth in the demands for new production, but what is a community where the people cannot even go outside without getting sick? And with increased global temperatures, smog worsens in response, resulting in additional poor air quality for both people and wildlife alike. This toxic air is not merely an idea thought up by a children’s writer, but rather is a harsh reality for far too many people worldwide.

The Loss of Our Truffula Trees 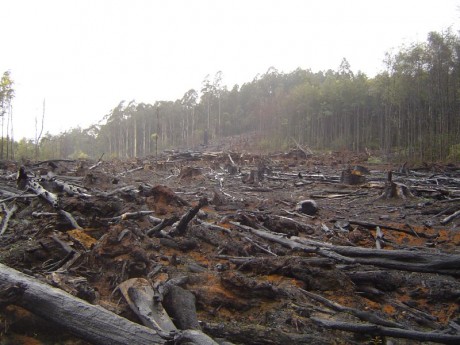 Even without Truffula trees to chop down in the real world, deforestation is still very much a problem outside of Dr. Seuss’ book. Trees are often looked to and exploited as natural resources in the same way the Once-ler obliterated the Truffula trees to make his thneeds. While forests cover roughly 30 percent of the earth’s land surface, that figure is declining at a rate of 18 million acres per year. Trees are cut down for timber, paper, and fuel to name a few uses. They are also cleared for the sake of creating more land for agricultural operations. The loss of trees results in loss of habitat for many creatures, as well as lost opportunities to absorb excess carbon dioxide in the atmosphere. Again, the economy may benefit as the result of this industrial growth, and yet the price for the planet and people is inconceivable.

When you look at the impact that humans have had on the planet, and especially through major business ventures, it’s easy to see the resemblance to the fictional world Dr. Seuss created in “The Lorax.” Both worlds paint a gloomy future where pollution and greed have replaced life and biodiversity. And yet, it has still not been decided that such a world is an unavoidable fate.

“The Lorax” may sometimes be criticized for being too dark and hopeless. The story does end without us ever actually knowing if the Truffula seed is planted and, ultimately, if the Lorax ever returns. Maybe the boy does as he’s asked and brings back the Truffula trees, or maybe he just throws the seed away and everything goes to Hell. It’s a very open-ended conclusion.

Or is it? What if the end of the story does not actually come with the final page of the book? Rather, what if the story merely continues with us?

As educated and informed environmental activists, we are well aware of the destruction that Mother Earth is enduring and the extent at which we’re losing the character of this planet. And we can have faith that this trend will continue if we chose to remain idle and paralyzed by fear. That is, “unless someone like you cares a whole awful lot, nothing is going to get better. It’s not.”