Get Inspired By These 5 People Who Have Found a Productive Way to Repurpose Plastic Waste!

Plastic, of some kind, can be found everywhere you turn in modern society. It is impossible to walk into an average grocery store without seeing huge amounts of it – although two pioneering waste-free bloggers, Lauren Singer and Daniel Silverstein, are aiming to launch a new zero-waste store in Brooklyn, NYC, that will buck this trend! Every year, we produce 300 million tons of plastic globally. Unfortunately, only an estimated 15 percent of the plastic we use is recycled. This can partly be attributed to the fact that plastic does not degrade easily. In fact, it can remain intact for up to a thousand years, before finally breaking down into countless, tiny microplastic fragments.

Given the durability and convenience of plastic, it is easy to see why it has become the go-to material for use in everyday life. However, the heartbreaking truth is that this material is slowly suffocating our oceans, as 8.8 million tons of it make their way into the oceans every year. Approximately 270,000 tons of plastic debris are located on the surface of our oceans alone, placing around 700 marine species at risk of extinction. There could be more plastic than fish in the oceans by the year 2050! If we don’t figure out how to ditch our obsession with convenience, it could end up threatening our continued existence on this planet.

However, the good news is that many are beginning to understand what’s at stake, and are taking actions to curb the plastic crisis before it’s too late. The people below have come up with some incredibly innovative ways to use plastic in a productive manner, instead of simply allowing it to go to the landfill! 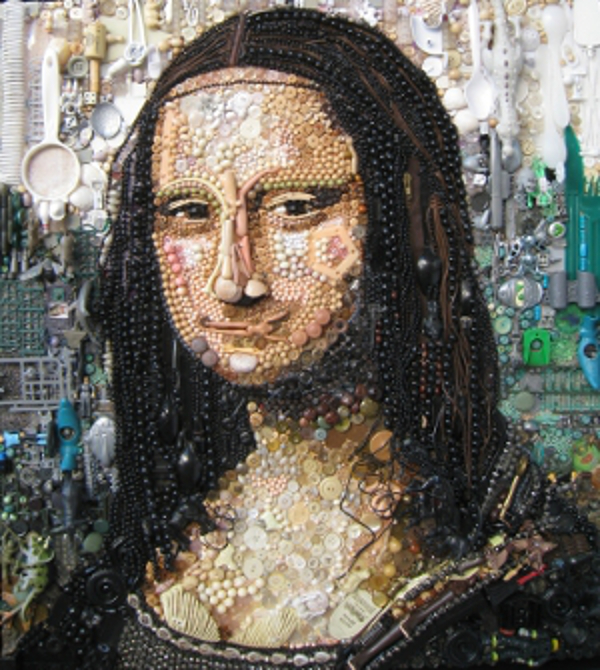 UK-based artist Jane Perkins has become well-known for her practice of taking discarded pieces of plastic and turning them into objects of beauty. She decided to do this after becoming “shocked by the ready availability of mountains of unwanted toys and other goods in our throw-away Western society.” She describes herself as “an artist of found materials” and has even used plastic trash to recreate timeless classics such as the Mona Lisa, above! Further samples of her work can be found here. 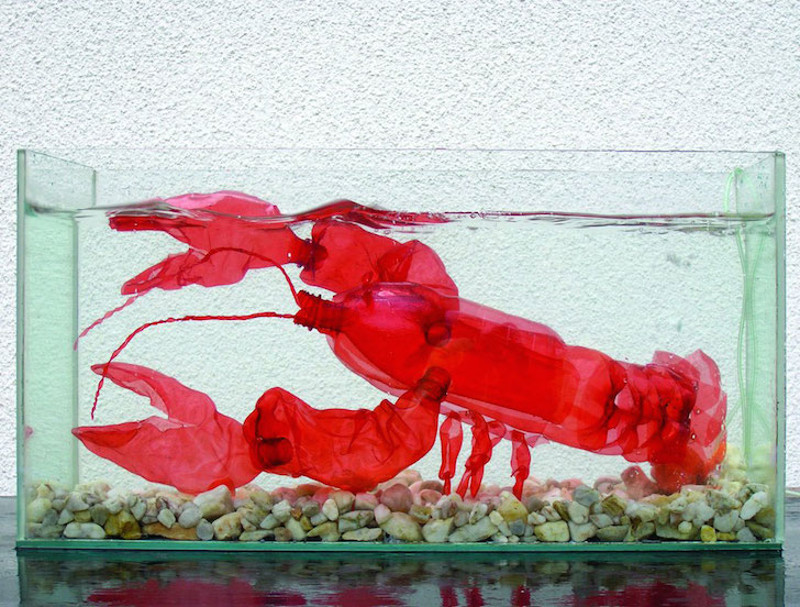 Another artist who was inspired to use discarded plastic in her work is Veronika Richterová. Richterová was inspired to use plastic bottles as an artistic material after learning that they could be deformed by heat and easily molded into new shapes. She has now created an entire series of sculptures, collectively known as PET-ART, that only uses plastic bottles. When she started the project, Richterová initially “took it only as one of my visual experimentations. I didn’t anticipate that plastic bottles would become such an obsession for me for many years. Since 2004 I have used thousands of bottles and have created hundreds of objects. In doing this work, I have developed many specific methods of technological processing.” Further examples of her work can be seen on her website. 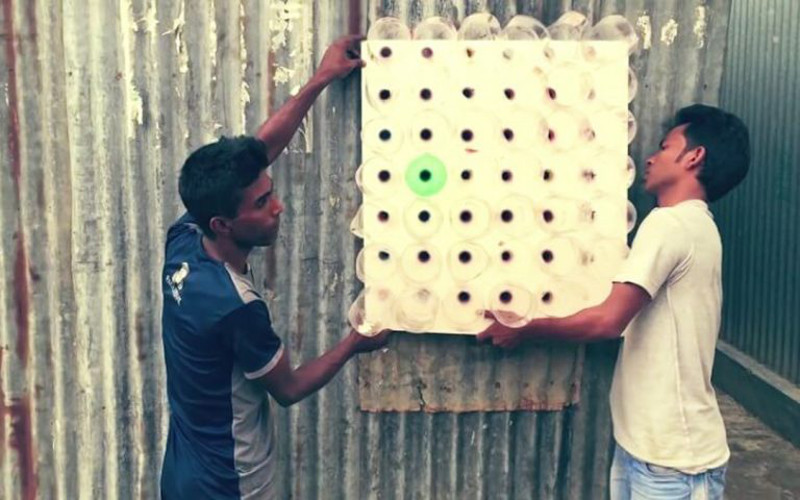 Last year, Bangladeshi inventor Ashis Paul managed to combine his passion for reducing plastic waste, while also helping residents of the hottest, most inhospitable regions of his country. An estimated 70 percent of Bangladesh’s population live in rural tin huts that can reach up to 45 degrees Celsius (approximately 113 degrees Fahrenheit) during the summer months, making life extremely difficult for residents. Paul, a creative supervisor with an advertising company called the Grey Group, came up with an easy and innovative solution: an electricity-free air conditioner made out of plastic bottles, known as the Eco Cooler. The creation of an Eco Cooler involves cutting old plastic bottles in half and placing them into a grid, which is fitted to a house window. The bottleneck end of the bottles is pointed inside the house. This changes the pressure of the air as it moves into the house, which helps to reduce the temperature inside the building. Last year, the Grey Group installed the system in 25,000 households across a wide range of villages across rural Bangladesh. 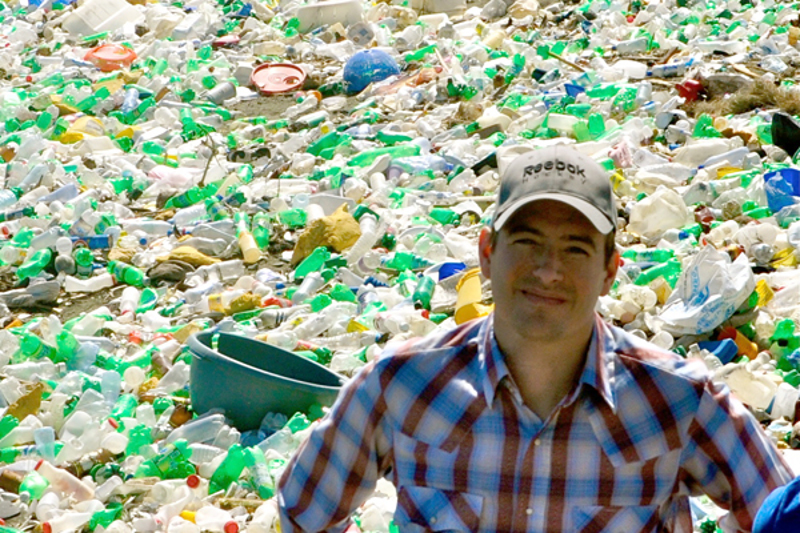 Ian Rosenberger is the CEO and founder of Thread International, a Pittsburgh-based company that is helping to repurpose discarded plastic, while also providing employment in Haiti, a country that has been plagued by poverty and an epidemic of plastic waste. Around nine million pounds of waste is generated in the city of Port-au-Prince per month, with discarded plastic bottles forming the majority of that figure. Following the 2010 earthquake in Haiti, Rosenberger traveled to the island, made friends with some local people, and began to consider how he might address the ongoing issues facing people there. Through the creation of Thread, he now supports 233 full- and part-time jobs in the collection of plastic waste in Haiti, and its subsequent conversion into a plastic fiber. That plastic fiber is then spun into a thread that can be used to make new clothes. Rosenberger believes that “business is the hope for ending the problems we face. Business can be a sustainable catalyst for positive change if you do it right.” 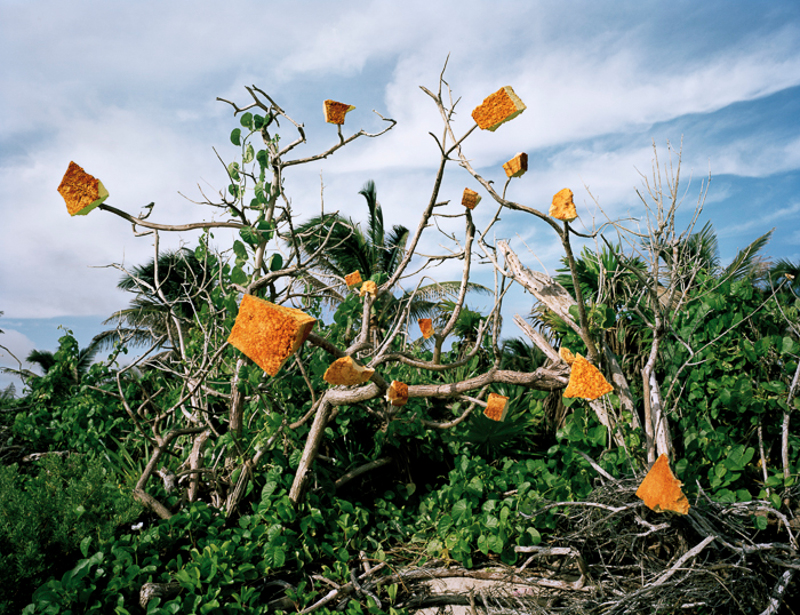 Artist Alejandro Durán uses discarded plastic in his work to help raise awareness of how our trash is gradually taking over the natural world in a process of “colonization by consumerism.” His stark installation and photography project, Washed Up, reveals just how acute the problem of plastic pollution has become on Mexico’s Caribbean coast. Durán has identified plastic waste from fifty-eight nations and territories on the beaches of Sian Ka’an, which is the country’s largest federally protected reserve and is also a UNESCO World Heritage site. “Washed Up” lays bare the reality of how this area is being overtaken by the world’s trash, through the use of installations composed entirely of plastic waste. Durán believes that “alchemy of ‘Washed Up’ lies not only in transforming a trashed landscape but in the project’s potential to raise awareness and change our relationship to consumption and waste.” His stunning work can be viewed here.

What Action Can You Take?

While these people have gone above and beyond the endeavors that most of us make in the fight against plastic waste, it is important not to discount the impact of our everyday efforts to reduce the amount of plastic we consume. Luckily, people all over the globe are becoming more and more conscious of the detrimental effects plastic waste can have on marine environments, and are beginning to take action to stop it. These actions can be witnessed everywhere, from strenuous beach cleanup efforts and striking visual campaigns to a growing advent of legislation against single-use plastics such as plastic bags and microbeads.

For more advice and information about how you can make a difference, check out the posts below.

You can also join One Green Planet’s #CrushPlastic campaign to learn more – just click on the graphic below!