Coffee? Tea? Hot chocolate? Most likely, you rely on at least one of these beverages to give you a boost during the wee morning hours. In fact, polls have shown that over half of all adults in the United States drink coffee daily. Unfortunately, this widespread habit is quickly taking a toll on the environment.

Paper Cups and the Planet

According to the Environmental Protection Agency, 1.3 million tons of waste from paper plates and cups are generated annually – and about half of this amount comes from paper cups. 58 billion paper cups are thrown away each year in the United States, with about 400 million cups being thrown away every day. In New York City alone, seven million cups are tossed into trash bins on a daily basis.

58 billion is a staggering number, but what does that really mean? Well, in every cup of coffee you see on a daily basis, there is an enormous amount of  intrinsic resources and energy that went into the production of that cup. In fact, those 58 billion cups roughly translate into 20 million trees, 12 billion gallons of water, and enough energy to power 54,000 homes for a year! 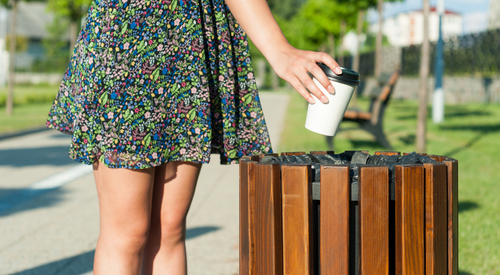 In fact, the annual consumption of coffee in the United States produces the same amount of greenhouse gas emissions as 4 four million cars. A person using just one cup per day generates almost 23 pounds of waste by the end of the year. And for what? The average cup is used only 10-15 minutes before being thrown out.

What’s worse, due to the inner polyethylene coating (used to prevent leakage), cups are expensive to recycle and will stay in landfills for over 500 years. So is that 15-minute experience really worth 500 years of waste?

Why Hasn’t Reusable Caught On?

Given the enormous environmental impact of the disposable coffee cup, why are customers so reluctant to bring reusable mugs to their favorite coffee shops? Many national chains like Starbucks, Peet’s, and Dunkin’ Donuts offer a small discount to those who bring in their own tumblers, yet less than two percent of coffee drinkers take advantage of this program. In contrast, approximately 35 percent of customers bring reusable bags when grocery shopping.

Possible reasons for this small percentage may include the inconvenience of carrying around a travel mug all day or the fact that most coffee shops offer a discount for reusable mugs, rather than a tax for using paper cups (which is often used for grocery bags). Behavioral economists have shown that a tax is a significantly more effective incentive than a discount, even when the amount of money involved is the same. In short, customers care more about avoiding a fee than capitalizing upon a savings opportunity. This is likely due to the fact that if they know they have to pay more they will think twice – but if they get a discount, it’s more like a bonus that they could do with or without.

What can we do to help reduce the impacts of paper cups on the environment?

If you’d like to learn more about the environmental impacts of disposable paper cups, check out the links below!

And if you’re looking to get your own reusable mug, check out: 26 Plastic-Free Essentials You Need in Your Life to Help Protect Marine Species and Our Oceans