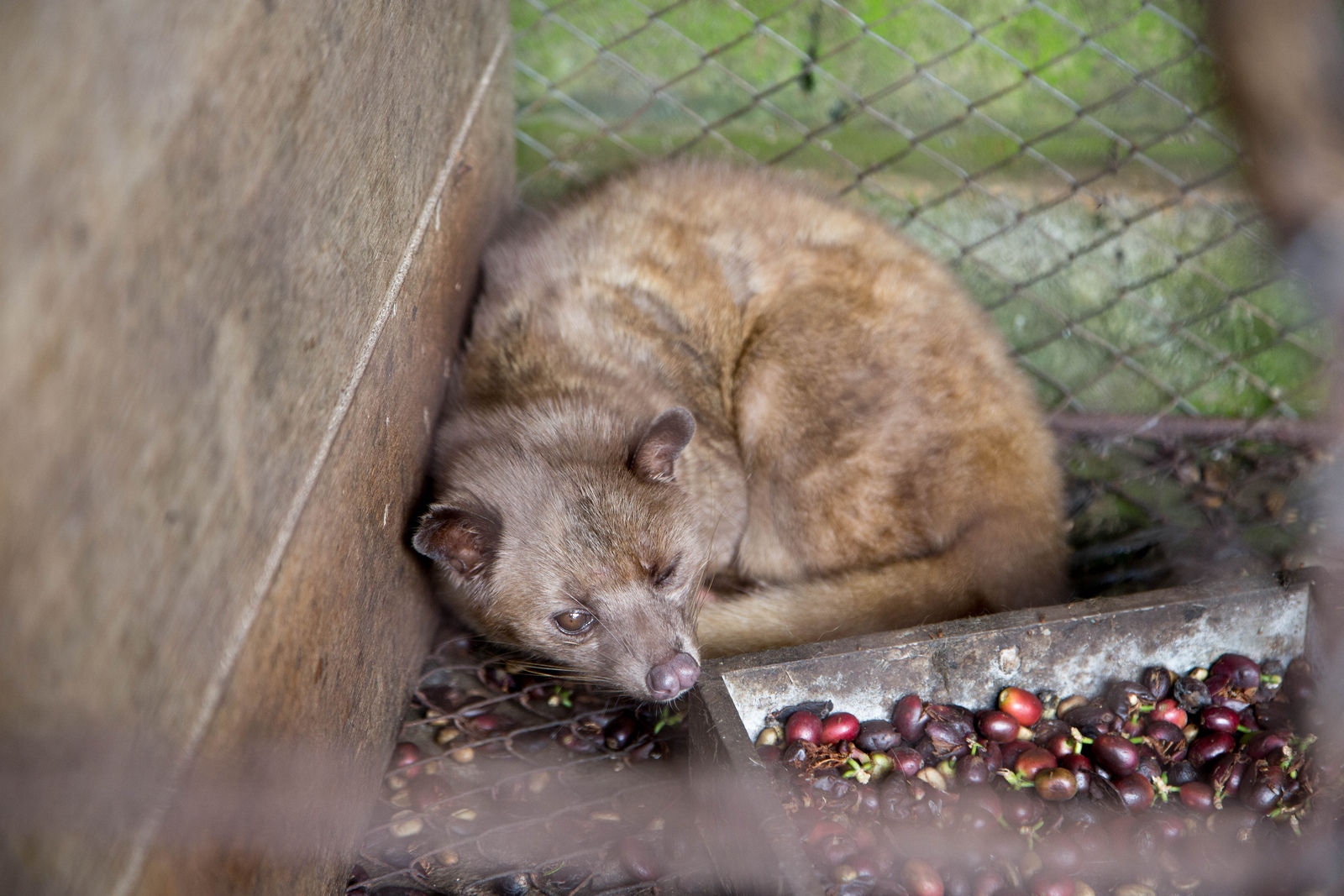 Civet coffee was first introduced to the west in 1991, by then coffee director of Taylors of Harrogate. He didn’t realize at the time what incredibly novel item civet coffee, or “Kopi Luwak,” would eventually become. Now, that unsuspecting explorer has made it his life’s mission to end the trade of civet coffee. This year, English luxury retailer Harrods ceased sales of kopi luwak sourced from caged civets. PETA also recently claimed a victory as coffee retailer, Kojava, officially agreed to end its sales of civet coffee. But, why? What’s the buzz about? Well, as seen in this video, the buzz certainly isn’t about caffeine. It’s about cruelty.

Asian Palm Civets are beautiful, wild, weasel-like animals that live in the tropical rainforests of Southeast Asia. They are often referred to as cats because they meow and their young are actually called kittens. Civets are nocturnal animals that hunt and forage for food from dusk till dawn. They are omnivores and enjoy a diverse diet of fruit, insects, and small animals. Solitary beings, they are territorial by nature and a single civet typically holds dominion over a whopping six and a half square miles of territory. Unfortunately for civets, part of their diet includes cherries from coffee trees. Unable to digest the beans, civets pass them whole, and that is where the novelty of civet coffee arises.

Civet coffee isn’t like your normal cup of Joe. Yes, it comes from beans, but only after being pooped by a civet. Apparently, something in the digestive enzymes of the animal gives the coffee a certain flavor. Mind you, the beans are plucked from the dung, along with anything else that the civet passes. (As far as we know, Civets, unlike unicorns, do not poop rainbows.)

Kopi luwak is expensive. Four ounces is about $50, and one pound is nearly $180. The reason why it is so expensive is that collecting wild civet droppings is a time sensitive and onerous task. Thus, only a small amount is gathered annually. The task of gathering civet dung requires a lot of effort because the gatherer must hunt for it. Once it is found, it must be fresh because otherwise the beans can develop fungus and become unusable. Kopi luwak is a delicacy because it is rare and only 500 kg is produced annually. Unfortunately, this couldn’t be further from the truth.

The kopi luwak market for wild cage-free civets only produces about 500 kg annually. However, the market is now industrialized. It is estimated that about 50 tons of civet poop is collected annually. According to one source, a single farm can produce 7,000 kg per annum from 240 caged civets.

Let’s do some quick math: If, 50 tons is equal to 1.6 million ounces, and every four ounces goes for approximately $50 (that’s $12.50 per ounce), multiply that by 1.6 million ounces and that’s $20 million per year! How can something rare also be mass-produced? There are no regulations in place that can officially distinguish kopi luwak from wild civet droppings verses wild caged civet droppings.

Civets are arboreal animals and they belong snoozing in the trees during the day, after foraging and hunting during the night. Captive civets are confined to battery cages, force-fed a diet of only coffee cherries and are unable to rest during the day. These territorial animals are stacked on top of one another inches apart, deprived of vitamins because of their strict diet and are in a perpetual state of distress, as seen in this video. It would be impossible to create a humane environment for caged wild civets. Firstly, they need over six square miles of territory; secondly, they’re nocturnal and typically sleep in trees; finally, they need to hunt and eat a diverse diet, and this can’t be done in a cage.

Cruelty is a buzz-kill and retailers are catching on. But, if that’s the case, then why is kopi luwak still being stocked on shelves in the west and sold internationally through online retailers? In a word, consumers. Unfortunately, the stigma of drinking a blinged out coffee, regardless of its cruel and unusually unclean beginnings, is high. It is the fecal consumer that will eventually kill the civet cat. If the facts of the matter can’t sway the ignorant consumer, then, let them drink scat.