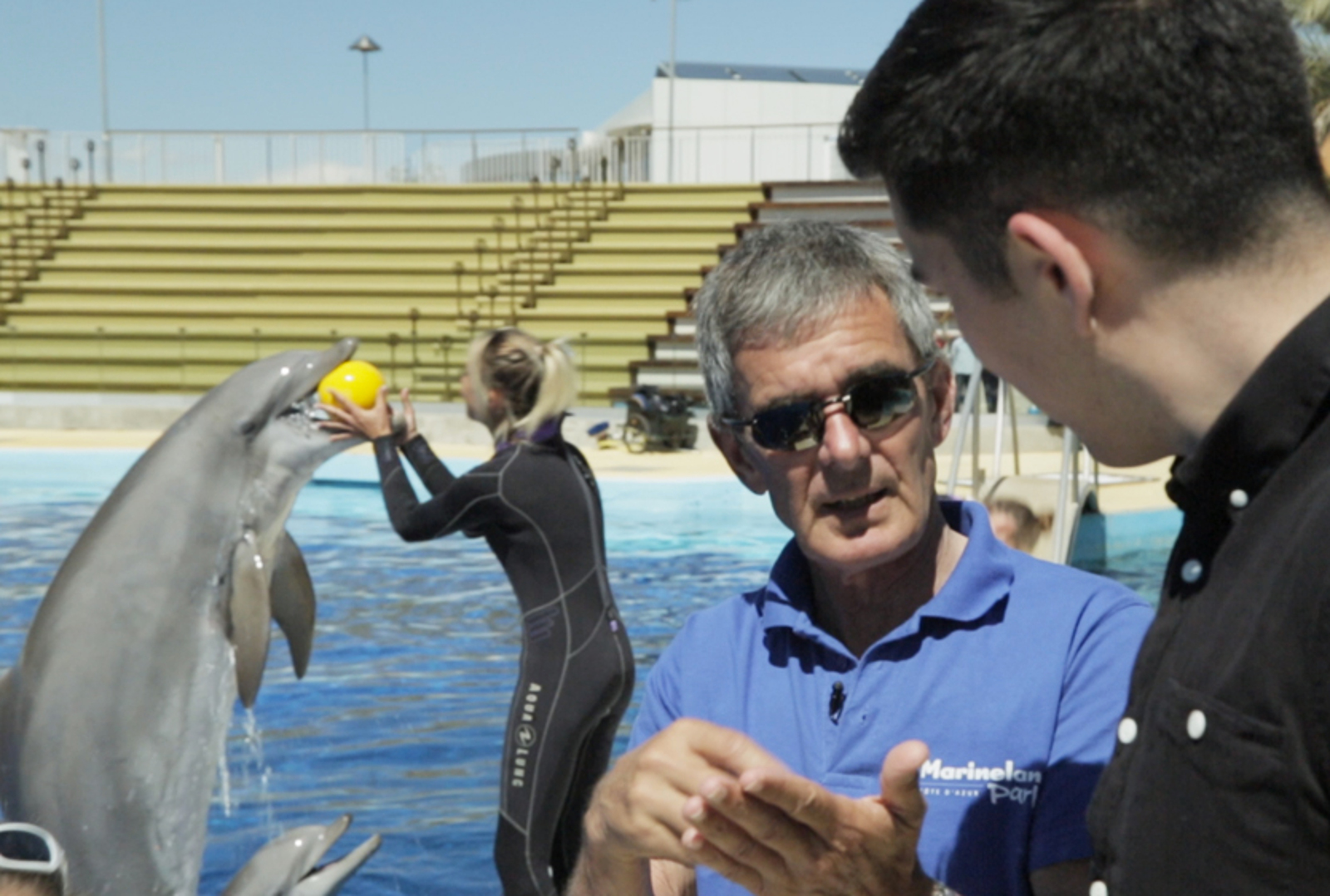 Two years ago almost to the day of writing this article, Freya the orca died at Marineland Antibes, France. It was reported that her death followed a long, unidentified illness. She was only 32 years old, barely surpassing the halfway mark for average female longevity in wild orcas. Just four months later her son died too when the orca tanks at Marineland Antibes were flooded and inundated with mud. Valentin himself was ten years shy of the average life expectancy for male orcas in the wild.

His death, attributed to a twisted intestine, hasn’t ever been clearly explained by the park, but as veterinary pathologist James Barnett described, “Excessive movement of the gut will lead to a twist. It may be initiated by dietary factors, unusual movements (such as rolling), and stress may be a factor too.” Barnett did add that “It seems to occur spontaneously and can be very difficult to understand why it has happened.”

The flooding garnered worldwide attention, transforming small conversations about dolphin captivity at the French facility into international discussions. Prior to this, relatively few people appeared aware that orcas (and bottlenose dolphins) were even held there in captivity. It’s only a stone’s throw, these days with multiple flights a day, from the United Kingdom, where cetaceans (whales, dolphins, and porpoises) haven’t been displayed in captivity for more than two decades.

It was partly for this reason that Jonny Meah, a British producer, and presenter, decided to film his new documentary, ‘Inside the Tanks,’ at Marineland Antibes. His intention went beyond drawing attention to the existence of this European marine entertainment park and its practices; he wanted to enrich the debate surrounding cetacean captivity.

“I am hoping to break down barriers and open a dialogue between those with different opinions on the subject,” Meah told One Green Planet in an interview. “I would encourage all sides to watch it and join the discussion.”

The documentary hears from a range of professionals from both sides of the fence, including orca expert and founder of the Orca Research Trust, Dr. Ingrid Visser, former Marineland Antibes orca trainer, John Hargrove and the Zoological Director of Marineland Antibes, Jon Kershaw. Not only does Meah introduce his audience to the park itself and the animals kept there, he also explores the different perspectives of these individuals who have worked with orcas and other dolphin species both in the wild and in captivity. 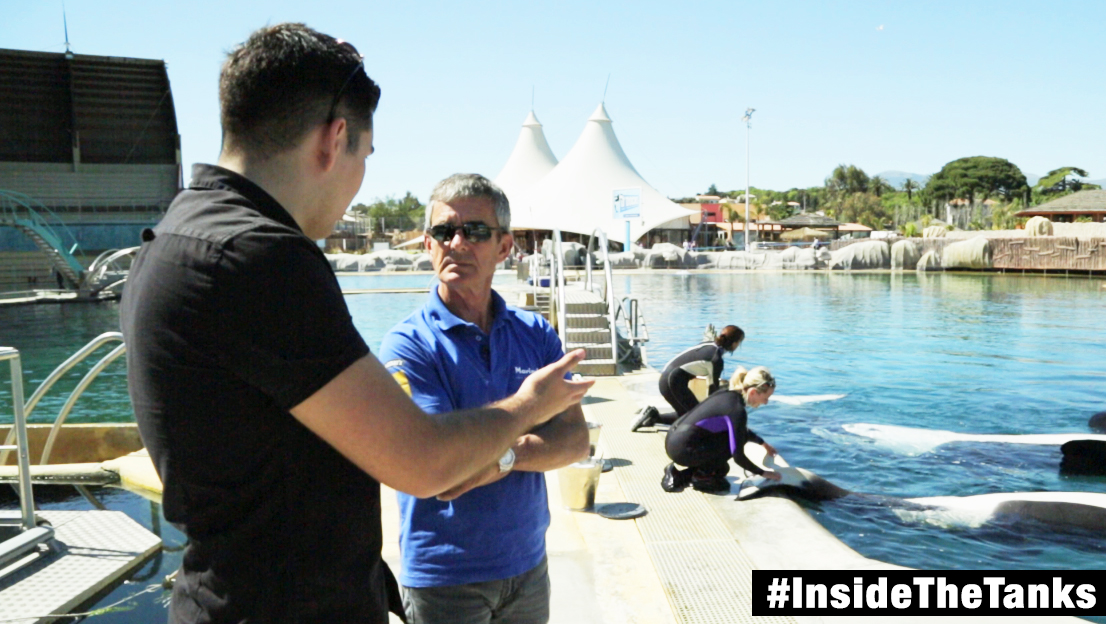 “I’m excited to see this documentary,” Visser has expressed, stating that, “It will be good to hear from the industry as they so often remain silent on this very important topic.” This was evident with SeaWorld refusing to participate in the ‘Blackfish’ documentary, which tells the story of now-deceased, wild-born Icelandic orca Tilikum. Loro Parque in Spain also refused to be interviewed for the same documentary regarding the death of a trainer by one of the orca held at their facility.

During ‘Inside the Tanks,’ Meah spends time with Visser who was at the park collecting data on the welfare of the orcas and bottlenose dolphins. He explores the behavioral and physical measures of welfare that Visser recorded in the animals, which indicate the orcas and bottlenose dolphins of Marineland Antibes are experiencing poor health and a reduced quality of life. 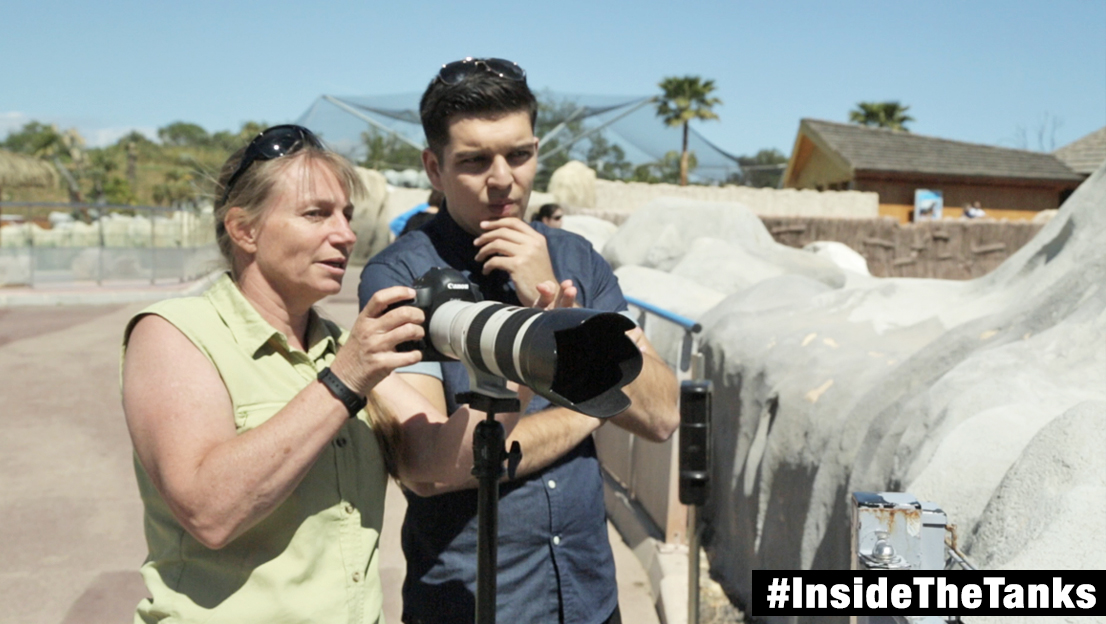 “Sadly, it actually doesn’t matter which of these facilities you visit around the world, the animals all exhibit signs that they are not thriving in captivity.  These signs include injuries and abnormal behaviors, both of which were prevalent at Marineland.”

My Experience at Marineland Antibes

Visser’s observations aligned with my own. When I visited Marineland Antibes, I witnessed several abnormal repetitive (stereotypic) behaviors displayed by the orcas, including listless floating, swim patterning and head banging. I saw aggression between individuals, (with Inouk usually on the receiving end), as well as evidence of extreme tooth wear, (again, particularly in Inouk). This dental damage occurs in captivity when the animals chew on the concrete walls and metal gates in their tanks. This is also a stereotypic behavior, one that can result in self-mutilation. These behaviors and subsequent physical trauma are born out of the animals’ frustrated needs. 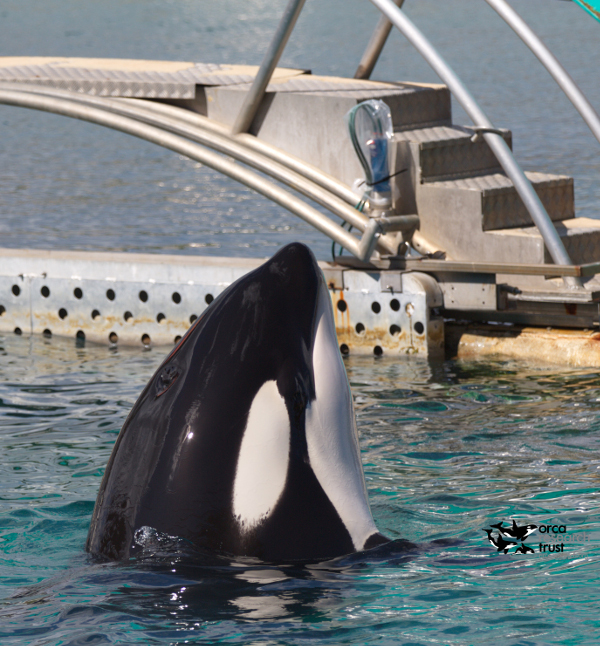 When I walked into Marineland Antibes in France for the first time several years ago, I knew they had one wild-born orca among the five they displayed. I picked Freya, who was born in the waters off Iceland, out the moment I saw her. She had something that the other whales didn’t have: Purpose in her movements and curiosity in her eyes. She didn’t seem robotic like most of the other orcas in her tank. Moana was the only one to share just a bit of Freya’s “spark.” As a young calf then, he had only experienced a few months of captivity since his birth at the park. 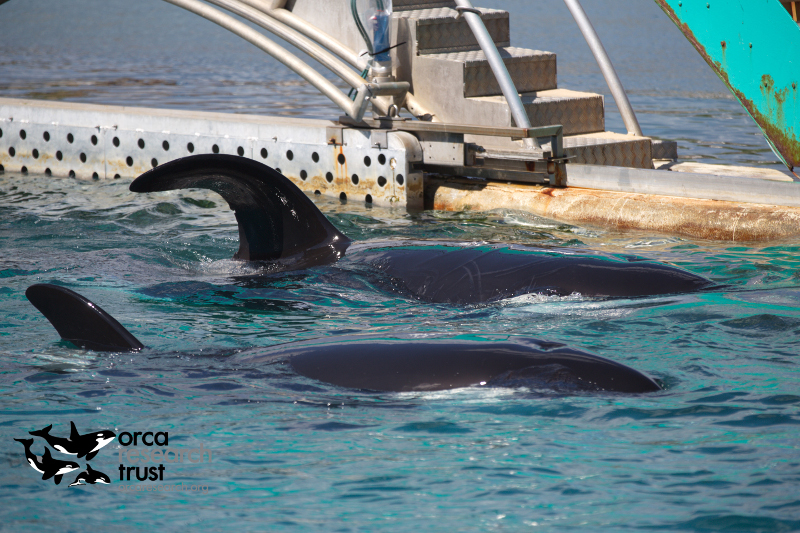 Valentin, Freya’s son, looked like the archetypal male, with huge pectoral fins and a tall dorsal that was starting to collapse in the captive environment, even though he was only 15 years old. His half-sister and mother of Moana, Wikie, was the second female in the tanks. They were on display with Wikie’s brother and Moana’s uncle Inouk. Inouk was bottom of the group’s social ladder at that time and his treatment by the other orcas reflected his low ranking. Only Moana tended to seek him out and spend time with the otherwise isolated whale.

The bottlenose dolphins were kept in similar conditions, continuously being moved between tanks at different ends of the park, dependent on whether they were being used in entertainment shows or public interaction programs.

If there was one word to describe these animals, they came across as, for all intents and purposes, bored.

As seen in the documentary, Kershaw (at least for the most part) agrees that orcas and bottlenose dolphins perform behaviors in captivity that are unnatural. Kershaw also admitted that he is “sure” inbreeding of the orcas has occurred at Marineland Antibes. Keijo, Moana’s younger brother, is the offspring of Wikie and her half-brother Valentin. It’s possible that Moana may be as well, although officially he was conceived through artificial insemination with sperm collected from a SeaWorld orca.

That the U.S. marine entertainment giant has now banned the breeding of its orcas (along with those on loan to Loro Parque in Spain), and given that Marineland Antibes’ own captive orcas are all related, this has left the French park in a difficult position regarding any expansion plans for its captive population. However, in an astoundingly forward-thinking move, France recently announced that it is banning the breeding of all captive cetaceans in a decree that applies to the entire country, (and which Marineland Antibes is attempting to appeal).

Such bans don’t just end at the company or country level, they are having ripple effects around the rest of the world, inspiring countries like St. Lucia to express second thoughts about dolphin captivity.

While, for now at least, there appears to remain a schism between the industry and those advocating for an end to the captivity franchise, Meah is hopeful that ‘Inside the Tanks’ will help to bridge the divide. “The biggest insight this documentary has given me,” Meah explained, “is that while there are many differences in attitudes, both sides also have a common factor: They want the best for the animals.” He thinks it would be “fantastic to see full cooperation between marine parks, marine biologists, and organizations to find the best solutions for the animals.” 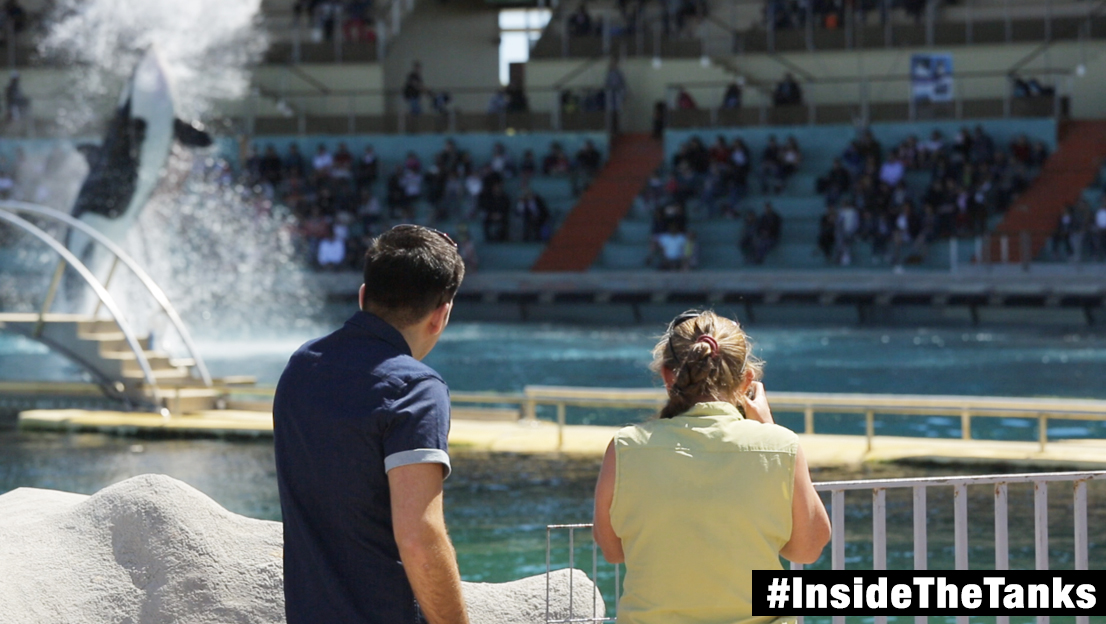 Visser shares Meah’s sentiments too but emphasizes that full transparency will be required to make it happen. “Given the recent ban in France,” Visser wants to know if “perhaps now the industry will tell the truth about the medical history of its animals?”  She goes on to say that, “Through court cases, we get glimpses of what goes on behind the scenes and it isn’t pretty.  If the industry would just be honest it would help us all move forward to providing better protection for the animals.”

In the short time since the documentary was released, it has already reaped a lot of attention on its social media sites, with tens of thousands of views and hundreds of comments. But as the most recent in a long line of orcas in captivity at Marineland Antibes, what changes will Inouk, Wikie, Moana and Keijo see?

Visser hopes that the French decree will be the next step forward for the captivity industry.  She said, “Honestly, can you imagine what an improvement it would be for those animals to have a home in a seaside sanctuary? There, they would still be looked after and still be fed, but they would have room to swim and dive and feel the rhythm of the ocean. Before, they would have been performing in circus-like shows, but in a sanctuary, they could be given the chance to retire and live the rest of their lives in dignity and peace.”

Watch ‘Inside the Tanks’ now and join in the discussion. You can also help to raise awareness about the plight of the animals at Marineland Antibes by sharing Twitter posts from Tilikum&Co.’s Marineland d’Antibes Tweet Sheet – it only takes two clicks!