India’s Amer Fort: How Elephants Are Exploited For Tourist Rides 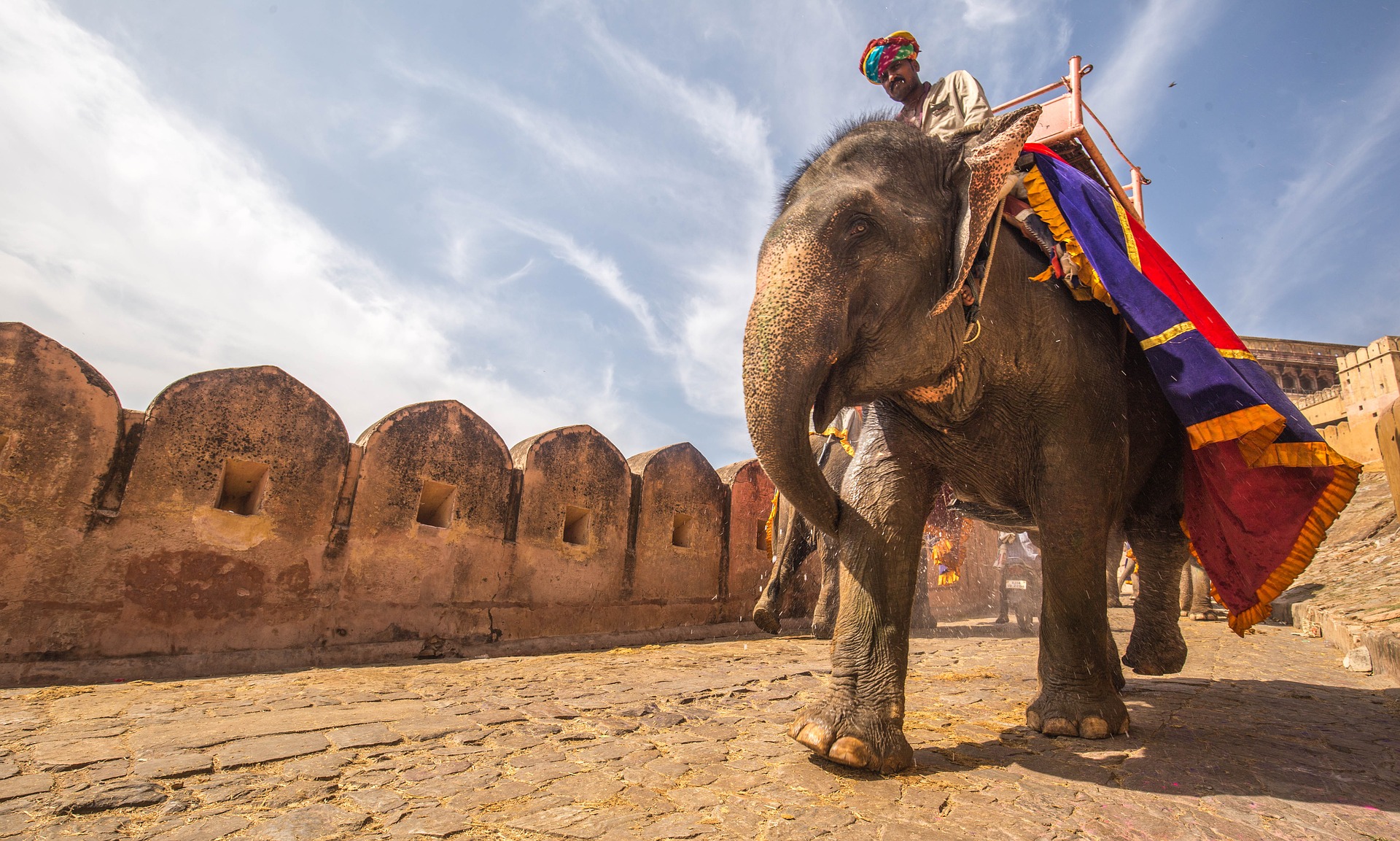 Imagine walking on hot concrete, up and down steep slopes, hungry and thirsty in scorching heat. Now add a humongous 300 kg weight on your back and tourists crowding you from every angle possible. This is the life of a captive elephant at Amer Fort located in Amer, Jaipur.

Jaipur is a historical, flamboyant city in India which is home to beautiful forts, museums and gardens. Amer Fort is one of the most visited forts in India, located high on a hill, known for its artistic style components. Made from sandstone and marble, Amer Fort flaunts a series of four colossal courtyards, palaces, halls, and gardens. The fort was build in 1592 by a Rajput ruler, Raja Man Singh and is a prime tourist spot that attracts a massive number of visitors every year due to its impeccable grandeur and unfortunately, the elephant rides.

Nine out of ten tourists have elephant rides on the top of their bucket list, but do they know the cruelty involved in making their elephant ride possible?

These captive elephants weren’t born in captivity, they were snatched from their mothers in the wild as calves by poachers and were trained under a cruel process called Phajaan, which means “breaking of the spirit,” The innocent calf, who is still yearning for its mother, is kept in a small trap with no space to move. The young elephant is forced into further claustrophobic conditions by having all four of its legs tied, making it impossible for the young elephant to move. As a result, it is forced to stand in its own feces for days.

Starved and beaten day and night, the elephant will become submissive, only to know two emotions: pain and fear. Sometimes the trainer’s cruelty seems to have no bounds, and they chain the elephant’s neck with spikes. Even after this, if the calf is still not under control, whenever the elephant moves, these spikes dig in to its flesh and cause the animal to wail in pain. With no access to enough food, fresh water or proper veterinary care, these elephants are in immense pain and forced into a lifetime of misery and loneliness. 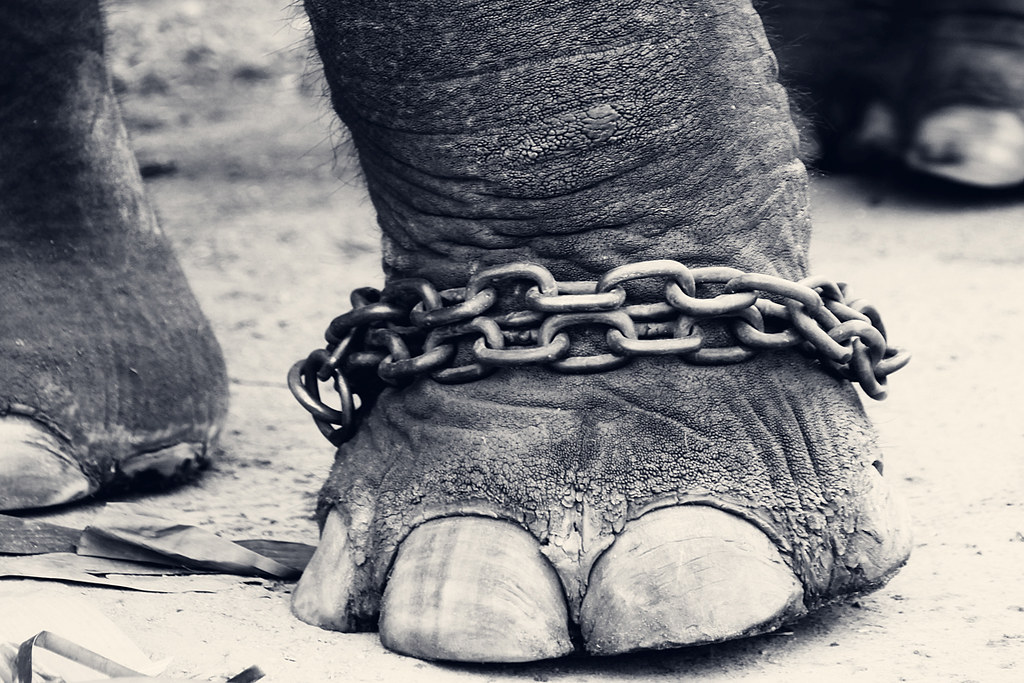 Before they begin the gruesome riding routine each morning, these elephants are heavily decorated and painted to hide their bruises and fresh wounds. Each mahout, or elephant handler, sits on the elephant with a heavy howdah — the shiny seat that can hold two tourists. The howdah along with safety gears and one mahout collectively weighs about 200 kgs. Elephants as a species are not designed to carry such heavy loads on their back. You will never witness a mahout without a wooden stick because they mercilessly beat the elephant whenever they want.

Elephants exploited by the tourist trade have multiple swellings on different parts of their body which could be abscesses resulting from being forced to lie on concrete floors or even cancerous growths. The painful wounds that typically appear on their hind legs are the result of constant tethering with chains or abrasive ropes. Sometimes, to control the elephant, mahouts use an iron ankush to poke and induce pain which causes deep wounds on the elephant’s forehead. A lot of these elephants display stereotypic behavior, the act of swaying and head-bobbing which indicates stress and extreme deterioration.

There are currently 103 elephants being held captive in abusive environments in Amer Fort, and despite their chronic health issues they are still being forced to give rides. According to a report by the Animal Welfare Board of India, out of these 103 captive elephants, 19 are blind, either unilaterally (right or left eye) or bilaterally (both eyes), leaving them unfit for any work. Additionally, 10 of these elephants suffer from tuberculosis and all of them suffer from numerous foot problems like overgrown toenails with cracks, deformation, discoloration, overgrown cuticles, and dry and bruised footpads. Carrying heavy loads up and down steep hills in India’s extreme heat also causes irreversible deformities in the elephants’ backs. Adding to their misery, after giving rides at Amer Fort, these elephants must walk back to the Elephant Village which is five to six kilometres away. They walk amidst blaring horns and heavy traffic with the heavy howdas on their back. The safety of the elephants is at high risk and yet they are still being used to perform this inhumane act every day.

By using these wild animals to perform for mere entertainment, the tourism industry is not just tormenting the elephants but is also putting public safety at risk. Elephants are wild animals and under immense stress can retaliate by injuring or even killing people. In 2005, two tourists in Jaipur were injured and their tour guide killed by an elephant when they were trying to take a picture with it. There have also been other cases in which tourists have been injured after the elephants they were riding run amuck or throw the tourists from their back. In addition, elephants in captivity are carriers of many contagious diseases, including tuberculosis, which can be easily passed on to any human around them.

Inform your travel guide well in advance about your preferences about elephant rides and educate your friends and family about this issue. It is always helpful if you can post your personal review about such unethical experiences on Trip Advisor. This will really help other tourists to stay aware about animals being used for mere entertainment purposes. If there are no tourists to visit, these places will automatically shut down!

Here are some reviews from witnesses explaining how badly these elephants are whipped, abused and exhausted everyday of their life.

1. Ariel says, “Do you know the guides whip the elephant’s head when tourists are riding them up to the fort? I saw it happen today multiple times when I was at the fort and can’t believe tourists are still riding elephants. Ridiculous and unnecessary. I would never do this and I hope this review makes you think twice too.”

2. Gabby says, “Just want to clarify that the fort itself is 5 stars all the way! It is absolutely stunning and my favorite attraction in Jaipur. The reason I am giving it 1 star is because of the unethical treatment of the elephants. The walk up to the fort is not strenuous in any way and there is no reason any tourist should be riding them. We saw elephants being hit ferociously with sticks, we noticed all of the elephants had their tusks cut off, and they were strapped with all this equipment on their back which hurts the elephants. There are other places in India that you can ride elephants that treat them properly, just not here! Be responsible and just walk up to the fort instead.”

3. Another witness says, “Please don’t ride the elephants up to the fort. I know they look splendid and very colourful, but they do suffer from carrying people. Their feet get sore on the hard ground, their necks and spines suffer fractures and they become exhausted. Please walk up and admire them from a distance.”

Please speak up for these abused elephants — they need you. If you love elephants, don’t ever ride them!

Sign this petition and support Wildlife SOS’s campaign to Refuse to Ride an elephant.