In Awe of the Wren: One of Nature’s Many Miracles 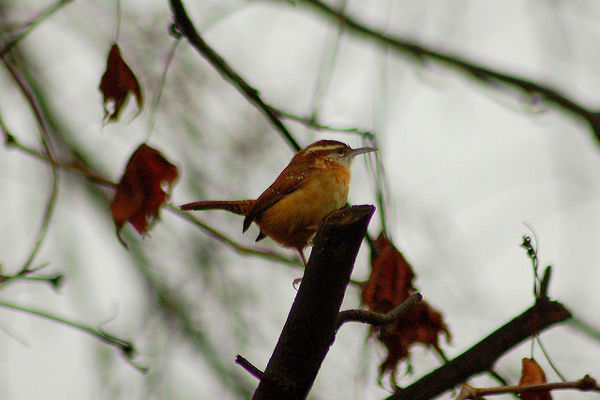 I am not much one for miracles. I’m not religious or superstitious, and my interpretation of what we call “supernatural” is that it is something perfectly natural that we just don’t have the tools or wisdom to explain. And I don’t gaze at the night sky and wonder: Are we alone? What a sad thought that is! Sad because we are so richly companioned by other beings right here on Earth. How could I ever feel lonely in a cosmic sense when I can open the window to hear robins singing or look into the woods out back to see a pair of young squirrels practicing their leaps from one walnut trunk to another?

If anything comes close to miraculous for me, it is the makings of what is surely the grandest process in the universe: biological evolution. This process of winnowing and refinement over eons of time has produced a seemingly boundless bounty of diversity and ingenuity. Evolution by natural selection is a problem-solver bar none. Because they are survivors, evolution’s winners—the organisms we see every day in our midst—are exceptionally efficient at what they do.

This spring I have had the fortune of observing up close two glittering victors in the pantheon of life—a pair of  Carolina wrens. Carolina wrens are small, brave, loud birds of the Eastern United States and northernCentral America. They are fairly large as wrens go, yet they weigh less than an ounce. 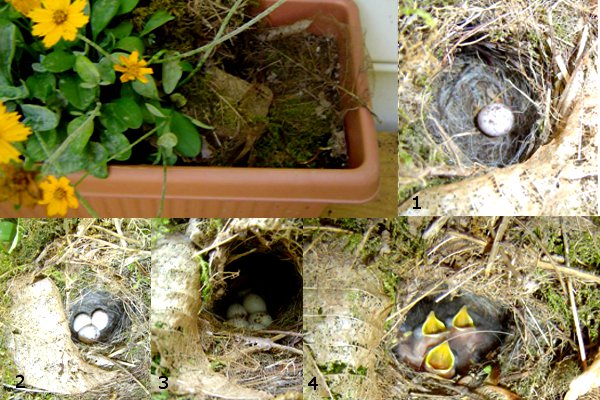 I first discovered one of the wrens entering a cavity in one of the rectangular flower pots (see first photo) that sits on the handrail of a corner of my deck that adjoins the house. It’s fairly secluded there with overhanging soffits fifteen feet above. When this bird left I went over and discovered a nest excavated into the moss and earth. I put my fingers inside. It was smooth, lined with dried moss and leaf skeletons, and it felt perfectly spherical.

The next day I discovered a speckled egg in the nest (photo 2). Two days later there were three eggs nest (photo 3). By day five there were—you guessed it—five eggs nest (photo 4). A hungry blue jay might see these eggs as a tasty meal; for me it was like discovering a little box of treasure at the end of a cave (maybe that’s how the jay would feel, too!).

I immediately stopped putting out morning peanuts for the jays, who I enjoy watching swoop down to snatch them up. Over the ensuing two weeks I have watched the wrens going in and out of the nest. They will let me quietly peak at the opening from a few feet away. Last week I overstepped my bounds by holding my camera at arm’s length and taking a photograph. The flash spooked the nesting bird, who shot out in an explosion of feathers. But she soon returned, determined to make good on her huge investment.

Now there are five hungry chicks to feed. They are helpless little things, but they know what to do. They crane their necks and open their bright orange beaks, glistening with saliva, whenever mom or dad comes calling. Raspy spiders and hairy flies (facilitated no doubt by my very productive compost pile just beneath the deck) are poked into the slippery gullets so that tiny stomachs can process them into wren growth.

I can’t help being awed by nature’s wondrous workings. How did the eggs survive the torrential rains that left the flower pot soggy and dripping? How do the parents know how to provision all five chicks evenly when only one can be fed on a single visit? How did the eggs hatch nearly synchronously when it took five days to lay them? How does a bird weighing the equivalent of eight US pennies produce five eggs in as many days? How on earth do the wrens feed five voracious chicks, themselves, clean house (chicks poop often), and avoid predators (one hopes!)? How will the chicks go from being crammed in a tiny vessel for two weeks to flying in the open air? How will they learn to feed themselves?