Hundreds of Cats Rescued From Cat Meat Trade in China 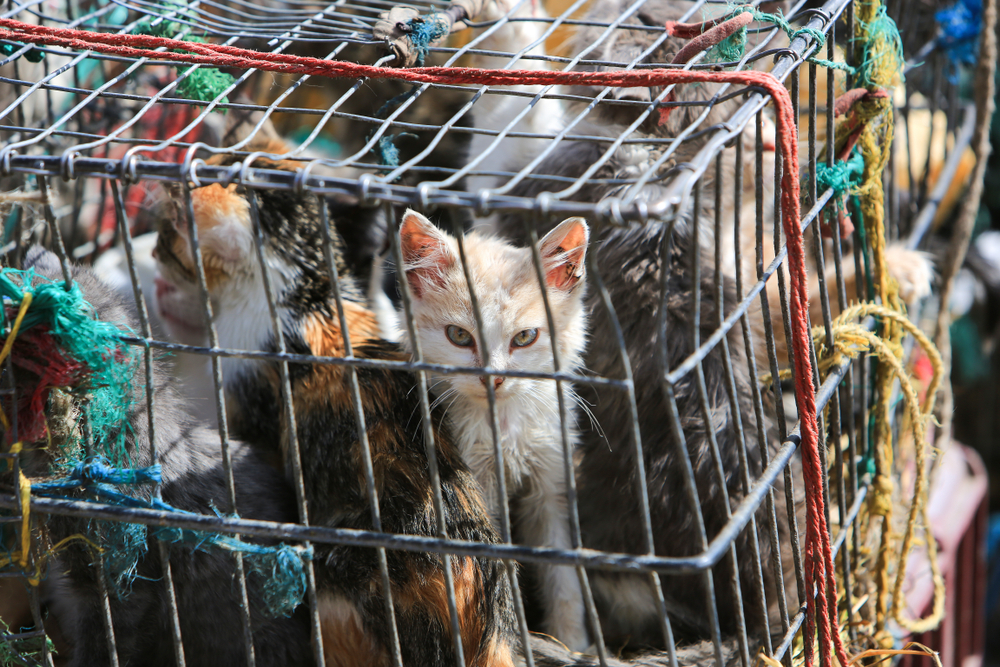 The dog meat trade is notorious. Every year around the time of the Yulin Festival, the average person is aware again of the fact that this industry exists. But the animal activists work hard all year long to end the dog meat trade. It’s not just during the time of that festival and it’s not just in China. It’s an ongoing problem. There’s the Boknal dog meat festival in South Korea, as well as dog meat industries in Nigeria, the Philippines, Latin America, and more. But what receives even less attention is the equally horrific cat meat trade.

According to Stop Dog and Cat Meat Trade Worldwide, cat meat is eaten in Cameroon, the Guangdong and Guangxi provinces in China, some parts of Latin America, and it’s even legal to kill cats for food in 44 states in the United States. Like the dog meat trade, the cats used for the cat meat industry are often stolen family pets, the slaughter and preparation are often unregulated, and consumption of the meat is linked to infection and other diseases.

It’s important to think critically. This may seem bizarre to someone in a country like the United States where dogs and cats are thought of as companions and not food sources. But other animals are eaten here and just like that’s deemed normal, so is dog and cat meat in many cultures. This is just something to remember before being too harsh or critical, and especially before pointing the finger at specific cultures or regions of the world. However, just because it’s tradition does not make it right or acceptable. Extreme cruelty is always wrong.

Recently, police in China seized a truck with 307 live cats that were headed to unregulated restaurants. The animals were sent to Small Animal Protection Association where they were housed, treated, and inoculated. Unfortunately, 32 cats died during transport, but 275 cats were saved.

Many of the cats were severely dehydrated or diseased which indicates they were going to be sold without having being quarantined. This means not only were these cats going to be cruelly slaughtered, but the people selling their meat were posing a huge risk to the public health.

They were also crammed into such tight quarters that they are now in a permanent state of fear. But many have been permanently rehomed and many are being fostered, so their rescue was a huge victory! Thankfully, the police and organization acted quickly to rescue the poor cats. Head to The Daily Mail to see photos of the cats!

To call for an end to the dog and cat meat trades, sign this petition!