How You Can Help Animals Affected by Hurricane Dorian 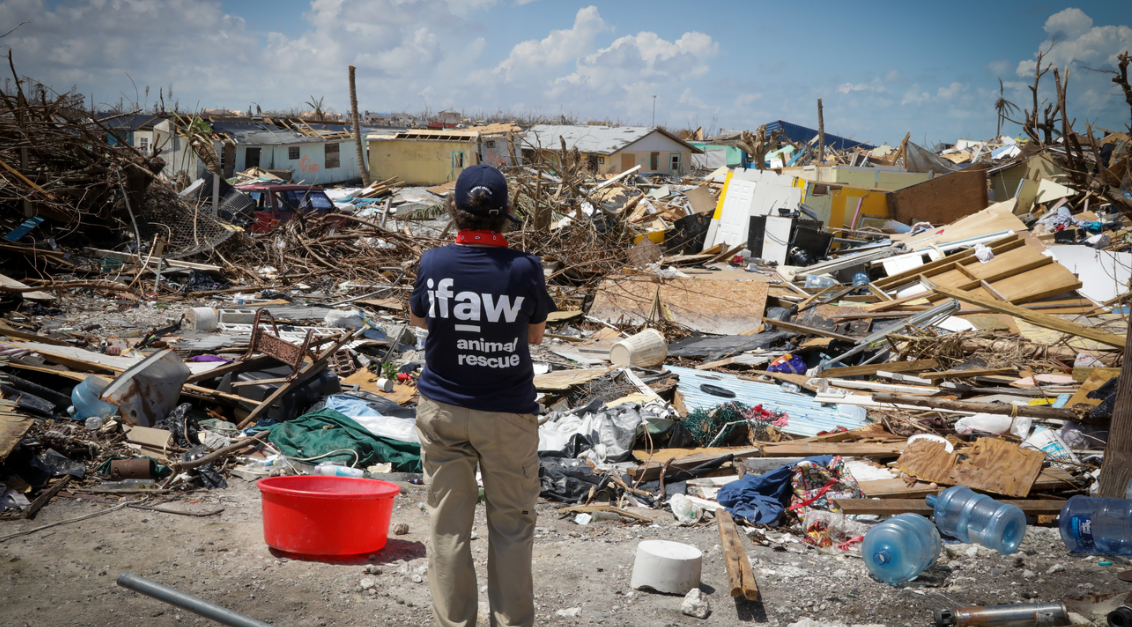 It is no secret the immense destruction caused to the Bahamas on Sunday, September 1st as a result of Hurricane Dorian, a Category 5 storm which ravaged the island for approximately 36 hours. Damage to homes and structures was vast and relentless, with up to 185mph winds devastating communities and leaving hundreds of animals in need of rescue. In response to the animal welfare situation resulting from the storm, the International Fund for Animal Welfare (IFAW) deployed a team to the Bahamas to carry out animal relief efforts. At the invitation of the newly founded Dorian Animal Relief coalition known as ‘DAR,’ and approved by the Bahamian government, the organization is helping lead the international animal rescue effort by providing rapid assessment and life-saving rescue operations assistance to shelter animals in need.

According to Katie Moore, IFAW’s Deputy Vice President of Animal Rescue, “IFAW teams deploy all over the world responding to all types of disasters. We know that animals are part of communities impacted by disasters and for those communities to heal and return to normalcy, animal needs and issues must be addressed.”

Alongside key local partners, field teams have focused on the hardest-hit areas of Abaco and Grand Bahama, where over 1,000 residents of the area evacuated the island with no option to bring their pets with them. To effectively deal with the situation, IFAW established a MASH unit, or Mobile Army Surgical Hospital, where rescued animals can receive urgent veterinary treatment and shelter. Complementing this was a Dispatch Center where search and rescue teams take calls from owners and organize rescue missions for pet and family reunifications.

The efforts do not end there however, as organizations are looking to achieve the long-term wellbeing of these animals as well. Thankfully, these animal survivors are one-step closer to finding their forever homes. Teaming up with organizations including GreaterGood.org and Wings of Rescue, transportation was organized off the island for the surviving animals from the Grand Bahama Humane Society whose shelter was destroyed by the storm. With funding from the Andrew Sabin Family Foundation, seventy-one dogs and eighty-six cats were transported via air from Freeport, Grand Bahama to Fort Lauderdale, Florida on the evening of September 12th. The dogs were taken to HALO Rescue in Sebastian, Florida, while the cats continued onwards to their final destination at St. Hubert’s Animal Welfare Center in Madison, New Jersey. After undergoing health assessments, the animals will soon be adopted into new homes.

Ensuring the welfare of its animals is indeed a critical component for a community to return to a sense of normalcy following any disaster. Community animals are an essential part of the family both culturally and emotionally and by reuniting families with their pets, hope can be given to the family as well as to the broader community as well.

Rescue and reunification continue to this day and will likely do so for the foreseeable future. The public is encouraged to email [email protected] to report a lost or found animal. They can also use WhatsApp text the Dorian Animal Relief hotline at 242-427-7729. To donate to IFAW’s effort to help animal survivors of Hurricane Dorian, they can do so online via the IFAW website