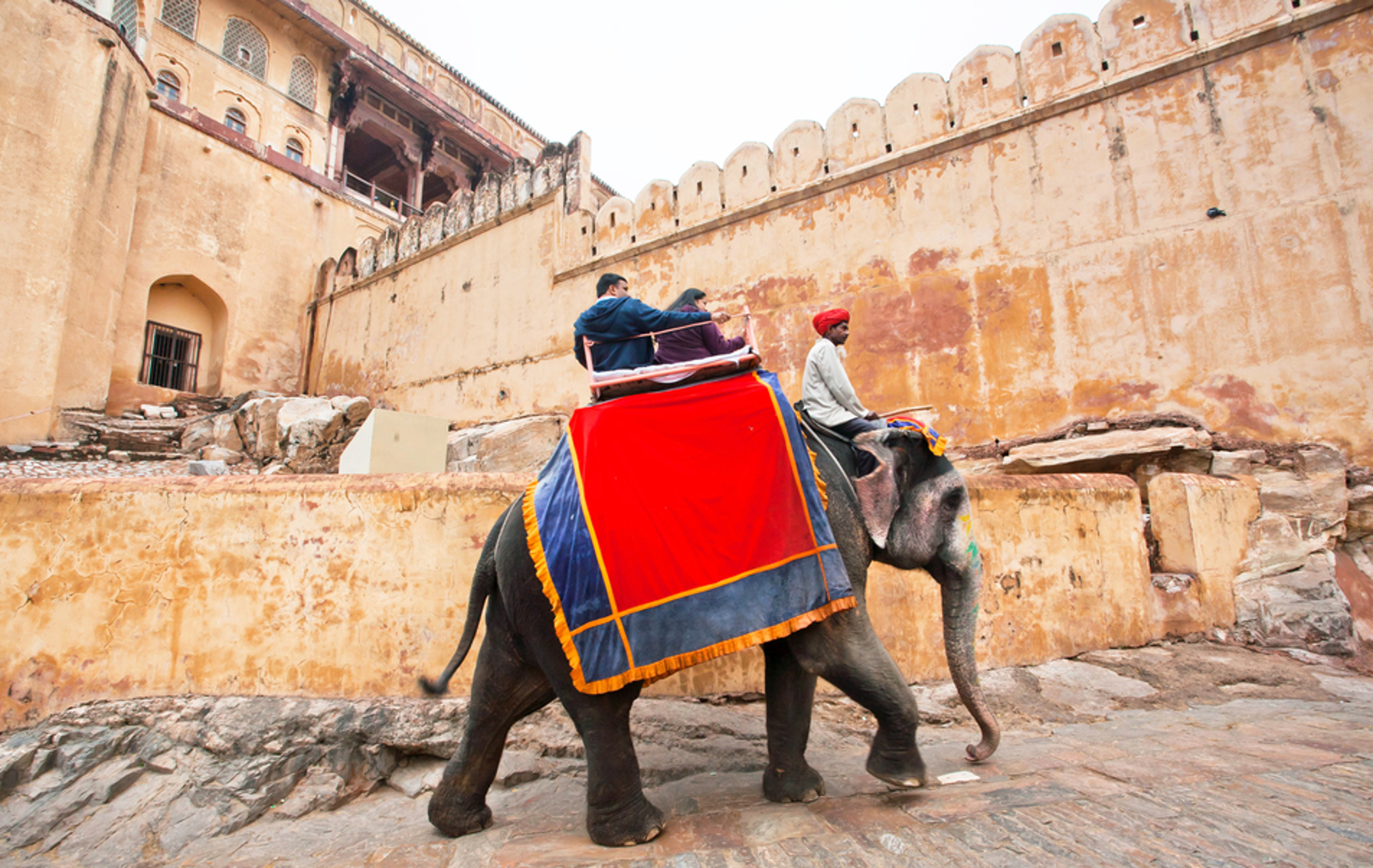 Among the varied offerings for tourists visiting Rajasthan, India, is the elephant ride at Amber Fort (known locally as Amer Fort). The experience promises a flavor of exotic India to tourists who jump at the chance to get close to one of these beautiful wild animals.

Unfortunately, the scale of the elephants’ abuse and the hidden suffering behind these rides is lost on many.

Captured from the wild, often as babies, these animals undergo a brutal training process called “the crush” whereby they are beaten and starved into submission by their handlers. They are next brought into these venues such as Amber Fort, to carry humans on their backs and become props in an entertainment display.

An Amber Fort elephant, with damaged feet from carrying tourists, kneels on a concrete floor

Studies have shown that the elephants at Amber Fort in Jaipur – numbering in excess of 100 – show multiple health problems including foot injuries, damaged eyes and general fatigue caused by their unnatural activity.

Food offered to them is often nutritionally inadequate, barely fueling them for the steep slope they are forced to climb. They are forced to walk over concrete surfaces which cause them pain and distress.

Cruelty is Not Entertainment

Bearing in mind this immense cruelty – that is often promoted by travel and tour operators – a petition has been filed to the Supreme Court of India to stop this suffering.  The petition has been led by Wildlife Rescue and Rehabilitation Centre (an NGO), in a bid to stop these elephant rides.

The elephant is India’s National Heritage Animal, but the way they are treated shows complete lack of concern for a wild animal that is extremely social, sentient and ranges over 12 miles in the wild every day.

We are working with travel companies to urge them to remove elephant rides and shows from their itineraries, and promote animal-friendly tourism. We are also looking into a sustainable solution for these elephants in Rajasthan, so that they can experience some dignity after a lifetime of abuse.

The elephant has a rich history in India, worshipped and revered in culture and then ironically killed for ivory and illegally traded as objects of entertainment.

World Animal Protection strongly urges people to treat this majestic animal with respect so that as a wild animal, the elephant stays in the wild and does not become a cog in the relentless wheel of entertainment.

Join our Wildlife – not entertainers campaign. Wild animals are facing cruelty on a daily basis in the tourist entertainment industry. You can help us end this.