10 Years After Stepping on a Land Mine, 3-Legged Elephant is Making the Most of Life 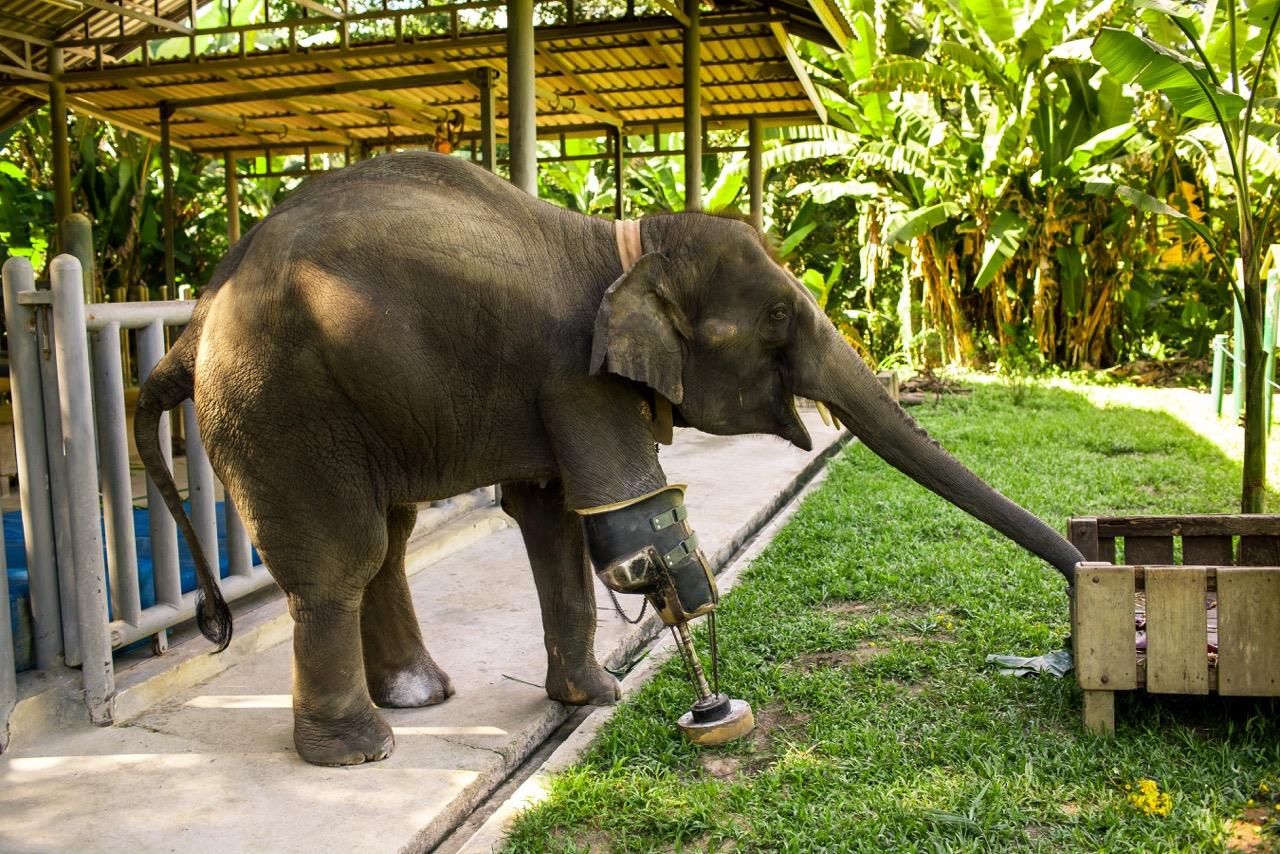 Mosha the elephant was just seven months old when she stepped on a land mine and lost most of her front leg. Fortunately, one of her caretakers jumped to Mosha’s rescue and rushed her to the local elephant hospital, MaeYao National Reserve, which is run by Friends of the Asian Elephant Foundation (FAE). While they were able to save Mosha’s life, her front leg needed to be amputated, leaving her with only three legs to balance her 15,000 pounds on.

A decade later, things are looking up for Mosha. This year, she has received a new prosthetic leg and, ultimately, hope. The first elephant ever to receive an artificial limb, Mosha is adapting to it well and after many trial and errors and a series of prosthetics due to her constant growth spurts, this may well be her final fitting. Sadly, she was not the only elephant to stand on a land mine and lose a limb. Apparently, it’s quite common.

One of these elephants was Motala, who also lost her front leg to a land mine in exactly the same area nearly two decades ago. Like Mosha, she too resides at the elephant hospital and at 50 years old, she’s going strong.

Missing a leg puts a great deal of pressure on an elephant’s spine and their legs. Because Mosha was only young and weighed 1,300 pounds when she lost her leg, creating a comfortable prosthetic leg for a growing elephant was no simple task. As Mosha grew, a new prosthetic leg would be built for her, and by June 2016, she was fitted with her ninth prosthetic leg. This was all funded by donations. As for the artificial limbs, they were designed by orthopedic surgeon Dr. Therdchai Jivacate.

“Every time we fix it, we improve it,” he says. “It’s more sturdy, stronger. This is not in the textbook. It’s sometimes (trial) and error.”

In order to help Mosha, Motala and other elephants who may need a prosthetic limb, FAE has built a prosthesis factory right next to the hospital. According to the website, the factory “will enable easy access of prosthetics to our elephants and help reduce the time and costs it takes to obtain one, as well as additional fittings and molds.” Motala was the second elephant to receive an artificial limb.

It’s been about ten years since Mosha stepped on a landmine and lost her leg. She was just seven months old. Now 10 years of age, it’s amazing to think that she’s spent most of her life without a leg and look at how she’s handled it. To think of the things we complain about, you can’t help but admire this elephant for her bravery and patience. Over the years, she’s made her way through nine prosthesis fittings and now, fully grown, this may well be her final fitting. All in all, things are looking up for Mosha.

In addition to being able to walk around with ease thanks to her new prosthetic leg, Mosha also lives on the Elephant Hospital’s 200-acre grounds where she can enjoy walks in the forest and dips in the pool. One of her best friends at the hospital isn’t an elephant but a man named Palahdee, otherwise known as her caretaker. For the past eight years, Palahdee has been making sure her leg is properly adjusted and her napping mat is clean and laid out flat. You can see how attached Mosha is to Palahdee by the way she cries when he leaves for lunch breaks.

Happy endings don’t always come often so we’re so glad to tell you that, in spite of her circumstances, Mosha is doing well. She can now live happily, once again, on four legs.