Could a Dog’s Nose Be the Key to Detecting Cancer? 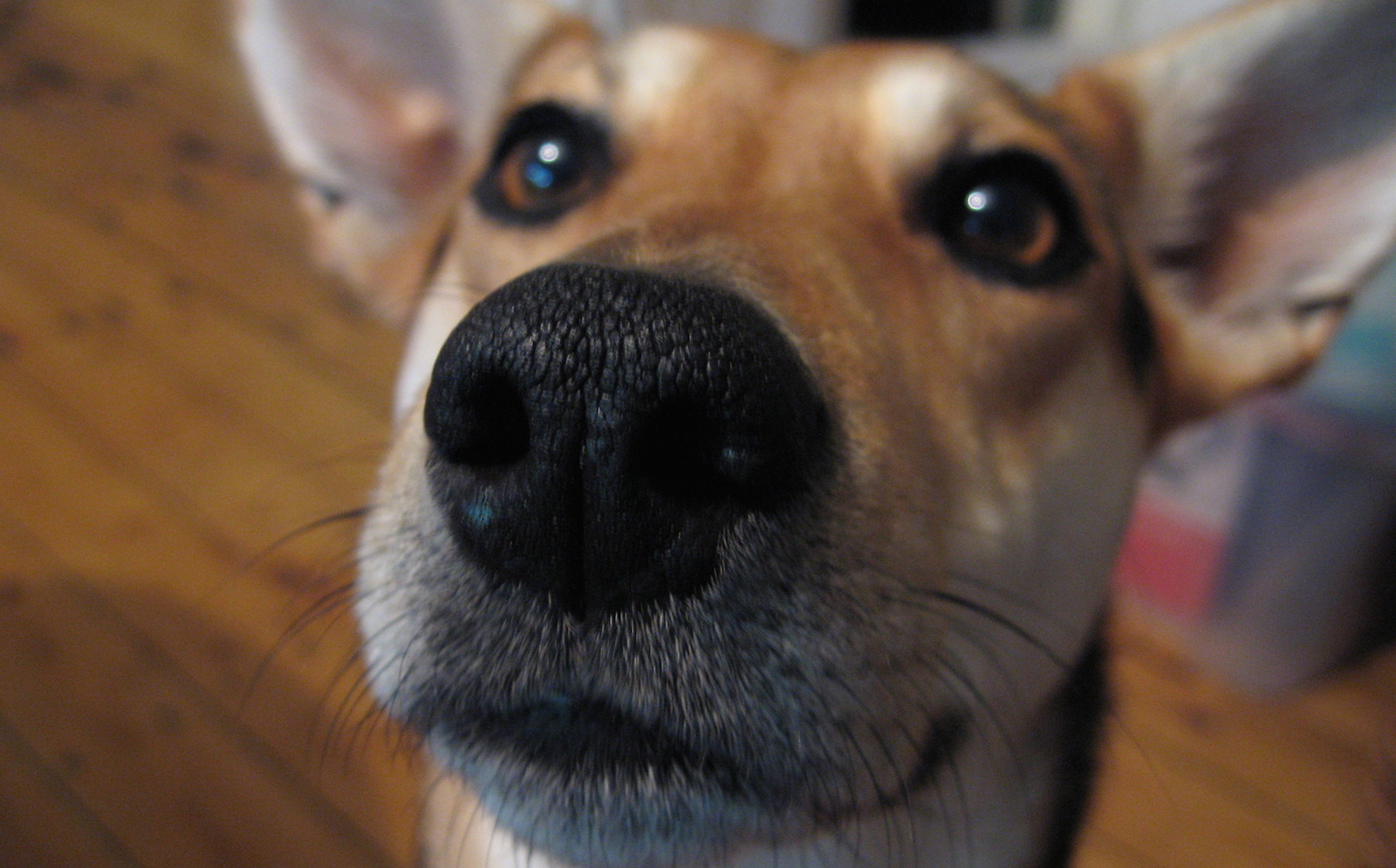 Dogs play a huge role in our lives as companions and friends, but they also play a part that is much larger than this for many people. More and more, we are seeing dogs who act as guides for the blind, and therapy dogs have taken on the responsibility of providing comfort to PTSD patients. Beyond this, dogs are helping people with diabetes detect sudden changes in their blood sugar levels. They can also warn people who suffer from epilepsy of oncoming seizures.

Among these incredible abilities, researchers are also finding that dogs have the uncanny ability to detect certain types of cancer. What is more amazing is that they can detect these cancers at an alarmingly accurate rate.

While these statistics are unsettling, it has been determined that early detection gives people the best shot at remission and survival. However, tests for cancer are not always 100 percent accurate and methods of detection are extremely limited. But there is real hope that dogs can help with early detection and to help save thousands of lives.

Ovarian, prostate, bladder, melanoma, lung and breast cancer can all be detected by dogs thanks to recent research and training efforts. How? The same way dogs detect bombs, drugs and food left in the garbage can – their wonderfully sensitive nose! 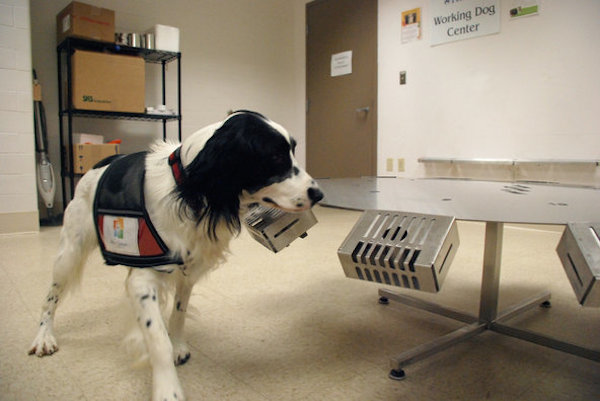 Dr. Claire Guest, an animal behavioral psychologist, was one of the front-runners in the field of cancer detecting dogs. “We published the first report into dogs detecting cancer in 2004 in the British Medical Journal,” she said to Daily Mail. “Showing that our dogs correctly identified bladder cancer in 22 out of 54 cases – our success rates are now 93 percent.”

Guest has all the reason in the world to take comfort that the research she is doing is important. In 2009, her dog, a Labrador retriever named Daisy, alerted Guest to her own, early stage, breast cancer.

“Daisy seemed to be pawing at my chest. She bumped against my body repeatedly – I pushed her away, but she nuzzled against me again, clearly upset,” recalled Guest of a trip to the dog park in February of that year. “She pushed me so hard that it bruised me. Her behavior was totally out of character – she was normally such a happy dog, who would never hesitate to race after the other dogs. I felt the tender area where she’d pushed me, and over the next few days I detected the tiniest lump.” 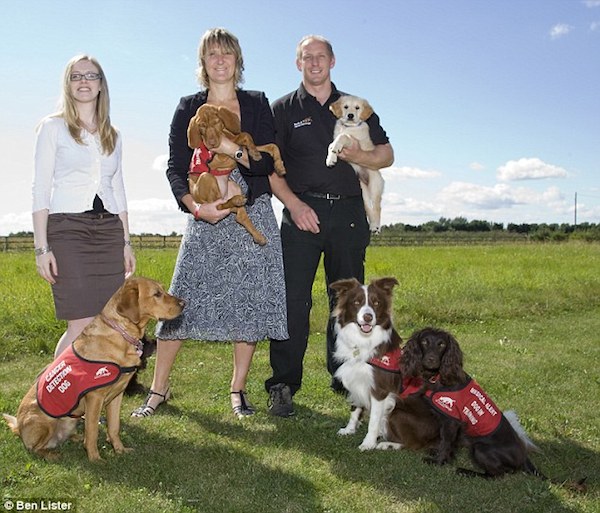 Though the lump turned out to be a benign cyst, the mammogram Guest had as a result of this encounter turned up positive for breast cancer. Thanks to Daisy, after surgery and radiation therapy, Guest is in remission.

Since this event, Daisy has become an incredibly successful cancer-detecting dog. Daisy has sniffed over 6,000 sample of urine and detected over 550 cases of cancer, her success rate is at 93 percent. And Daisy isn’t the only dog working in this field.

A study presented at the American Urological Association’s annual meeting reported that two German Shepherds were able to detect prostate cancer in urine with about 98 percent accuracy. These dogs were trained at the Italian Ministry of Defense’s Military Veterinary Center.

Ohlin Frank, a chocolate Lab, is currently being trained at the Penn Vet Working Dog Center. Though he is only in his fourth training session, his accuracy is currently at 100 percent. Ohlin and his doggy friend, McBaine Chamberlaine, a Springer Spaniel, are both members of a research project at the University of Pennsylvania to help scientists discover the chemical makeup of cancer, which will lead to earlier diagnoses and help save the lives of thousands of people.

The Power of a Trained Nose

Dogs in the U.K., Italy and the U.S. are currently being trained to detect cancer and the process is truly incredible.

Dr. Guest’s charity, Medical Detection Dogs, now has around 15 dogs training in this field. The dogs start basic obedience training at the young age of eight weeks. They are then trained by sniffing urine samples from people with cancer as well as those from people without cancer. The two samples are held in front of the dogs, and in initial stages, they are rewarded each time the sniff a cancer-positive sample. The eventually learn to recognize the unique “cancer smell,” and then move on to more and more complex tests. 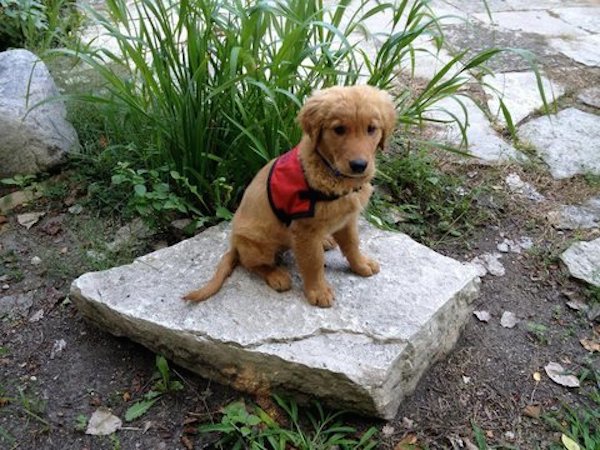 “We published the first report into dogs detecting cancer in 2004 in the British Medical Journal, showing that our dogs correctly identified bladder cancer in 22 out of 54 cases,” said Guest. Since then, the correct detection rates have increased significantly.

The Future of Cancer-Detecting Dogs

Dogs can detect cancer in the urine of patients much more reliably than many of the current tests. With chances of a false positive for conventional tests at around 75 percent, dogs can act as a back up, helping to save patients from painful, and sometimes dangerous, biopsies.

“If medics could use dogs to detect cancer from urine as well as using the standard blood test, they can use both factors to decide who needs to undergo a biopsy,” says Professor David Billington, Pro Vice Chancellor of the University of Buckingham, who specializes in researching treatments for cancer and diabetes. “It would save the health service a huge amount of money, spare patients unnecessary procedures and save lives.”

Scientists at the University of Pennsylvania are using their cancer-detecting dogs to develop electronic systems, or e-noses that mimic the way a dog would detect the smell of cancer. In the mean time, Medical Detection Dogs and Dr. Claire Guest are helping by supplying invaluable statistics on the reliability of their dogs. In just a few short years, we may see huge breakthroughs in this area of research.

While you probably already considered your pup a lifesaver, now there is real scientific proof that this is absolutely the case.