Behind the Scenes Brutality: Snake Charming 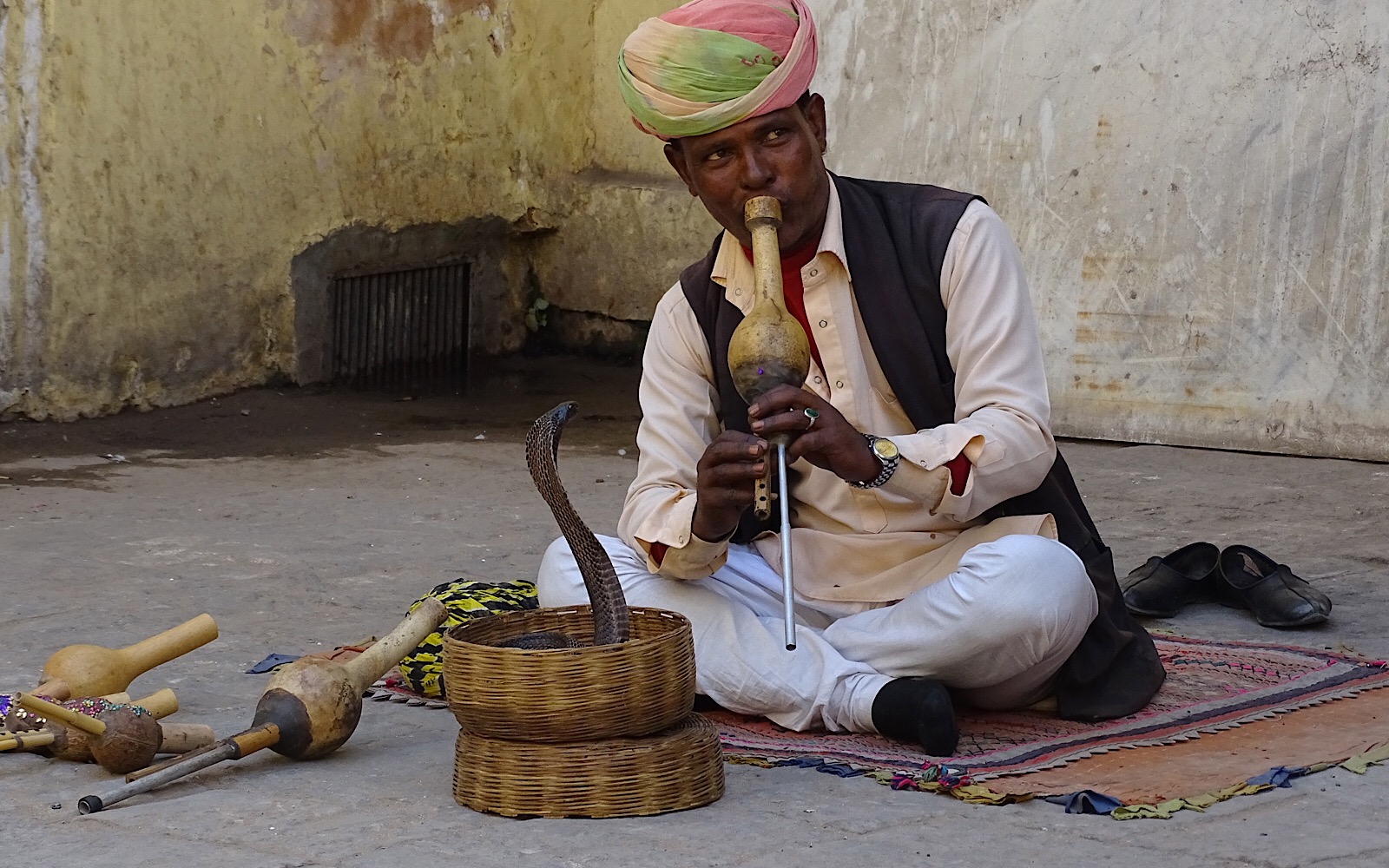 India has a complicated relationship with snakes. Thousands of people die from snake bites each year, and as a result, snakes are feared and even despised in some areas. But conversely, snakes are also revered and celebrated throughout regional culture and religion in India.

One of Hinduism’s principal deities, Lord Shiva, is generally portrayed with a king cobra coiled around his neck. And it was Lord Krishna who said, “Among the serpents I am Ananta.” (Ananta is the infinite divine snake whose coils rest upon the waters of creation.)

In Buddhism, which has its birthplace in India, we see Mucalinda, king of the serpents, spreading his hood over the Buddha in protection against the elements to allow him to attain enlightenment. 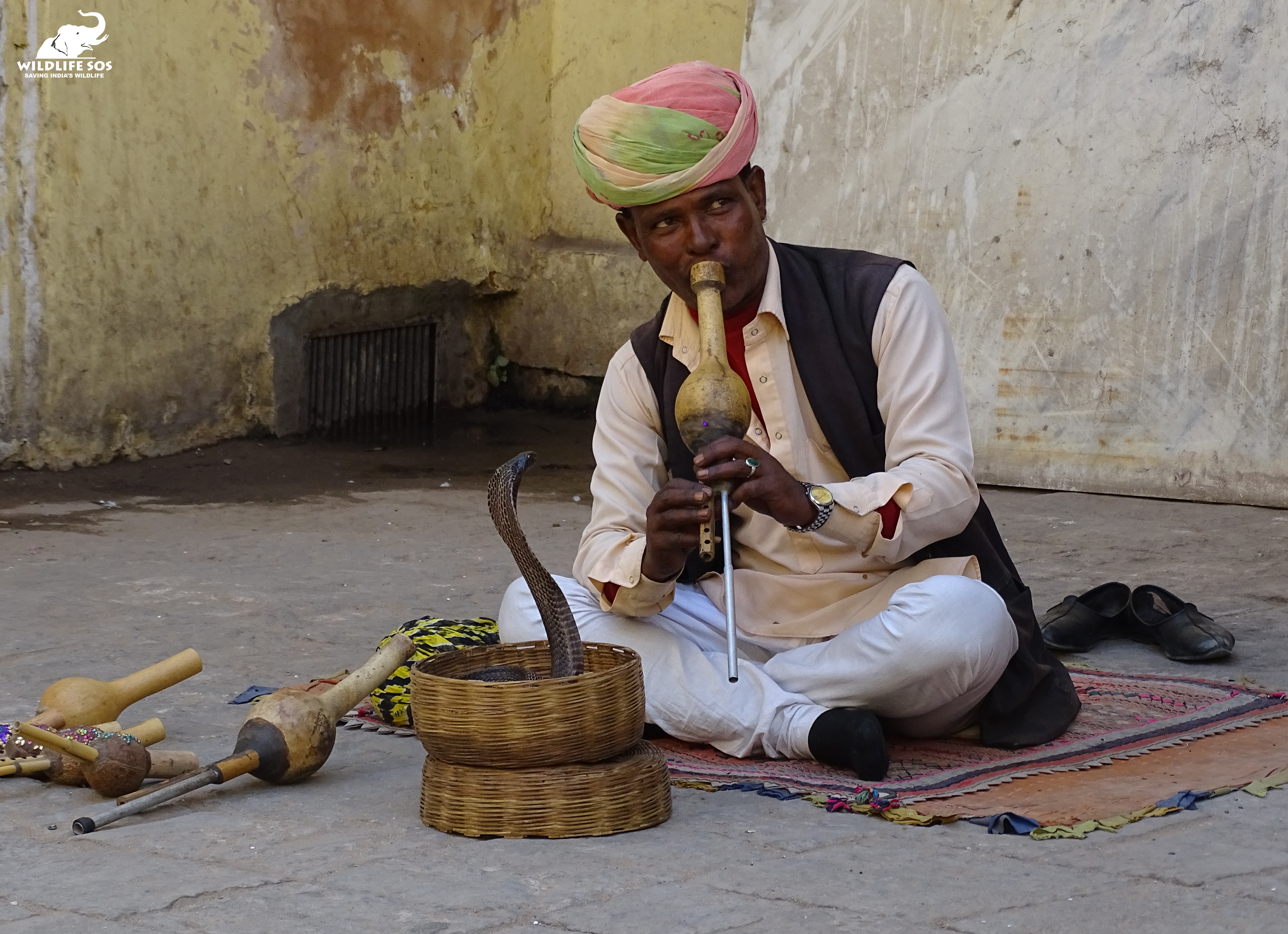 A very different view prevails toward snakes in the West, of course. And for many Westerners, their first introduction to India was a cartoon or movie image of a snake charmer with a flute, a basket, and a swaying cobra. The flutist sits cross-legged in his turban and robes, issuing such a beautifully hypnotic sound that even the deadliest of serpents cannot help but be entranced by it.

Many of us later discover that snakes are, in a practical sense, deaf and thus not responding to any music but rather the charmer’s movements, which they view as a potential threat. What many of us are distressed to discover is that these animals endure shockingly inhumane treatment; they live their prematurely short lives in tiny, dark baskets only to die painful deaths. 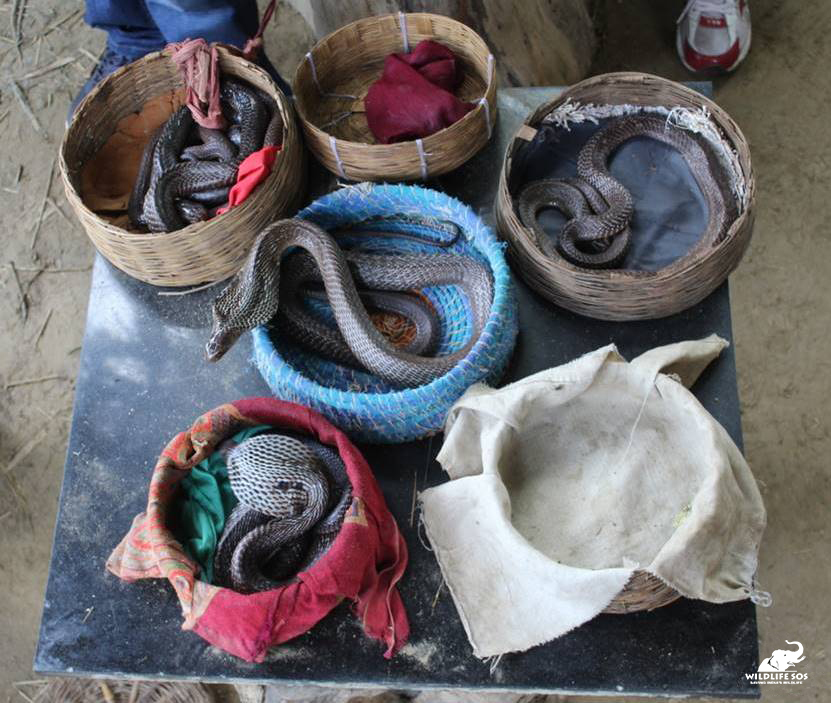 There is absolutely nothing “charming” about this practice. The process begins by poaching snakes from the wild. And though charmers always have several snakes, usually different species, Indian cobras are their favorite because of their spectacular and menacing hoods — as well as the potential threat of death from their venomous bite. Yet there is no threat at all. It’s a charade.

By the time a cobra is ready to be “charmed,” it has been tortured and mutilated to the degree that it cannot even defend itself, let alone pose a threat. The snake’s fangs have by then been ripped out or crushed, and its venom glands have been crudely disabled by gouging them out or bursting them. These methods don’t simply disable the snake’s only means of defense, they remove its ability to even feed itself or digest, essentially condemning the animal to an extended, excruciating death.

Once they’ve wowed a crowd for a few coins, they’re tossed aside to die as the charmer moves on to the next snake in his collection. Non-venomous snakes are not spared either; their mouths are often stitched shut, again making slow starvation inevitable. 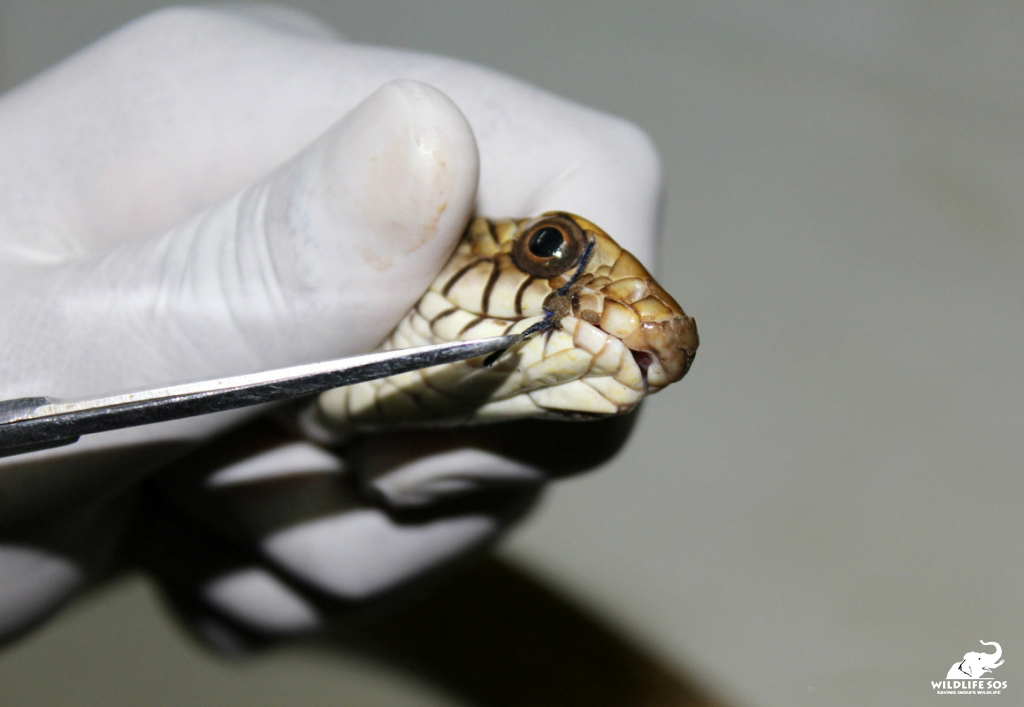 Keeping, handling, and torturing animals in this fashion is not only inhumane, it is also illegal in India. The country’s Wildlife Protection Act of 1972 looks out for snakes just as it does tigers, elephants, and bears. The Indian cobra, like most snakes, is protected under Schedule II, Part II of the act (however, tigers and the Asian elephants are Schedule I species, and are thus afforded more protections).

On paper, the killing of an Indian cobra is a non-bailable offense. It is not enough. The reality is that cobras found in urban areas are nearly always killed, and charges are rarely if ever filed.

We have been looking for solutions. One of them has been creating our 24-hour reptile rescue for large cities like Delhi and Agra. Anyone with an uninvited snake in their home, workplace, motorcycle (yes, this has happened) can call Wildlife SOS and have it removed for no charge.

While this service is designed to keep snakes and people safe in the short term, it also helps keep wild populations healthy. If our vets deem a snake healthy enough, we release it back into the wilderness, far from the pollution and danger of the big cities. Not only that, it is good for the human population too: Over the past six years, roughly a third of the 2,000 snakes Wildlife SOS has rescued in Delhi were venomous. The vast majority of these were Indian cobras, a smaller percentage were kraits, and an even smaller percentage were vipers. 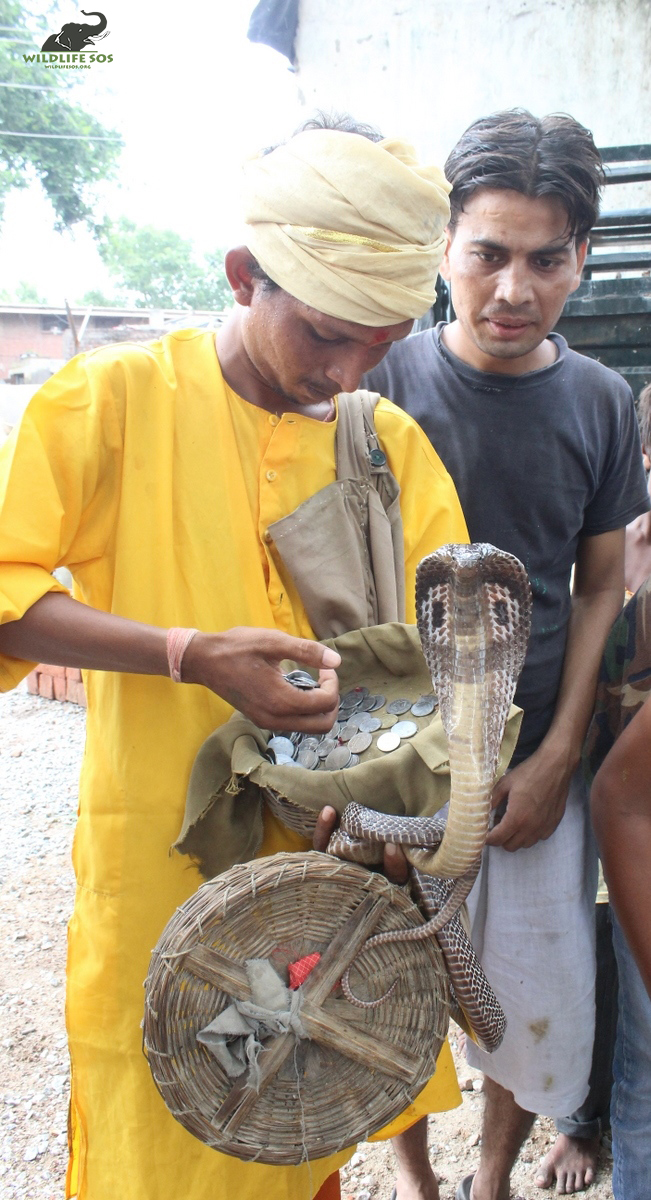 Removing or rescuing potentially deadly snakes is not an easy task, nor is it very glamorous. As such, finding people with the knowledge and experience to do it can be a challenge. Our strategy to fill the vacancies is to bring on snake handlers from a variety of backgrounds: university settings and other training programs and — believe it or not — from the ranks of actual snake charmers on the street.

As reprehensible as their trade certainly is, many of them seek redemption if given another way by which to feed their families, and we are an organization that believes in second chances. People resorting to this sort of subsistence living tend to come from communities that suffer high rates of illiteracy and poverty. What good would incarceration do for them or the animals?

Once released from prison, a lack of opportunities would likely funnel them back into the very same trade again. We’ve seen so many former snake charmers express heartfelt gratitude for the opportunity to help animals rather than hurt them — and they also displayed incredible snake-handling expertise. The result has been great for the communities. And it means fewer snake charmers abusing innocent animals on the streets. 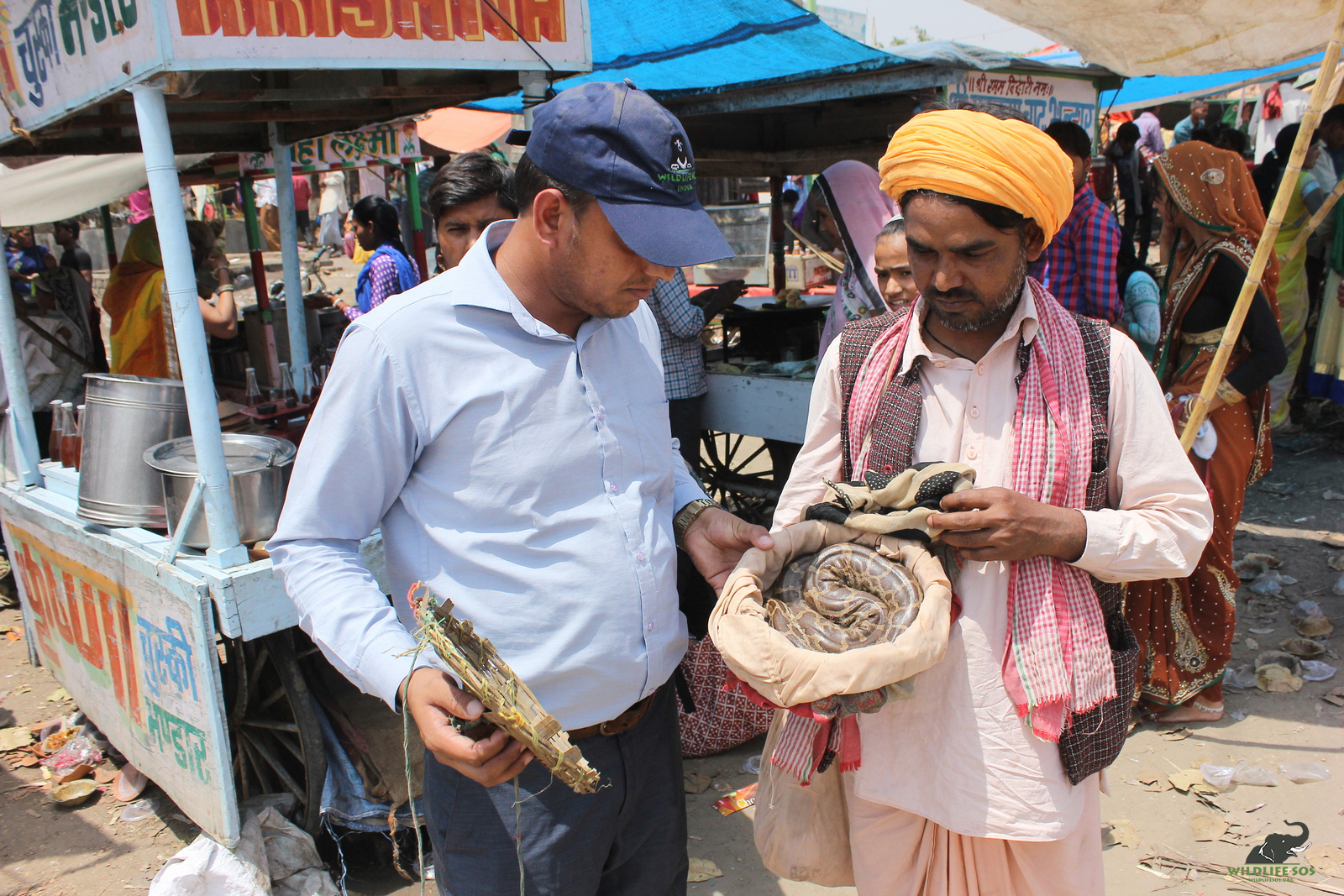 That’s what we are doing for now, and we’re always on the lookout for new strategies to address the problem. So, what can you do? We’re sure you already know: if you’re planning to visit India, don’t encourage snake charming or any other form of entertainment-based animal abuse. Don’t pay to watch any animal perform; it only encourages the brutality behind the scenes, promotes poaching and illegal possession of wildlife, and bolsters industries dedicated to making a profit off suffering.

Snake charming is not enchanting. It’s not courageous. It’s certainly not charming. It is simply a cruelty-laced means of earning money off the poaching, misery, and torture of an innocent animal.

We know there’s a vast amount of PR work to be done for snakes through no fault of their own. They’re not cuddly, they’re not everyone’s favorite animal, and they’ve been unfairly vilified in Western lore for millennia. But snakes are also magnificent, beautiful, and fascinating creatures that deserve our respect and empathy as much as any other species.