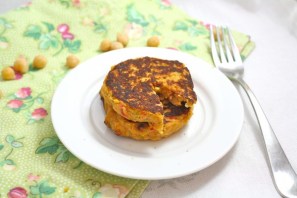 I’m going to be honest here. I didn’t think it would actually happen. I have been on the hunt for “the one” veggie burger for years. Years. YEARS! Do you know how many beans, veggies, and other random mix-ins I’d rather not talk about have been wasted in this process? On second thought… don’t tell me. I don’t want to know. You have to understand how big this is. It’s monumental really. LIke, seriously. They should erect a monument to this burger and I should be the one to cut the red ribbon.(I’ve always wanted to hold those big scissors!) This is big enough for me to say “like”. And I never say like. Except when I do. Which is not often. Like, really. But there is a word I throw around even more seldom than like, and that word would be ultimate. I say it when I mean it. If a recipe doesn’t rock your socks off, I’m not going to call it ultimate. If I’m still wearing socks at the end of the meal, then I don’t call it ultimate! (Kids, don’t try this at home.) You know the expression “when pigs fly”? Yeah, I haven’t used it. You know why? I’ve been using “when I find the ultimate veggie burger” instead because it was even less likely. Folks, I am looking for a veggie burger that is vegan, gluten free, grain free, LOW CARB, and doesn’t taste like the socks it rocked off. And I found it. Not only do these miraculous patties of joy meet all my criteria, they are also endlessly customizable to whatever you want. Add in different veggies, beans, flavors… you have no excuse not to make these because they adapt to whatever you have on hand. So actually… you should go make these now. Wait, did I just see a pig fly by?

One of the great things about these veggie burgers is that they are completely customizable to what you want/like/ have on hand. This recipe calls for 3/4 cup of veggies, but the sky is the limit to what those could be. You can use veggies that are fresh or frozen and defrosted (measure after defrosting). You can also use a mixture of veggies totaling to 3/4 cup. Let your imagination (and your taste buds) run wild!

Per Serving: Calories: 107 | Carbs: 19 g | Fat: 2 g | Protein: 6 g | Sodium: 111 mg | Sugar: 4 g Note: The information shown is based on available ingredients and preparation. It should not be considered a substitute for a professional nutritionist’s advice.