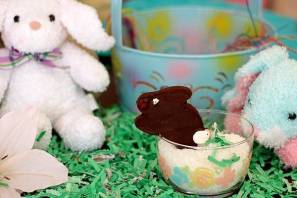 When I decided to be vegan, there were a lot of things I didn't know. Most chocolate, for example, is not vegan. Correction: Most chocolate is vegan, but most chocolate candy is not vegan. Not being much of a candy person, I was never really bothered by this. Whenever I have a chocolate craving, it's for organic dark chocolate with dried fruit as the sweetener. But there's an exception: Easter bunnies. Maybe it's because my kindergarten's class bunny bit me the weekend before I was supposed to take him home. Maybe it's because they remind me how it feels to finally get the prize at the end of the (egg) hunt. Or maybe it's just because those pastel-painted baskets make everything look better. There's just something about those Easter bunnies. Instead of going without this year, I decided to try making my own. I thought about just melting organic dark chocolate and pouring it into a mold, but that seemed too ordinary. These bunnies needed to be special. They were, after all, going to be a prize. I decided to indulge my inner food scientist and see what would happen if I tried the "recipe" on the box of Hershey's cocoa: Add shortening or oil to make baking chocolate. From there, I tweaked and substituted until I had a vegan, chocolate Easter bunny that's just the right amount of sweet and just as creamy as milk chocolate (oh, and devoid of any artificial ingredients). Did I mention it's packed with coconut's medium chain triglycerides, which lower cholesterol? And don't forget the almond's natural insulin-moderating abilities! This is one bunny you don't have to feel guilty about afterwards.

Mekkie Bansil is a long time foodaholic whose passion for tree-hugging is only superceded by her cooking-turned-science experiments. She spends most of her free time tweaking her blog, Measured in Pinches, where she writes about health, cooking and why life should always be measured in pinches.