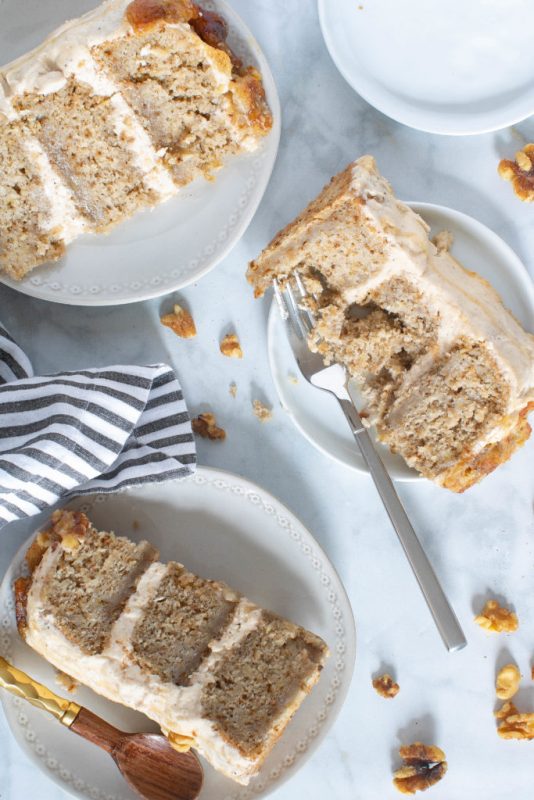 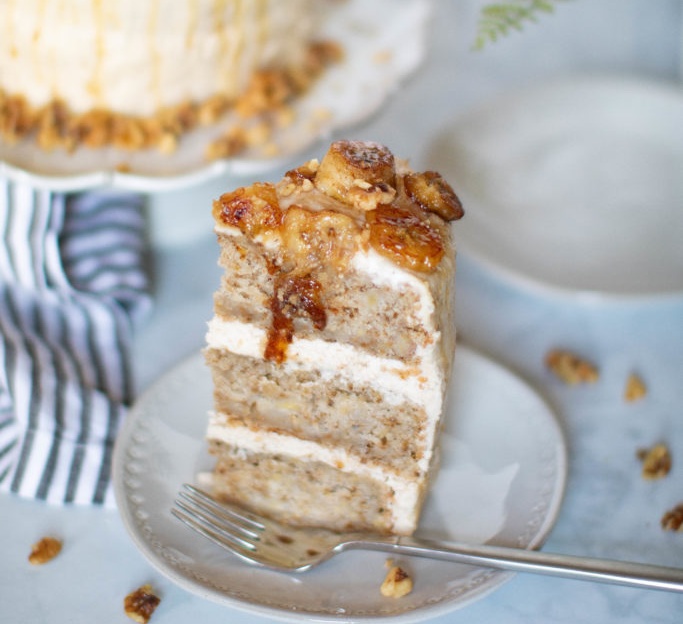 Not only is it completely moist and fluffy, but it’s rich in flavor and comes loaded with banana and nut flavors + warm spices, that when paired with this airy vegan browned butter-cinnamon infused buttercream, it’s absolutely irresistible.

For the Cinnamon Browned Butter Buttercream:

For the Cinnamon Browned Butter Buttercream:

For the Caramelized Bananas:

Note #1: I often let my cakes cool for 30 minutes or until them are very cool when touched and then place them in the refrigerator to cool completely for another hour or so; this makes icing easier.** Note #2: Adding a thin layer of buttercream around cake and chilling it for 30 minutes to 1 hour before adding remaining buttercream does the trick for an easier frosting of cake; this called a ‘crumb coat’; to add a thicker layer of buttercream on cake, simply make the buttercream recipe TWICE and apply full buttercream to the tops and sides.** Note #3: If the buttercream is too thick, add additional milk (1 teaspoon at a time); if it’s too thin, add additional powered sugar (1 tablespoon at a time) For Storage: Keep cake tightly wrapped using plastic wrap and refrigerated for about 1 week. For More Layers: For THREE 6-inch layer cake, just DOUBLE the ingredient measurements; for THREE 8-inch layer cake or TWO 9-inch layer cake, just TRIPLE the ingredient measurements.

Food Blogger + Recipe Developer, Shanika, is part kitchen ‘ninja’ and connoisseur of interior decorating (hence her passion for beautifully staged food photos). She is a self-taught cook | baker, who has also partnered with top brands (Navitas Organics, SunButter, So Delicious Dairy-Free, Organic Valley, + more) to be the source for comfort food and sweets, with a healthy twist. She desires to help others turn the ‘little’ that they have into something magical---great food! On her blog, Orchids + Sweet Tea, you will find dairy-free, gluten-free, and vegan versions of your old + new favorites!