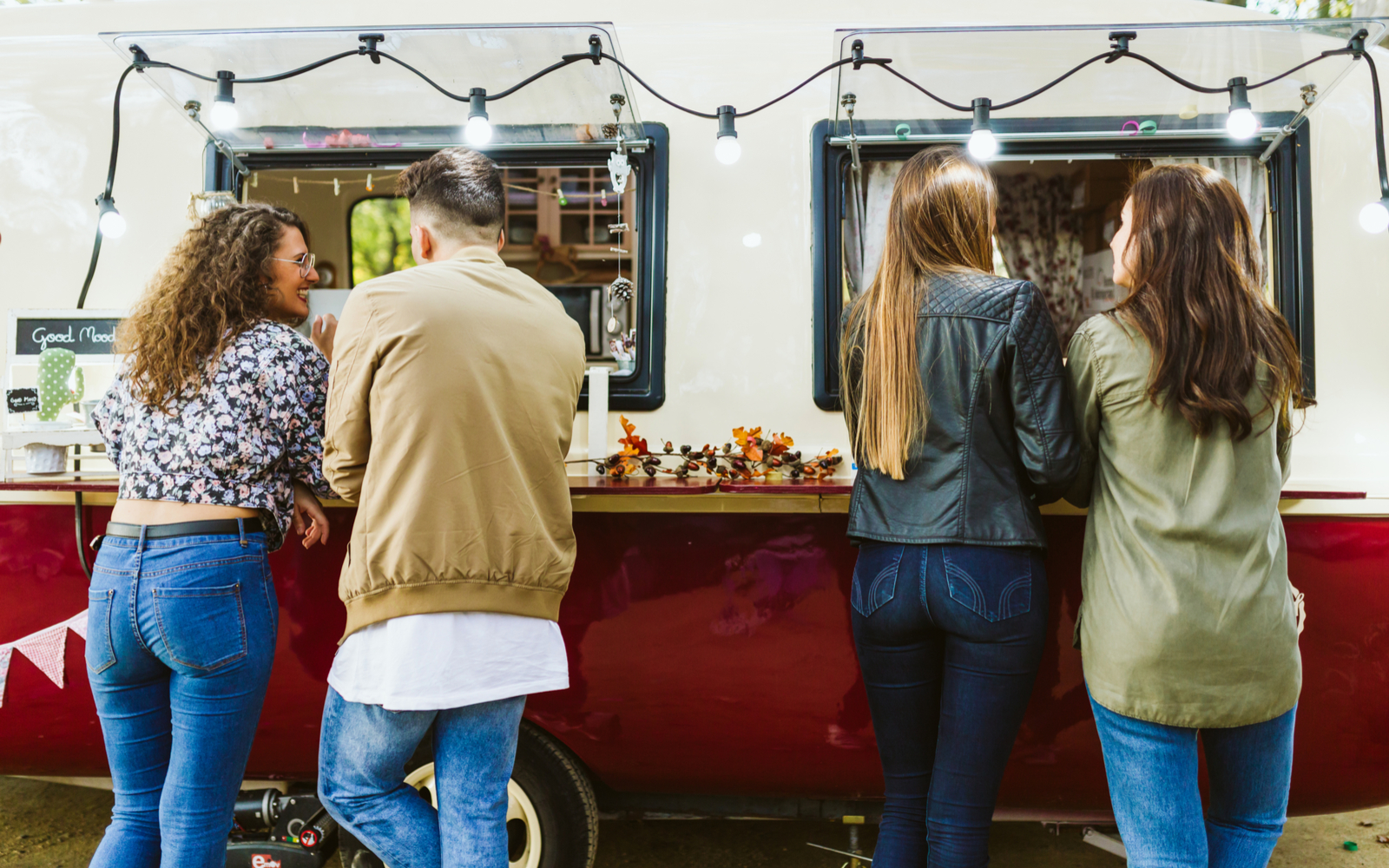 There is something just so effortlessly cool and inclusive about food trucks. Not only are their owners able to decorate their trucks however they desire, but their inherent mobility means a wider gamut of cuisines and flavors can be made available to people across all income brackets. While only the most privileged diners can afford to regularly eat out at fancy restaurants for their meals, food trucks are literally on the street catering to people of all walks of life.

What’s even more exciting is just how many plant-based food trucks are successfully operating and serving up delicious, vegan fare every day. We dove deep into the world wide web to find a selection of different vegan food trucks to highlight for you all today — a tough call, considering how many appetizing plant-based food trucks exist! Here are seven of our top picks for either 100 percent vegan or vegetarian food trucks in America — check them out below, and let us know which ones we missed!

Check out their schedule here so you know when you can stop by! V-Grits, which stands for “vegan girl raised in the South” is an all vegan food truck based in Louisville, Kentucky, and it’s been serving up plant-based comfort food since 2015. A few of V-Grits’s famous dishes include the Loaded Mac & Cheese (which consists of creamy vegan mac topped with BBQ jackfruit and coconut bacon), the Where Do You Get Your Protein Burger (a double patty behemoth of a plant-based sandwich), Vegan Chicken and Waffles, and a Vegan “Crab” Cake Po’ Boy.

The truck is out a few times per month, but you can also text “vgrits” to 88202 to receive a message when the truck is scheduled to be serving.

The Shimmy Shack food truck aims to dispel the myths that veggie food is bland and boring, and from the soothing mint green hue of the truck to the comforting, indulgent vegan fare available for purchase, we’d say they’re doing a fine job! Their Veg-American menu features burgers (such as their “Southwest” burger, which comes with a black bean and rice patty with guacamole, salsa, jalapeños, and lettuce), vegan hot dogs, vegan chili, “cheesy” vegan nachos, fries with a variety of dipping sauces, and vegan milk shakes to sweeten the deal.

Check out their calendar to find out where they are.

Bombay Food Junkies is an all vegetarian and very vegan-friendly St. Louis-based food truck serving up flavorful Indian street food items like Bombay Chaats, which are essentially carb salads filled with potatoes, chickpeas, samosas, puffed rice, or even a combination of all of the above, Frankie wraps, such as their vegan “Chicken” Tikka Roti Wrap Combo, which comes with “chicken” marinated in a creamy and rich vegan cashew sauce and tikka spices served inside a crispy plant-based roti with a side of your choice, Indo-Chinese noodle dishes, and much, much more.

Check out their schedule here to find out where they are.

The Cinnamon Snail, a 100 percent vegan food truck that is open between Mother’s Day and Thanksgiving annually, was born out of a vision to bring vegan food to the street, thereby making plant-based eating seem approachable and craveable to both enthusiastic vegans and meat and dairy eaters alike. Indulgence and easy decadence are key: think elaborate vegan doughnuts, and lunch items like the “Korean BBQ Seitan” sandwiches, which features smoked chili grilled seitan, sautéed kimchi, and greens on a chili butter grilled tortilla.

Visit them at the Red Bank Farmers Market on the corner of West Front St. and Shrewsbury Ave. every Sunday 9am-2pm, between Mother’s Day and Thanksgiving. 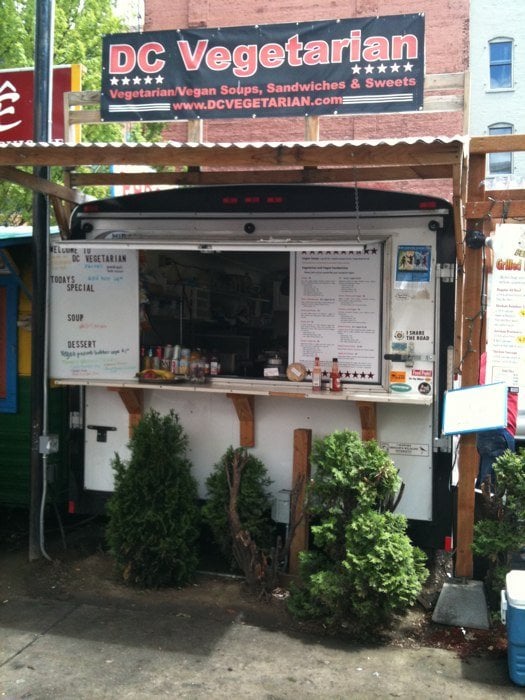 D.C. Vegetarian is an all-vegetarian and extremely vegan-friendly food cart located in Portland, Oregon. They tend to serve veggie-centric takes on classic American fare, including their own vegan iterations of the Philly cheesesteak sandwiches, and different burgers. Whether you’re craving an old comfort staple like a vegan grilled cheese sandwich, or just want a light and healthy snack to grab while you’re on the go, like a sandwich piled high with hummus and veggies, D.C. Vegetarian has your back.

Visit them at SW 3rd (and Stark) in downtown Portland, Oregon. 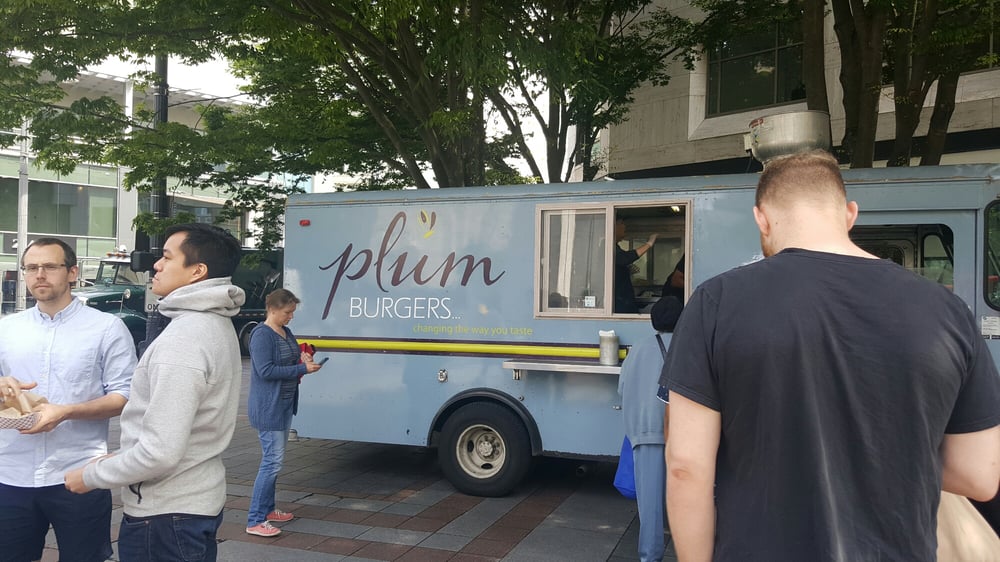 What originated as a small, vegan sandwich shop in the 70’s has grown into the Plum Restaurants empire, a group of vegan eateries dedicated to nourishing the community with wholesome, organic, vegan foods. The brainchild of chef and restaurateur Makini Howell, Plum Burgers is an all-vegan food truck serving organic, vegan burgers to hungry Seattleites. The truck’s menu changes as ingredients go in and out of season, but you can always count on yummy, innovative fare, like the “Crazy Jamaican Burger”, which features Jamaica-spiced tofu, potato salad, tomatoes, grilled onions, ripe plantains, and mustard aioli, or the “Macho Burrito”, which includes vegan chorizo, black beans, Mexican rice, mixed greens, cheese, orange pico de gallo, avocado, chipotle, and jalapeno aioli.

Catch this truck out and about in several locations; this map will tell you where to go!

Soulgood is a healthy, organic, plant-based food truck in Dallas that strives to provides healthier fast food options. Burgers, tacos, pancakes, cupcakes and more are available to order, and all Soulgood menu items are made from fresh ingredients — veggies are locally grown from organic farms, artisan European loaves of bread are made with pure ingredients, and vegan meat is available to put in your burgers and sandwiches for some hearty protein.

We also wanted to take some space to recognize BBQ Revolution, an Austin-based food truck that’s on a mission to prove that the very best BBQ is meat-free! They use as many local vendors and ingredients as possible and actually smoke all of their proteins (like vegan “brisket”, tempeh “ribs” and soy curls) on a true smoker. Their side menu items include “Mom’s” Potato Salad, vegan coleslaw, beans and a special rotating Mac and Vegan Cheeze.

Check out their hours and where to find them on their website here.

If you’re interested in eating more vegan food but aren’t in one of the above states, or are just interested in trying your own hand at making comforting vegan recipes, then we highly recommend downloading our Food Monster App, which is available for both Android and iPhone, and can also be found on Instagram and Facebook. The app has more than 8,000 plant-based, allergy-friendly recipes, and subscribers gain access to ten new recipes per day.

Also make sure to check out some of our other American city guides, listed below: