How to Make Raw Vegan Fudge of All Kinds! 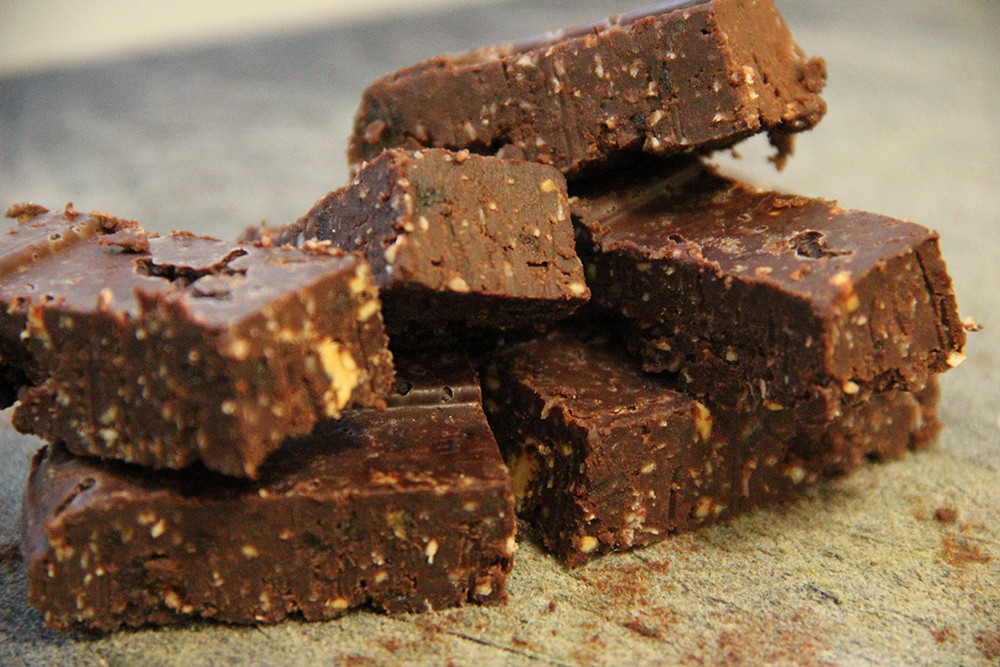 Like many of you probably are, I’m a huge fan of fudge. I mean, really: if you’re a chocolate fan, what’s not to love? Soft, melt-in-your-mouth, bite-size chocolate heaven, people! When I became vegan several years ago, it was one dish I was worried I’d have to give up – traditional fudge usually requires both milk and butter galore.

If you’re a plant-based eater and want to try for a veganized version of your fudge-y favorite, I have some great news for you: it’s super easy to make fudge vegan-style! Now, be forewarned, this is more of a choose-your-own-adventure tip sheet for the basic stuff you’ll need for a vegan fudge recipe. If you’re more of the type that appreciates a tried-and-true recipe, step by step, we still have you covered with this awesome recipes for raw vegan chocolate and almond fudge here. But, if you’re in the mood to experiment a little, read on!

The Tools Needed for the Job

Now, here’s the best part of this how-to. To make vegan fudge, you have pretty limitless possibilities. It’s really a choose-your-own-adventure dish! To imitate the texture and taste of the traditional fudges many of us all know and love, you really just need four things for ingredients:

Of course, you can’t make fudge without chocolate. To make sure you’re using the healthiest, plant-based stuff possible, opt for raw cacao powder or ground cacao nibs in their purest form. If you can splurge for organic, do so to avoid any nasty byproducts. If you opt for chocolate powder, which is often just cacao with some sugar mixed in, make sure it’s dark, not milk chocolate, and, even with the dark stuff, check the label to make sure there aren’t any added dairy ingredients. Also, if you use chocolate powder, account for any sweetener added and use a little less of ingredient number two listed below.

2. A liquid sweetener of some kind

Take your vegan pick: maple syrup, molasses, or coconut nectar. Coconut nectar is my person favorite, as it’s not as processed as some of the others, but any one will do. The biggest trick is to make sure it’s a liquid form, rather than powdered sugar or something like that. The liquid sweetener form will give you that gooey texture you want for your fudge, usually played by melted butter in traditional fudge recipes.

This is the stuff that will bind your fudge together. Vegan options that will give you all very different (and all very to-die-for) results include thick nut butters like almond butter, sunflower seed butter, cashew butter, or peanut butter. Not nuts for nuts? You can even try tahini.  My favorite? Sunflower seed butter, which, when combined with the other ingredients mentioned here, makes for fudge that tastes a whole lot like a Reeses Peanut Butter cup, minus all the nasty stuff!

This role is typically played by dairy milk in conventional fudge, but you can easily veganize this part of any fudge recipe with non-dairy milk, such as almond milk, cashew milk, and the like. Honestly, I usually just go with filtered water. It does the job just fine, as it’s really the base, sweetener, and cacao flavors you’re trying to make prominent here.

The basic ratio for a standard batch (8 by 8 square pan, 16 or so small bite-size fudge pieces) raw vegan fudge will include 1 cup of your thick base + ¼ cup cacao powder + ¼ cup liquid sweetener + 1 – 3 teaspoons moistener (added a teaspoon as time, until you achieve a moist, thick, cake-batter like consistency.)

Put your fudge into your glass pan, cover it, and freeze for at least 2 hours, or refrigerate for 3 – 4, and there you have it: healthy, raw, vegan fudge! The greatest part of all of this is that you can try so many different variations, so long as you have the basic four parts intact.

Once you get the basic formula perfected to your loving, experiment with the many variations fudge can offer – add a pinch of sea salt to a batch. Try adding chopped almonds, pecans, or peanuts. You might even get crazy and add some fun extras, like very finely chopped (or blended spinach) for a hidden green punch, or a tablespoon of chia seeds for some texture and extra nutritional power.