5 Easy Ways to Cut Down on Your Meat Consumption 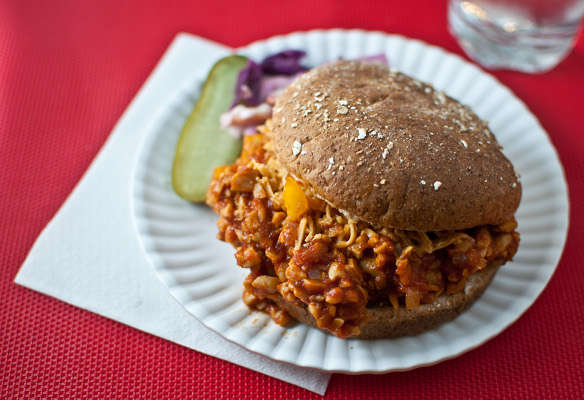 Do you love animals and realize that a meat-free diet is healthier for both the planet and your body, yet find it difficult to give up your taste for flesh? First of all, congratulations on recognizing that eating less meat would give you a healthier body (hello weight loss, perkier complexion, and decreasing your risk for disease!) Also, it’s good that you have a heart telling you those chicken factories are ruthless (because they are).

Gaining the knowledge and making a choice to live a healthier lifestyle is the first step towards vegetarianism. Next comes the actual act of saying goodbye to meat forever. Don’t fret; it’s not too hard these days. By keeping some pointers in mind and employing a few tricks, you can easily reduce your meat consumption.

Eventually, you’ll be a full-fledged, conscious citizen who knows their choices aren’t harming others or our Earth, and living that lifestyle feels pretty amazing. But even if you say you’ll never be vegan, at least try limiting your animal product intake. Here are five easy ways to cut down on your meat consumption.

1. Start by eliminating all processed meats

Quitting any habit is tough. If you eat meat for two or more meals every day, you can understandably feel like you’re missing a part of yourself when you implement a lifestyle change. So, start small and say no to certain types of meat at first. Be picky. Stop eating processed meats only, at first, since these are the worst types of meat for your health. Give yourself a week or two where you consciously refuse offers from friends to eat a hot dog, or you read labels at the grocery store and choose a different brand from your processed option. If you have to choose between processed chicken nuggets and a farm-raised, organic chicken breast, it’s obviously better to choose the real meat. Need some convincing on why processed products are so awful for you? Check out 6 Scary Facts About Processed Foods.

2. Cut your serving size of meat dishes in half

If you’re used to eating a double cheeseburger, try having a single. If you eat a bowl of pasta with ten meatballs, try counting out and eating only three. Before each meal, think about how much meat you usually eat, and replace that with plant-based foods. You’ll be weaning yourself off of meat by allowing your stomach a chance to feel full on less meat and more vegetables. After you’re comfortable eating only a few meatballs with your spaghetti, you’ll be one step closer to taking the more drastic measure of eliminating meat entirely.

After a couple weeks of eliminating bologna and chicken nuggets, as well as reducing the amount of meat you eat in one sitting, you’re ready to eliminate red meat. It’s not as bad as processed meats, but it’s worse for your health than poultry. We know for a fact that there is a link between red meat consumption and an increased risk of premature death. One study found that. For instance, a 2012 study found that adding just one three-ounce serving of unprocessed red meat — that’s a size no bigger than a deck of cards — to one’s daily diet was associated with a 13 percent greater chance of dying. An Pan, a postdoctoral fellow at the Harvard School of Public Health in Boston and lead author of the study, was quoted by the Los Angeles Times, saying “Any red meat you eat contributes to the risk.” The worst meat for our health is red meat, so bid goodbye to that first before warding off chicken.

4. Build meals around vegetables, not meat

Stop making meat the center star of your dish. Part of changing from a meat-eater to a conscious citizen is changing the way you think about food and how you should eat. Viewing steak, hamburgers and fried chicken as the main course and beans, sweet potatoes and salad as the sides isn’t the way to think in your new lifestyle. When you hear burger, think black bean. For sandwich, think of fried tempeh or grilled tofu. To get you thinking about plant-based meals, check out 5 Must-Try Vegan Alternatives for the Die-Hard Meat Eater and 25 of Your Favorite Classic Southern Comfort Foods Made Vegan.

Making a holiday or a special occasion out of your choice is a great way to stay motivated in your goal to cut out meat, as well as get children, family members, and friends excited about it too. If you cook for your family, plan that every Monday you will cook a meat-free meal. Meatless Monday is more than just a catch phrase; it’s an international campaign that encourages people to cut down their meat consumption. It began in 2003 in association with the Johns Hopkins Bloomberg School of Public Health and is now active in 29 countries. On the Meatless Monday website, you can download a tool kit to help your new Monday tradition.