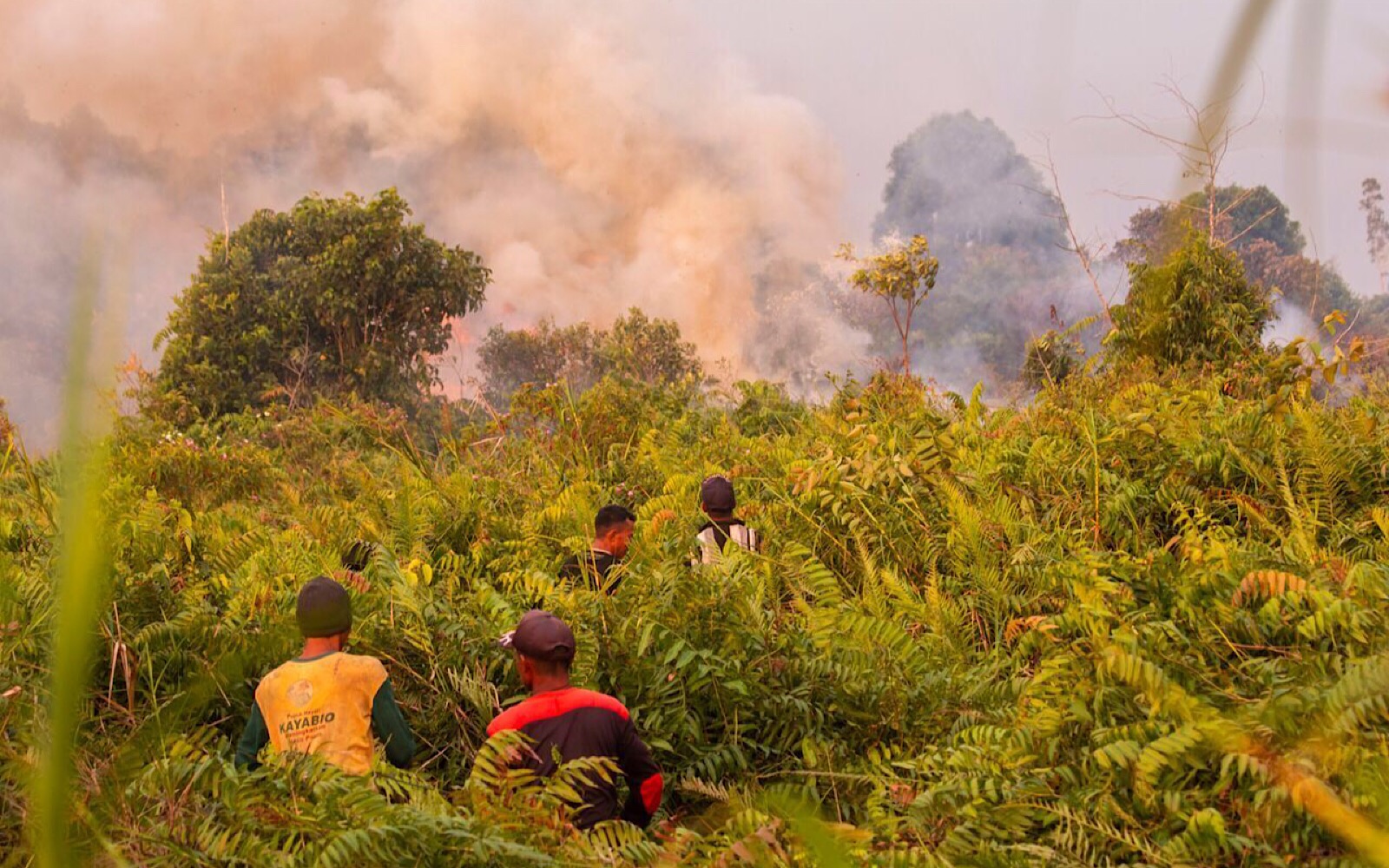 It seems like half the world has been plagued with wildfires this year, leaving both humans and wildlife devastated, with many homeless or even dead. The wildfires in Borneo are currently threatening priceless orangutan habitats, and palm oil plantations could likely be to blame yet again.

In 2015, Borneo suffered tremendously from fires started intentionally by farmers clearing land and big companies burning forests to create more oil palm (and other industrial) plantations. Five million acres were burned and over 25 percent of orangutan habitat was destroyed. In 2016, the Bornean orangutan received a status of ‘Critically Endangered’ by the IUCN, and the impact of these fires contributed to this.

International Animal Rescue (IAR) managed to rescue more than 60 orangutans from these fires, but now, more fires are threatening the habitats AND the rescue center.

On Thursday, August 23rd, a large fire started next to the IAR center in Ketapang where dozens of orangutans live and are being rehabilitated. 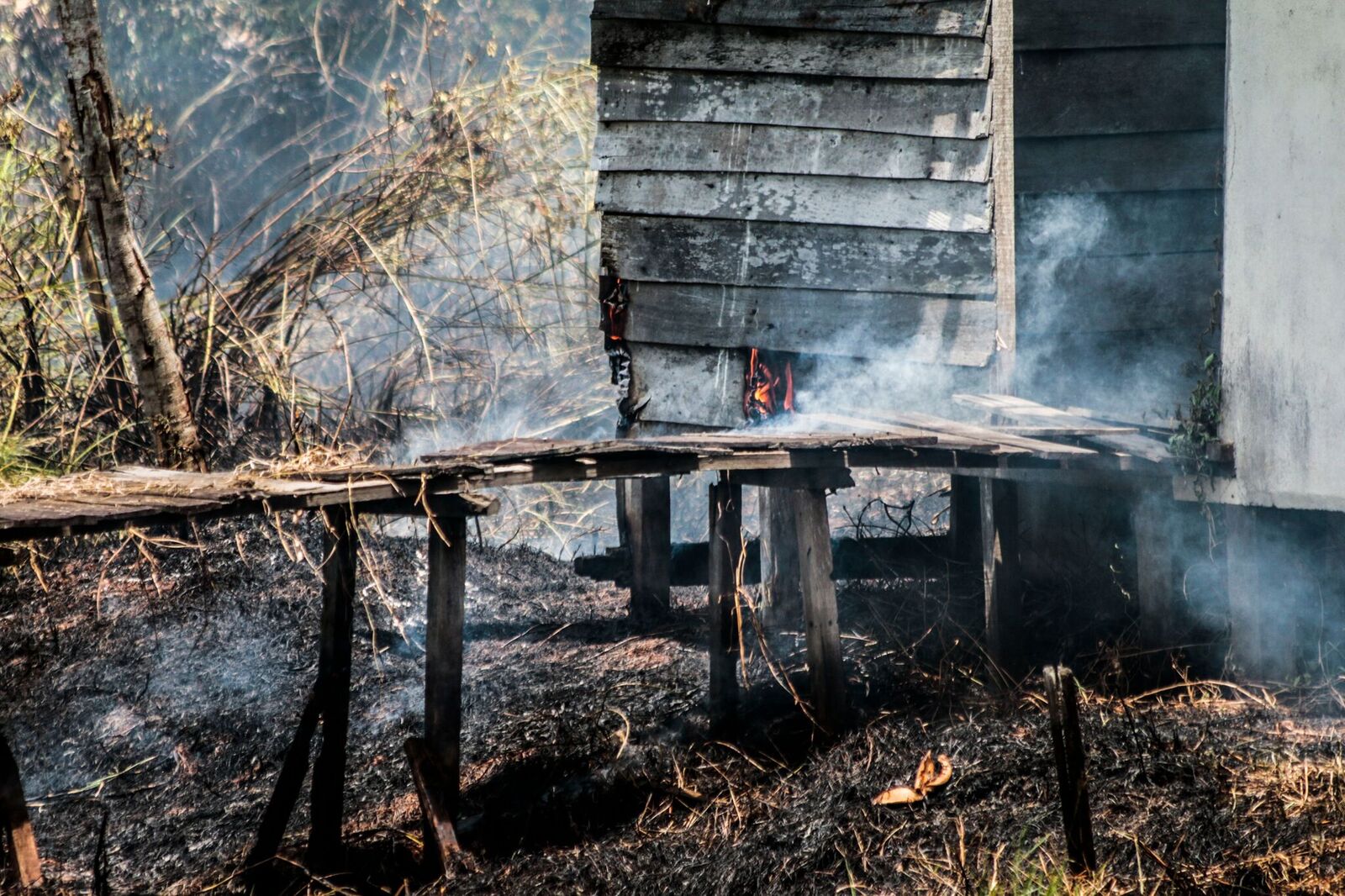 “Thankfully the local police and the military came to help put the fire out. It took five hours to get it under control,” said Adi Irawan, Manager at IAR’s center in Ketapang. “We are incredibly grateful to the Police and Military departments for their assistance. Without them, we would never have never been able to stop the fire.” 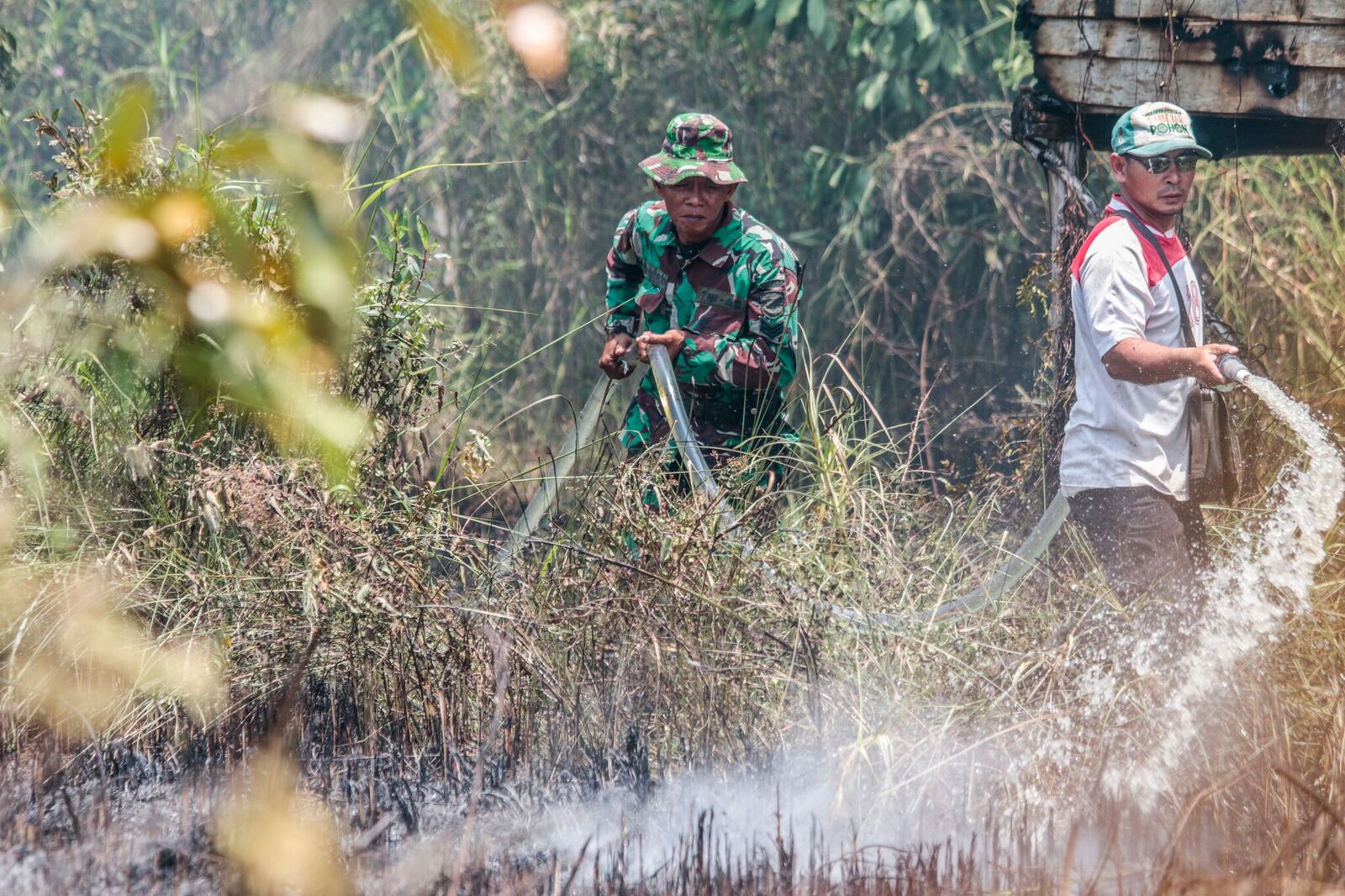 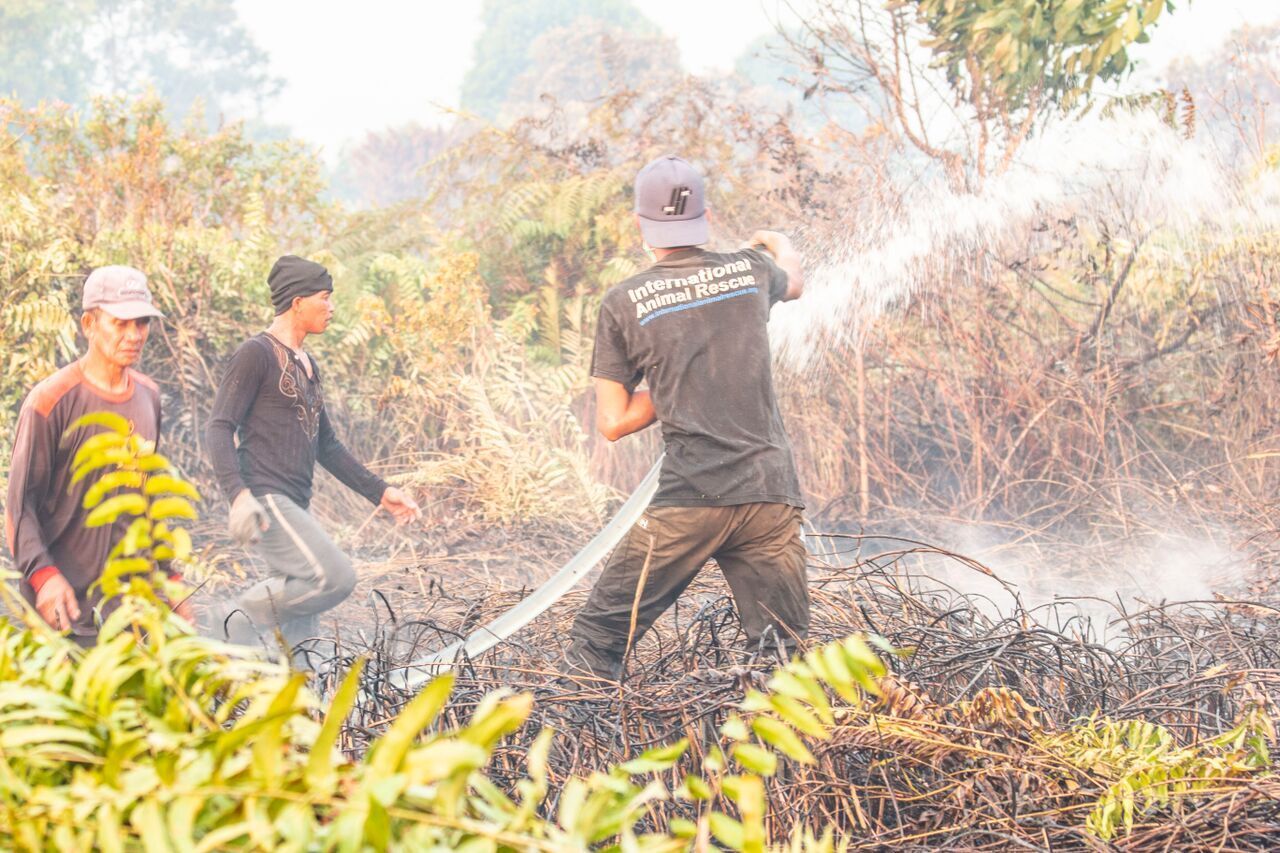 The air quality in Ketapang is deteriorating, with visibility decreasing each day. 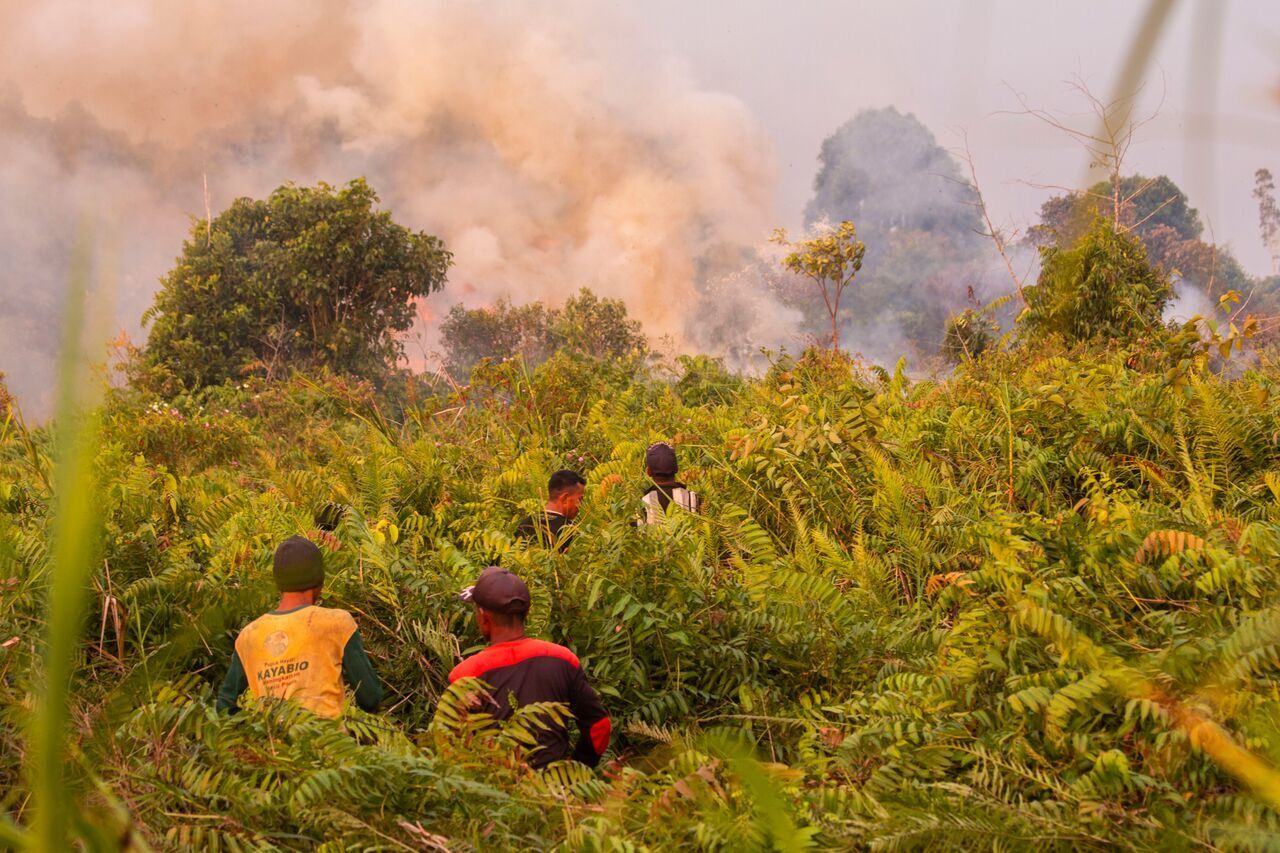 What is causing the fires this time? Again, palm oil plantations are suspect. According to a press release from Greenpeace, every year since 2013, the PT Sumatera Unggul Makmur (PT SUM) concession, which belongs to Gama, a palm oil company directly connected to the world’s largest palm oil trader, Wilmar, has burned. Fire hotspots have also been documented in concessions owned by Bumitama and First Resources, and all of these producers are palm oil suppliers (by way of palm oil traders) to major brands like Mondelēz, Nestlé, and Unilever.

Alan Knight OBE, IAR Chief Executive, stated: “If we want to save orangutans from extinction, we cannot let fires destroy their habitat and the habitat of so much other precious wildlife. Our team in West Borneo are risking their lives to protect orangutans both inside and outside our rehabilitation center – and we are calling on the public to help give them the tools they need to keep themselves and the animals safe.”

In a Facebook post, IAR makes a desperate plea for concerned people to help in their struggles, financially, but also in terms of spreading awareness, as they say their plight is being ignored by the press. PLEASE consider making a donation to IAR, which you can do here on their website. If you are unable to donate, then please SHARE this with your network to increase awareness and support for Borneo’s priceless habitats and their precious inhabitants!

These fires also obviously have a direct and lasting impact on the human inhabitants of Borneo, with lives disrupted, schools shutting down, eye and throat irritations being commonplace, and high rates of patients entering hospitals with respiratory ailments. Considering findings from a recent study that show air pollution is linked to decreased cognitive function, and it’s clear these fires are doing even more harm than we can see on the surface.

And to take even further action for orangutans — ditch palm oil! Found in around half of the items on supermarket shelves, in everything from snacks and baked goods to cosmetics and toiletries, palm oil is a modern day evil that is difficult to avoid, but it is entirely possible! Check this out for tips on how to eliminate the blood oil from your life.