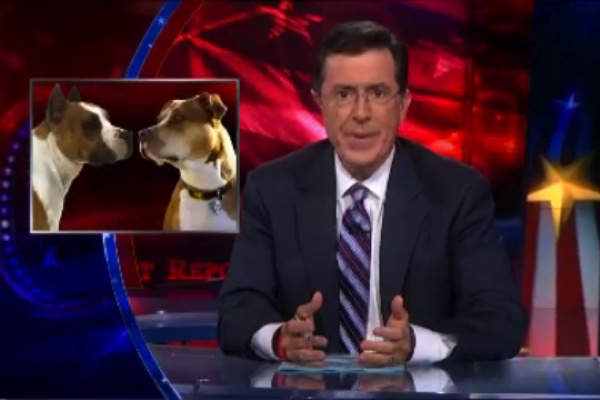 Representative Steve King (R-Iowa) recently spoke in defense of Americans who want to watch dogfighting. He reasoned: “If it’s not a federal crime to induce somebody to watch people fighting, there’s something wrong with the priorities of people [who think inducing someone to watch animals fighting is a crime].”

Where to begin on this faulty “reasoning?” Well, Steven Colbert took a shot, resulting in a pretty hilarious Colbert Show segment.

Colbert begins: “Now sadly, King’s words were twisted…he was savaged by the ‘We Don’t Enjoy Watching Animals Being Tortured Brigade’ over at the Humane Society. So Congressman King put his defense of dogfights in its true moral context.”

Colbert then plays King’s RIDICULOUS explanation of why we should not “raise animals above humans” (you have to hear it to believe it!)

Finally, Colbert quips: “The point is…humans do cruel things to each other; therefore, they must be allowed to to be cruel to animals. Until there is no human suffering, it’s olly olly oxen free on what you’re free to do to your oxen!”

And there’s so much more. Check out the video below for the whole hilarious clip.