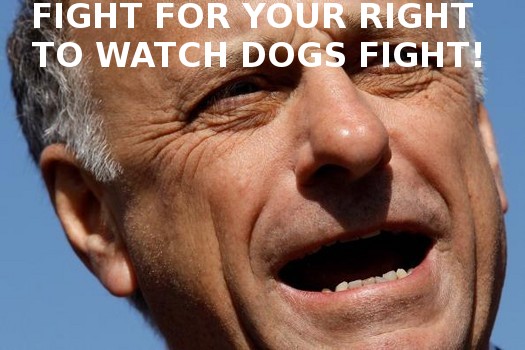 During a recent tele-townhall event, Rep. Steve King (R-Iowa) defended the rights of Americans who want to see animals such as dogs fighting against one another.

Rep. King took issue with an amendment to the Federal Farm Bill that would criminalize attending organized animal fights and would impose additional penalties on people who bring children to the events.

His reasoning can be summed up as follows: “If it’s not a federal crime to induce somebody to watch people fighting, there’s something wrong with the priorities of people [who think inducing someone to watch animals fighting is a crime].”

Hmmm…where do we begin Congressman King? People choose to fight (and get paid for it), but animals don’t get that choice. If you can’t comprehend that, there’s not only something wrong with your priorities, but also with your mind!

Watch the clip below, and try to stay calm (Warning: we found it hard to)