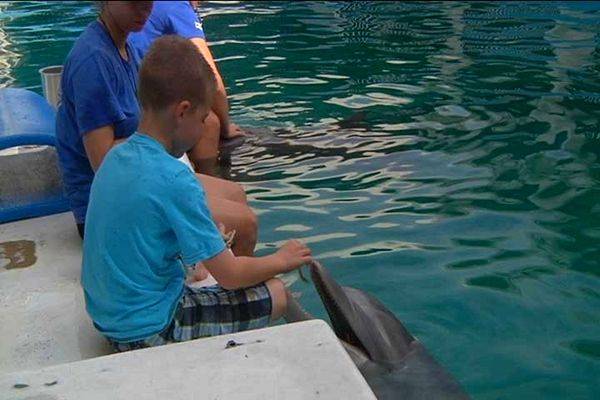 Damian, an eight-year-old boy has a rare condition called Proximal Femoral Focal Discrepancy, which caused his left leg to be shorter than his right. As a result, he has had to wear a prosthetic device on his left leg for most of his life.

Winter the dolphin was the inspiration for the film “Dolphin Tale.” She was rescued in December 2005  off the Florida coast and taken in by the Clearwater Marine Aquarium. Winter lost her tail after becoming entangled with a rope attached to a crab trap and was fitted with a prosthetic one.

Damian found out about Winter, the dolphin from a book in his school library. Since then Damian has loved and admired Winter; he sees her as an inspiration and is very attached to her and her story.

Damian is scheduled to have surgery in June to rotate his leg so that his ankle will work as a knee. He will be in a cast from the waist down for 6-8 weeks during the recovery and his family decided that taking a family vacation before the surgery, where Damian could see Winter was the absolutely best thing for him.

Watch the video his family filmed that shows the moment when Damian learned he will be meeting his idol, Winter the Dolphin below, followed by a video of the actual meeting.