The Purrfect Candidate: A Rescue Cat Runs for Senate! 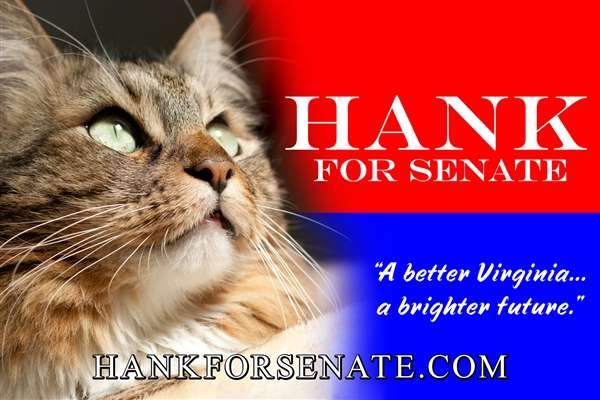 Recently, we’ve reported on the intelligence and communication skills of dolphins, but what about our more terrestrial mammal friends? A Virginia feline is showing some political savvy and throwing himself into the race for a senate seat. Well, his owner is throwing him into the race, but that doesn’t mean Hank isn’t ready to lead. According to his somewhat cheesy campaign site, Hank has all the good old boy chops that it takes to make a leader.

“From the very first day, Hank has been a fighter. Born to a single mother living on the streets, Hank, his mother, and his siblings were taken to an animal shelter and sat on death row. Shortly before their execution, Hank and the rest of his family were saved by an animal rescue group called Animal Allies. Hank was adapted to a loving family, and was raised by his adopted brother Sammy.

Being from the streets and having nothing, Hank learned the value of hard work. Putting himself through school while working, Hank was simply too stubborn and driven to let his disadvantages dictate his future. After graduating with honors, Hank quickly entered the business world and brought himself up to start and run a number of successful local companies.”

The Springfield resident who put his cat Hank into the contest remains anonymous, so we must go solely off of Hank’s listed credentials. His charm and tenacity make him sound like a candidate worth getting behind!