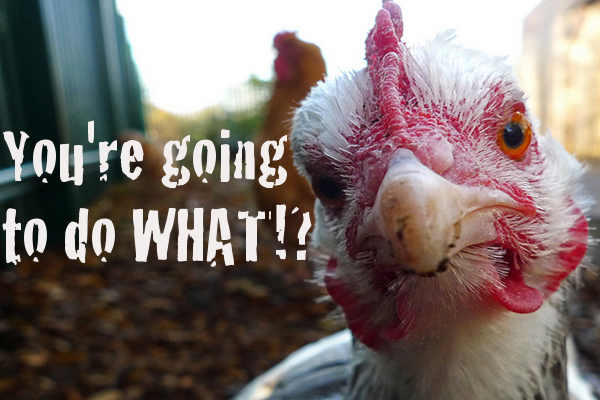 According to a new report on Wired UK, Architecture student André Ford has proposed a new system for the mass production of headless chickens (birds whose cerebral cortex has been removed), so that they can be produced in more densely packed conditions, without the associated distress.

Ford speculates that the system will help meet the rising demand for meat, particularly poultry, and improve the welfare of chickens! He envisions that the “desensitized” chickens could then be stacked in dozens of vertical frames in urban farms (yes, picture the human pods in The Matrix).

The horror doesn’t stop there… in order to tackle the lack of muscular stimulation in such an environment, he proposes using electric shocks on the chickens!

Ford claims the solution is no more shocking than existing food-production techniques. “The realities of the existing systems of production are just as shocking,” he told Wired.co.uk, “but they are hidden behind the sentimental guise of traditional farming scenes that we as consumers hold in our minds and see on our food packaging.”

Well, at least he got something right!

If you’re interested, you can view the spooky prototypes of Ford’s concept in in his “Unconscious Farming” Image Gallery.

Is this nightmare the “humane” and “sustainable” dream of animal agriculture that everyone keeps talking about? Do you think this will ever happen?