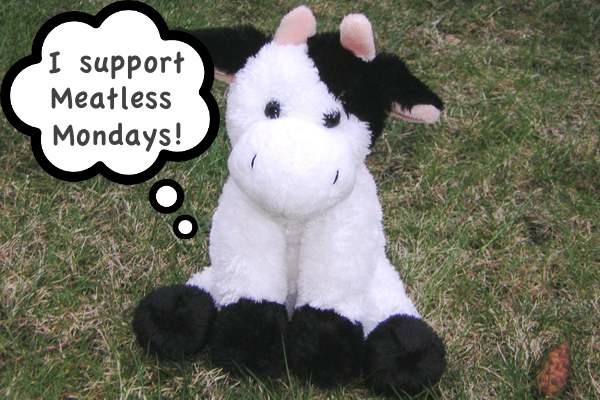 “One simple way to reduce your environmental impact while dining at our cafeterias is to participate in the “Meatless Monday” initiative…The production of meat, especially beef (and dairy as well), has a large environmental impact. According to the U.N., animal agriculture is a major source of greenhouse gases and climate change. It also wastes resources. It takes 7,000 kg of grain to make 1,000 kg of beef…[and] beef production requires a lot of water, fertilizer, fossil fuels, and pesticides. In addition there are many health concerns related to the excessive consumption of meat.”

Unsurprisingly, the meat industry took issue with the statement. Farmers and ranchers said they felt “attacked” and even “demonized.”

Politicians such as Sen. Chuck Grassley (R-Iowa), also piled on with statements like: “I will eat more meat on Monday to compensate for stupid USDA recommendation [about] a meatless Monday.”

Now, the USDA is claiming the department does not endorse Meatless Mondays, and that the statement was posted without proper clearance. It has since been removed.

Like many people, Peggy Nue, President of Monday Campaigns, Inc., was surprised at how quickly the USDA reversed their position. Nue was quoted: “It shouldn’t be considered a threatening idea. We’re not saying give up meat entirely — just one day a week.”

She also aptly noted: “There really is a conflict in their mission. On one hand, they represent the meat industry, and on the other, they’re putting out dietary guidelines to make America healthier.”

Harvard School of Public Health nutrition chair Walter Willett also pointed out the blatant “schizophrenia” within the department, citing the department’s concurrent promotion of products like beef and cheese and warnings about over-consumption of saturated fat and cholesterol.

But it’s pretty obvious who butters the USDA’s bread. The agency rescinded their endorsement of Meatless Mondays just hours after the National Cattlemen’s Beef Association denounced it.

How can we trust an agency that’s in bed with big beef and other meat and dairy giants to make sound recommendations for our health and nutrition? Well obviously we can’t!

It’s time to take our health into our own hands! Time to educate ourselves about the health benefits of a plant-based diet, the perils of processed meats (and all meat!), and the incredible array of tasty, nutritious, and satisfying vegan recipes and products that are now literally at our fingertips. There’s no time like the present to start making decisions that truly benefit our health as well as animals and the planet.

P.S. – tell Senator Grassley what you think about his plan to boost meat consumption HERE.