What the WHAT? New Study Recommends Eating Donuts for Breakfast to Lose Weight! 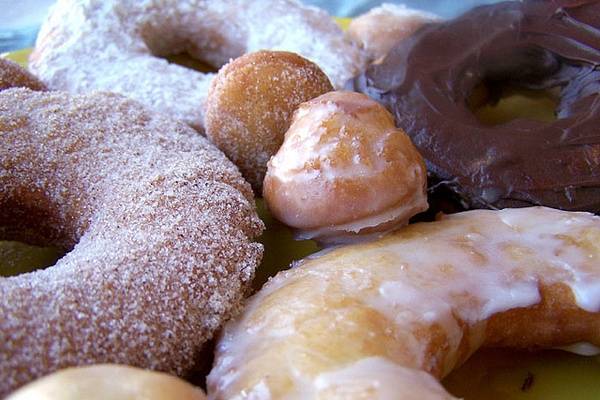 For the study, researchers recruited 200 nondiabetic obese adult volunteers, who were then randomly assigned to one of two diet groups. The diet plans were identical except for breakfast. One group consumed a 600-calorie breakfast including a protein source and their choice of a sweet, high carbohydrate food, such as a cookie, chocolate, cake, or a doughnut. The other group consumed a high-protein, low-carbohydrate, 300 calorie breakfast.

During the first 16 weeks of the study, both groups lost the same amount of weight – about 33 pounds on average. But surprisingly, during the final 16 weeks of the diet (considered the follow-up period), those in the low-carb breakfast group had regained an average of 22 pounds, while the “dessert for breakfast” group went on to lose an additional 15 pounds!

The dessert group also reported feeling less hunger and fewer cravings during the diet than the other participants, and their food diaries showed they were also better at sticking to their daily calorie limits. The study’s lead author believes this was an important key to their weight loss success, noting: “The goal of a weight loss diet should be not only weight reduction but also reduction of hunger and cravings, thus helping prevent weight regain.”

Researchers believe the “dessert” group’s success lies in the timing and composition of their meals. Consuming a diet with a protein and carbohydrate source helps reduce hunger, improve satiety, and cut down on cravings. The study’s lead author explained that allowing yourself treats while dieting is important to keep you satisfied and prevent binges.

It’s also important to note that both groups were on a relatively low-calorie diet – 1,400 calories per day for women and 1,600 calories per day. Sticking to an appropriate calorie range (based on various genetic factors and activity level) is necessary for weight loss as well as long-term weight maintenance.

Furthermore, as many nutritionists are rightfully pointing out, eating nutrient-poor, calorie-dense foods every day for breakfast (with or without a protein source) is not recommended for optimal health. It is important to focus on diet quality to banish cravings and get the most bang for your calorie buck.

So indulge in those treats occasionally, but be sure to favor nutrient-dense carbohydrates and healthy plant-based protein sources for your daily breakfast routine!

Image Credit: Back to the Cutting Board/Flickr