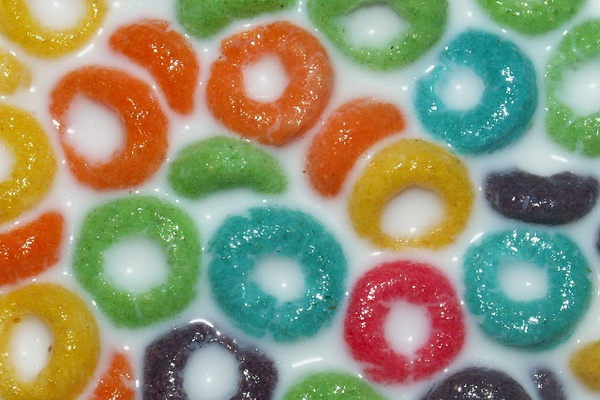 A new report by the Yale Rudd Center for Food Policy and Obesity turned up some interesting results about the healthfulness and marketing of kids’ cereals.

The Children’s Food and Beverage Advertising Initiative was launched in 2006 to “shift the mix of advertising primarily directed to children to encourage healthier dietary choices and healthy lifestyles.” With the launch of initiative, major cereal companies including Kellogg, Post, and General Mills pledged to improve the nutritional quality of their children’s cereals and develop stricter standards for child-directed advertising.

Yale issued their first Cereal FACTS report in 2009, concluding that the least healthy breakfast cereals were most aggressively marketed to young children. The just-released 2012 report sought to determine how the nutritional profiles and advertising practices of major cereal companies have changed over the past three years.

The 2012 report found that while many companies have significantly improved the nutritional quality of cereals marketed to children, they are also more heavily targeting children in the advertising of many of their least nutritious products. Key findings include:

So although there have been some positive changes in the nutritional profile of some cereal brands, cereals marketed to children are still far less healthy than those marketed to adults. “They have 56% more sugar, half as much fiber, and 50% more sodium,” noted co-author Marlene Schwartz, deputy director of the Rudd Center.

The study’s lead researcher added: “Children still get one spoonful of sugar in every three spoonfuls of cereal. These products are not nutritious options that children should consume every day.”

The report recommends watching out for a handful of cereals, including Pebbles, Reese’s Puffs, Cinnamon Toast Crunch, Lucky Charms and Trix. These cereals have the poorest nutrition ratings and are some of the most frequently marketed to children.

For more information, and to read the report in its entirety, visit www.cerealfacts.org.