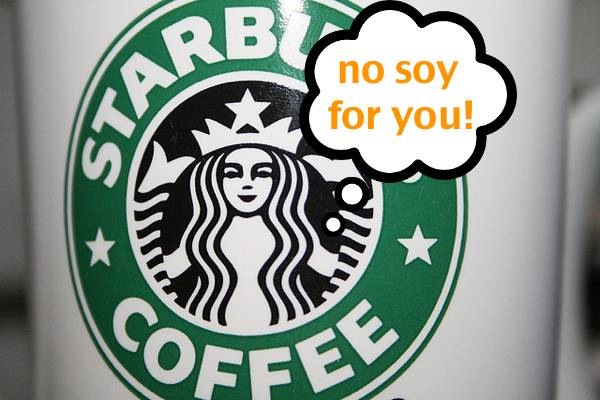 Last week, Starbucks announced that it’s planning to make several changes to its My Starbucks Rewards program…and it’s creating quite a buzz among some customers.

The company is, of course, touting the changes to the program as positive, noting: My Starbucks Rewards are coming to you faster (and tastier!). Rewards benefits will now be available on smart phones, can be redeemed for food (not just drinks), and can be cashed in after accumulating 12 instead of 15 stars.

But it’s what they’re taking away that has some customers outraged. Beginning October 16, 2012, the coffee giant will no longer offer soy milk and syrups as part of their rewards program.

Chris Hansen, founder of No Sleep Records (and long-time vegan), has started a petition against Starbucks’ policy change. Hansen was quoted: “A lot of vegans and lactose intolerant people are upset by this. It feels like we’re being penalized because of our beliefs or because of the way our bodies work.”

This isn’t the first time this year that Starbucks has made headlines among vegans and health-conscious consumers. In March, Starbucks opened a vegan-friendly juice bar near Seattle, featuring quinoa and kale dishes in addition to their fresh fruit and vegetable juice offerings.

And soon after (in April), Starbucks pledged to stop using cochineal extract – a red food coloring derived from crushed bugs – in several of their products in response to vocal opposition from vegetarians and vegans.

Consumers really can make a difference, but only if they speak up! Visit www.change.org to sign Chris Hansen’s petition to bring back soy milk and syrups as Rewards options for Gold Card members.