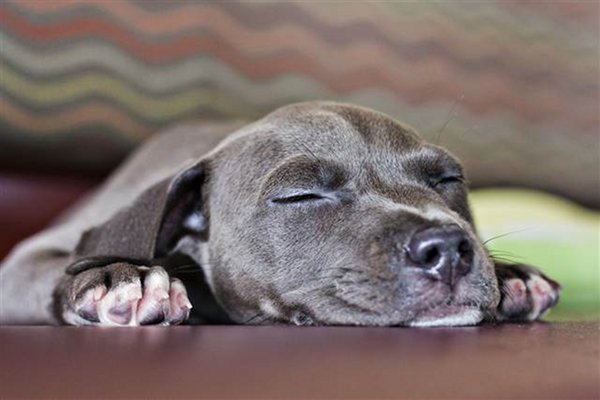 We’ve previously reported on Harper, a pit bull pup, who was found deformed in a trash bag. Erica Daniel, the woman who found her, initially thought she may have to put Harper down because of her debilitating injuries. After a bit of massaging, Ms. Daniel saw some improvement in Harper and eventually discovered that Harper wasn’t as unhealthy as they had previously thought.

Six months have passed since Harper was found and we are glad to report that she’s doing better than anyone could have expected. Daniels told MSNBC, “There’s literally nothing wrong with her now!”

Daniel had initially planned to offer Harper up for adoption, but after everything they went through, she couldn’t bear to give Harper up. Now, Daniel and Harper are an inseparable team and can be seen together at public appearances and volunteer events.

The publicity has resulted in generous donations for Daniel’s year-old pit-bull-rescue organization, Dolly’s Foundation and landed her a book deal! Dolly’s Foundation is a rescue and rehabilitation center that gets its name from another one of Erica’s rescued dogs. They work to care for and find homes for pit bulls and other bully breed dogs.

Don’t let the extra animals fool you though, Harper is still being pampered by her owners. “She’s our baby!” said Daniel. “She still loves it when we hold her like a little baby. My husband holds her like that all the time on his recliner.”

This story is a reminder of what a good home and love can do for an animal. I don’t like to use the word miracle, even though many would say it applies. The reality is that a miracle wasn’t even needed….just one person with a kind heart.