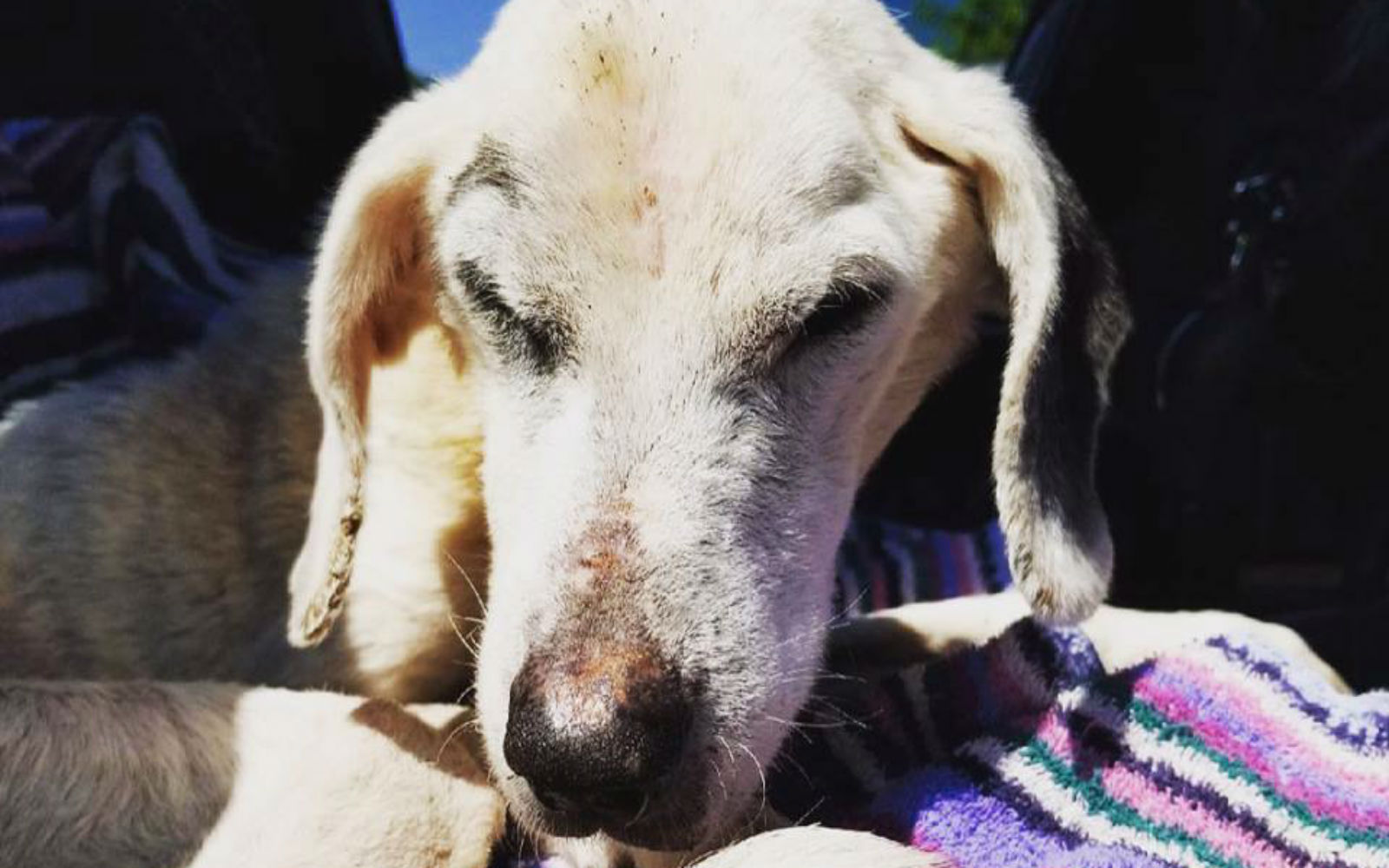 Last year, Two Tailz Rescue shared a story about a poor little girl named Fern in desperate need of a good feeding and a lot of love!

Animal control saved Fern from dying on a creek bed with a 30 foot drop-off, where she had gotten stuck and was unable to move. It is thought she might have been trapped there for up to two weeks. If it hadn’t been for a kind passerby who heard her whimpers and called animal control, Fern might not have survived another night.

Two Tailz Rescue immediately got involved, arranging for Fern to be taken to a vet for urgent medical care and fostering. She wasn’t able to be boarded because of the poor state she was in. 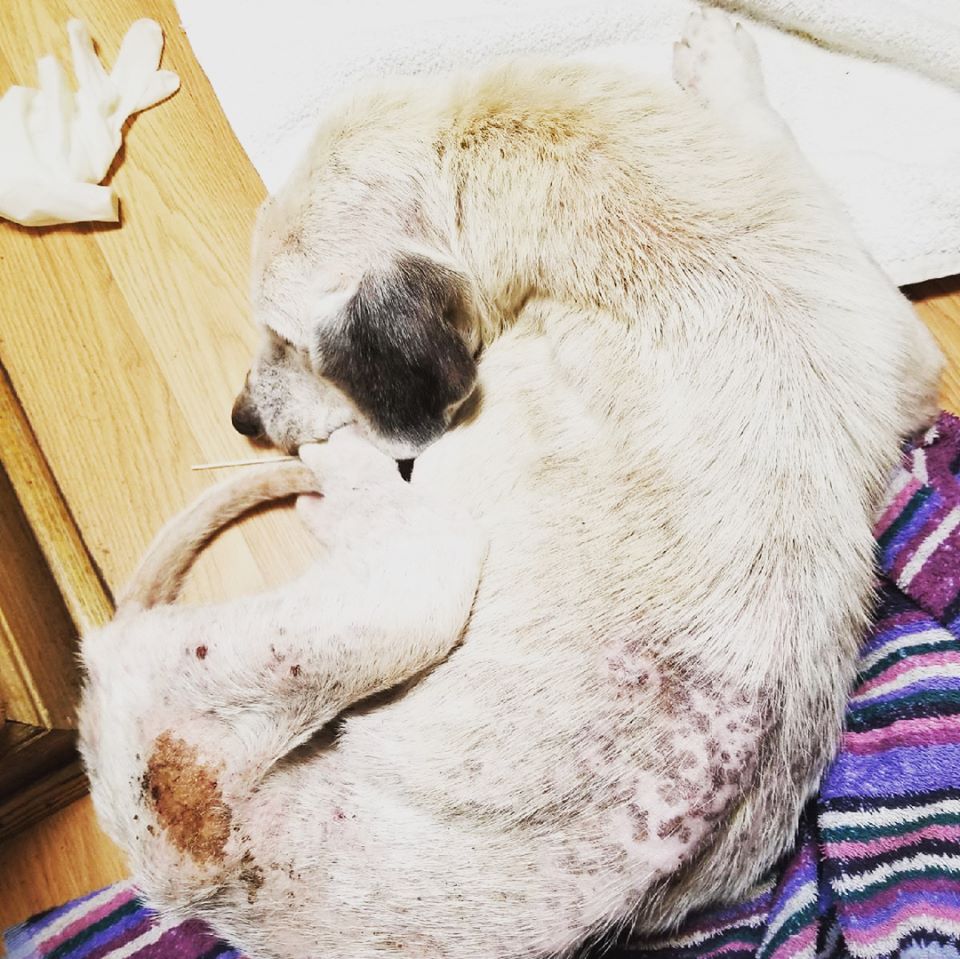 Fern was thought to be around six or seven years old. She is incredibly underweight at just 20 pounds when she should ideally be between 40 and 45. 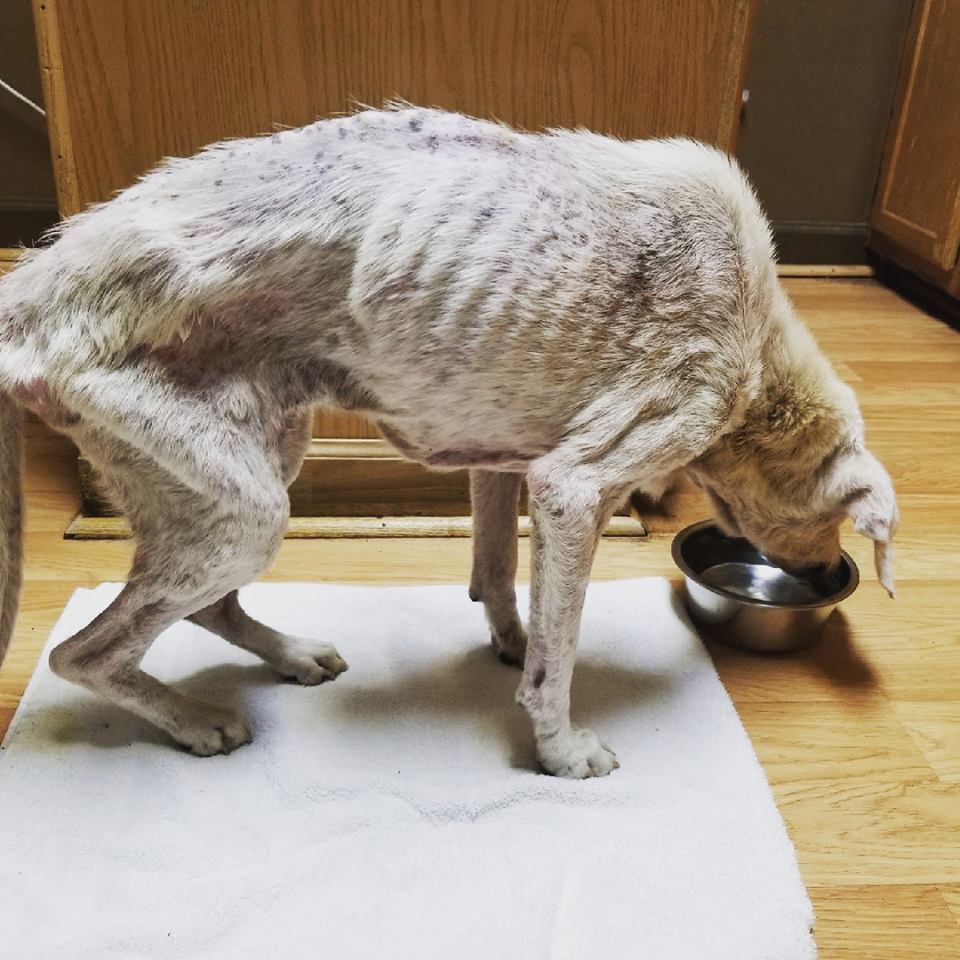 Fern was so malnourished she can barely stand. The first words said by Fern’s rescuer were that “the pictures do not do her condition justice … she must have rescue immediately to live.” 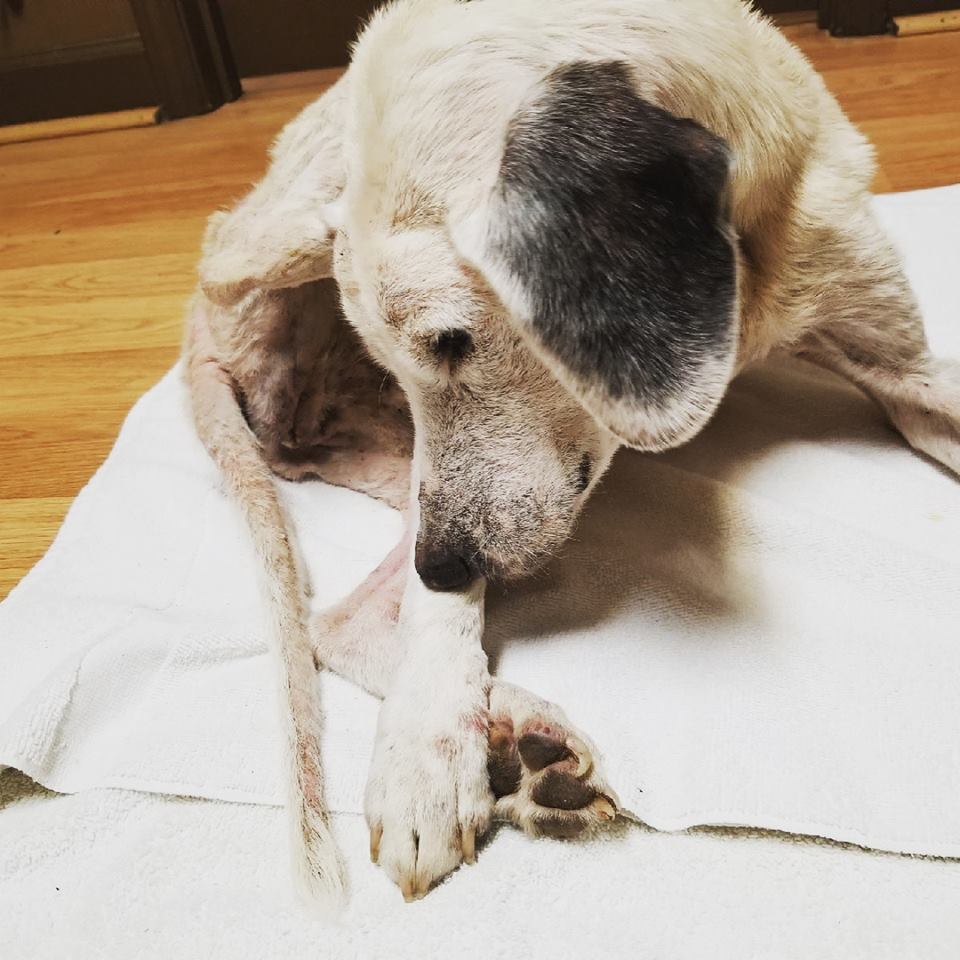 Fern’s check-up revealed she had a bacterial infection as well as other skin infections, along with ticks. Her skin was also covered in both blisters and dermatitis. Fern also had ear infections and was incredibly anemic, dehydrated, and emaciated. She received a comprehensive blood test to determine if there was anything else this poor little girl is suffering from. We are pleased to report that Fern was stable. 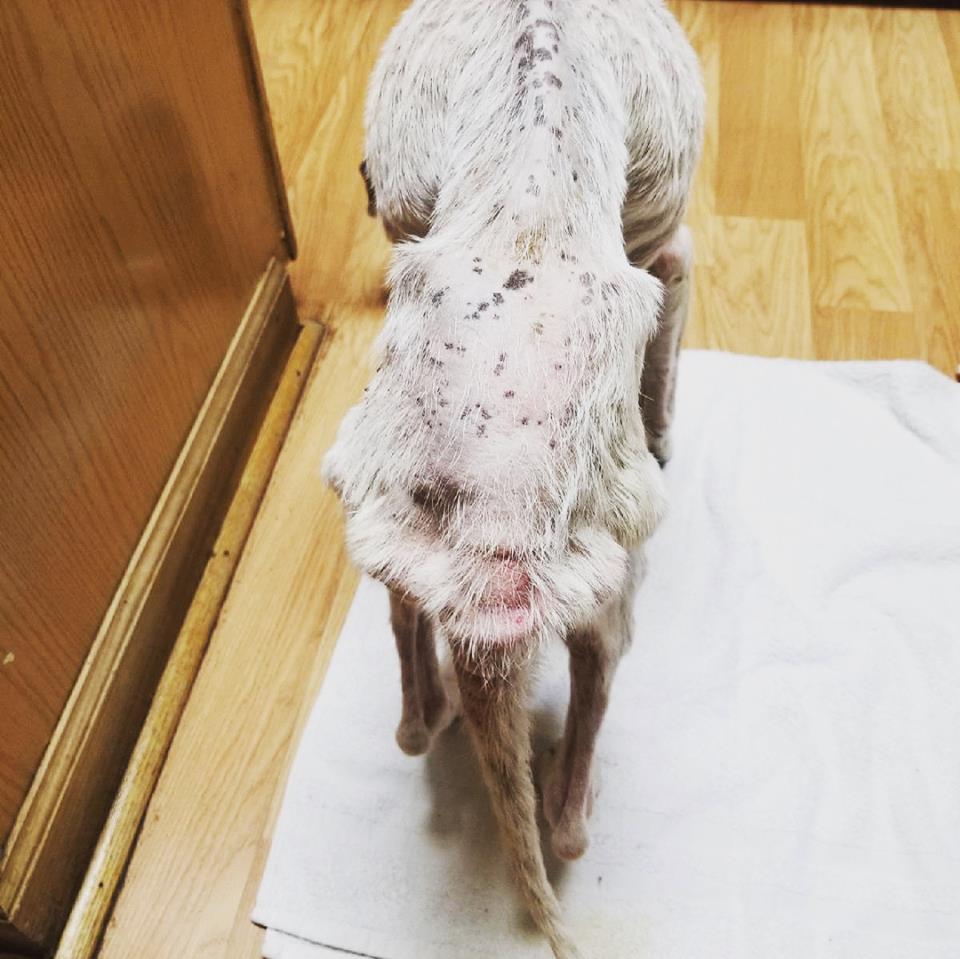 To help her recover, Fern was put on IV fluids and antibiotics, had a deworming treatment, and was given a medicated bath, along with anti-itch and pain meds to keep her comfortable. Fern was thoroughly exhausted and weak, but she is a little fighter, and even managed to wag her tail in thanks a couple of times for all the people taking care of her, like this kind volunteer here! 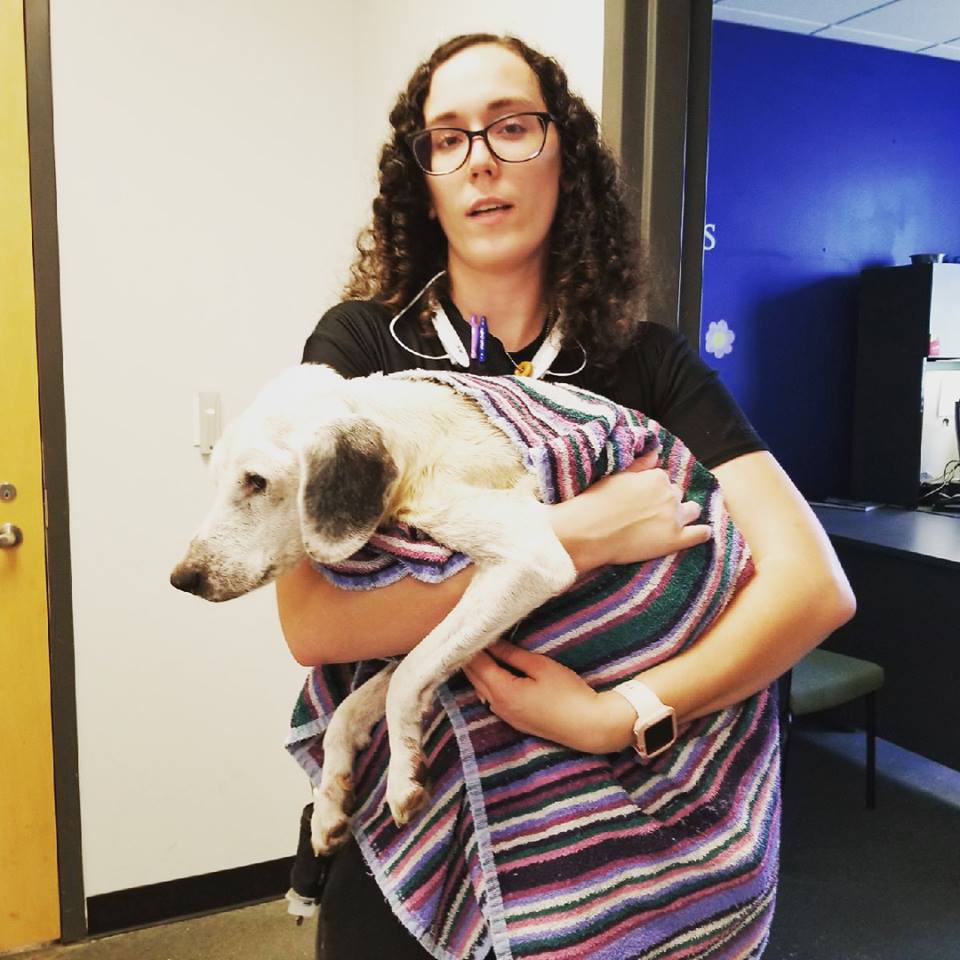 You are so brave, Fern! 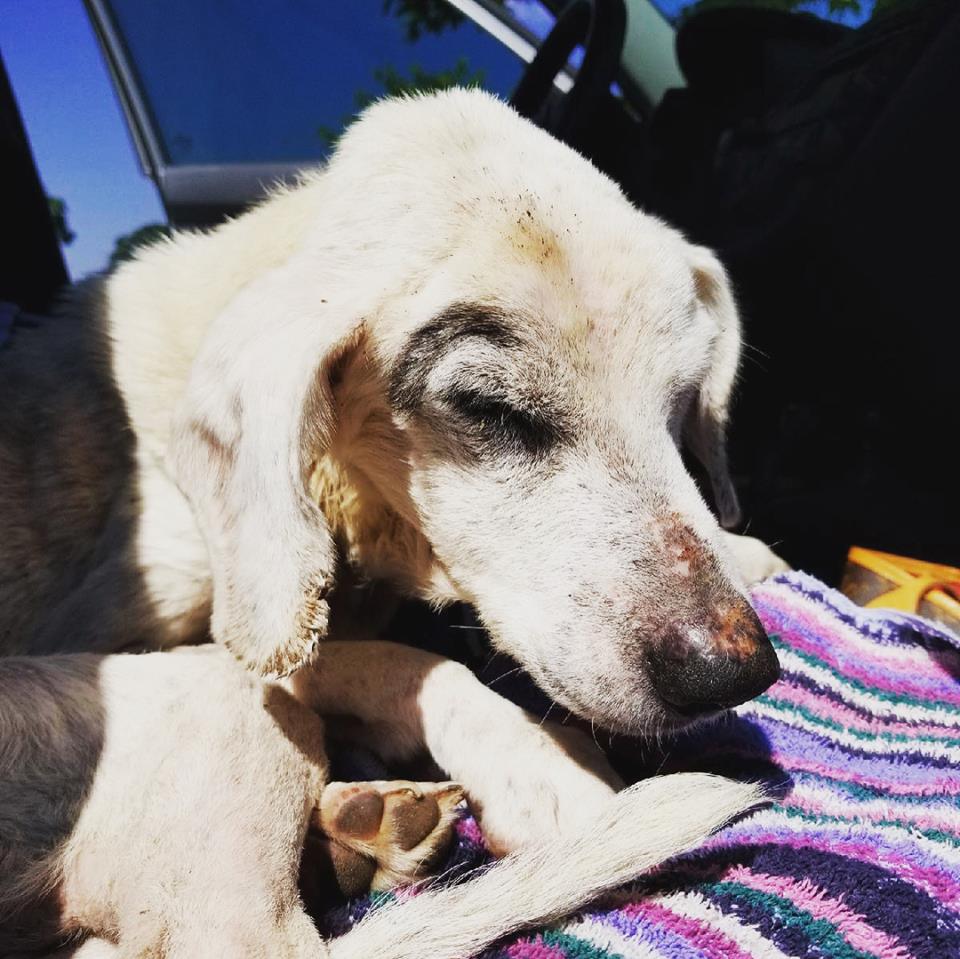 We are always inspired to hear stories like Fern’s, knowing that the ordeal these poor animals have been through is firmly behind them, and what they have to look forward to now is a future full of love and affection. Dogs who have been so close to death and are then rescued just in time go on to be the most loving members of our families. We can’t wait to hear about Fern in her future family!

Two Tailz Rescue is dedicated to rescuing, rehabilitating, and rehoming homeless, abused, and neglected dogs. If you are in a position to foster Fern or donate towards her medical care, or would like to know more about their vital work, please visit their Facebook page.