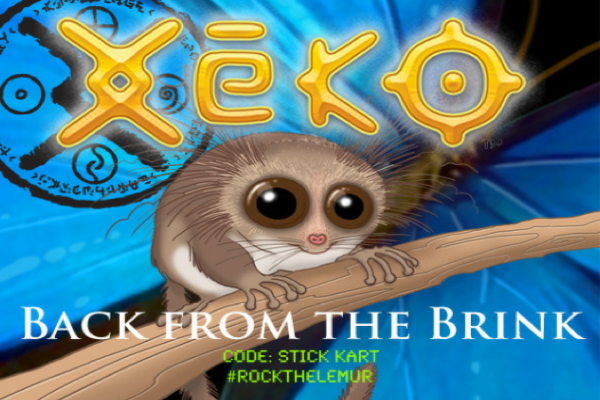 In this modern fast-paced world, we are continuously connected to technology. Imagine taking a break to explore precious endangered species and biodiversity without actually unplugging your electronics?

Software developer Oomba is doing just that by bringing their award winning board game, Xeko, to mobile and social gaming platforms. Winner of Creative Toy Game of the Year, Xeko is a collectable card game Oomba launched in celebration of International Biodiversity Day last month through a Kickstarter campaign. Donors, known as Xeko Backer Agents, can contribute the campaign in amounts that represent the need for action and awareness: $30 symbolizes that 30% of amphibian species are threatened, pledging $1300 denotes that less than 1,300 Bengal Tigers are known to exist.

We spoke with Xeko inventor and environmental activist Amy Tucker to get more insight into this unique game and how it will raise awareness for the treasured animals that are threatened by endangerment.

One Green Planet: Explain how Xeko engages players and helps save endangered species?

Amy Tucker: Xeko helps save endangered species via awareness, community action, and funding. Instead of imaginary creatures, Xeko cards feature real-world endangered animals from different conservation hotspots. This creates awareness and appreciation for these creatures and their homes, as well as a world-view and our interconnectedness. At the end of the day, we are all playing for Team Earth, and you can’t take part in something unless you know about it.

Xeko also believes in community action, encouraging players to get out and get involved with conservation efforts in the real world. Xeko’s Green Stars program recognizes players for different activities in their communities such as recycling, tree planting, trash pickup, and volunteering.

OGP: Players have the opportunity to pledge donations to the campaign. Describe the programs that save different species from funding pledged through Xeko’s Kictstarter campaign?

AT: In regards to funding, one percent (1%) of Xeko revenues will be contributed to Gaming for Good. While still in early stages, Gaming for Good (G4G) will be open to the game industry at large. Players from participating games allocate points towards G4G-approved non-profits relating to education, animals and the earth. G4G’s first non-profit partner is WeForest.org and conversations are in progress with several other NPs in education, conservation, and animal rescue categories. More games = more funding = more good!

OGP: Xeko is on a timed deadline to meet a fundraising goal of $250,000 by July 22. What happens next as you strive to reach your goal, and what are the alternatives in case it’s not met?

AT: Kickstarter is an all or nothing model — if you meet your goal, then you get funded. If you don’t hit the goal, you get nothing. We’re very focused on hitting the goal and are off to a great start! We’ve added a few stretch goals and would really like to surpass them.

We need people to jump in now to help this project succeed. This is also a chance to show the game and entertainment industries that people actually want positive content and games other than first-person shooters. The success of this project will show that games that are on a mission to make a positive impact can be well received.

Let’s make this a blockbuster and maybe more games like Xeko will be created. There’s simply not enough choice in today’s mainstream media. We see a huge opportunity for “organic content” — content that’s high quality, inspiring, and super gratifying.

Click here to read more about Xeko’s Kickstarter campaign, the amazing prizes offered to each donor, and how you can help support their mission!