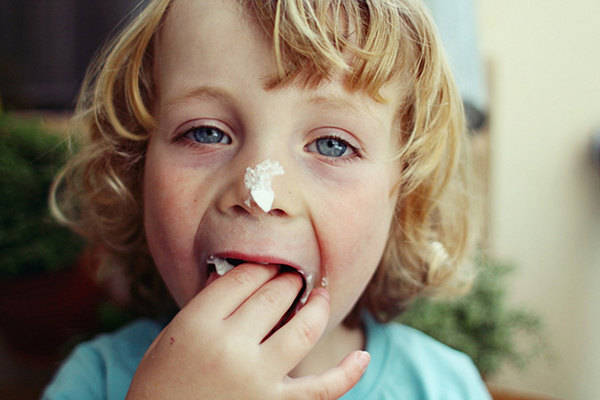 Soybeans received a great deal in of attention in the United States during World War II when they were promoted as a low-cost, highly nutritious food.  One vintage book on my shelf, The Useful Soybean, provides suggestions for introducing these “dietary gems” to the family.  Ideas include waiting to tell the family soy is in a dish until they’ve asked for seconds (or thirds), serving “crisp homemade soy cookies,” and keeping soy ingredients a secret.

Fast-forward almost 70 years.  Soy products are accepted as highly nutritious foods.  Grocery shelves and freezer cases feature mock meats, frozen desserts, milks, yogurt, and many other foods, all based on soy.  Soy foods are important parts of the diets of many vegetarians and vegans.

For children, soy foods offer many benefits.  Some of these are due to soy’s nutritional profile.  Soy foods are an excellent source of protein and essential amino acids; they are also low in saturated fat, free of cholesterol, and high in unsaturated fat. Soy products like soy milk and some brands of tofu are often fortified with calcium, vitamin D, and vitamin B12; mock meats may be fortified with iron, zinc, and vitamin B12.

Using soy products during childhood and adolescence may offer life-long health benefits.  Some studies show that eating soy products at least once a day in childhood markedly reduces the risk of breast cancer in adulthood.

Additionally, soy products can be convenient to prepare and can add variety to a healthy child’s diet. And for children who want to fit in, veggie “bologna” sandwiches and tofu “hot dogs” can make the lunchbox look like that of peers’.

Concerns about the safety of soy for children appear to be unfounded.  There is really no scientific support for claims like soy having a feminizing effect or disrupting hormones.  We can look at infants fed soy formula who have the highest intake of isoflavones (plant estrogens) from soy per pound of body weight during the time that soy formula is a major part of their diet.  Follow-up studies of adults given soy formula in infancy find no effects on fertility, maturation, or miscarriage rates.  Soy foods and isoflavones do not affect testosterone levels or sperm count.

There is one concern with soy, however, as illustrated by this menu planned for a 5-year old vegan by a (non-veg) dietetics student.

What’s wrong with it?  Variety is lacking.  If we were to replace every serving of soy with a hamburger, a carrot, or with a glass of cow’s milk, it would still be a problematic menu.  There’s just too much of one food.  What can be done to add variety?  Try replacing lunch’s yogurt with beans – a hummus dip or a bean burrito.  Instead of a soy-based dessert, try a wedge of watermelon or a scoop of apple crisp.  Even breakfast’s veg sausage could be replaced with hashed browns or a piece of fruit.  All of these changes will add variety and reduce the hyper-focus on soy.  It’s not that there is anything inherently wrong with soy – it’s just too much of a good thing in a menu like this.

Media hype and soy critics have raised questions soy’s safety, leading parents to wonder whether or not soy should be a part of their children’s diet.  The short answer – soy appears to be safe to use and can add variety.  Yes, soy can be overused and this is problematic if it is leading to a lack of dietary variety.  But, soy in and of itself is an acceptable food for children (of course children with a soy allergy should avoid products containing soy).