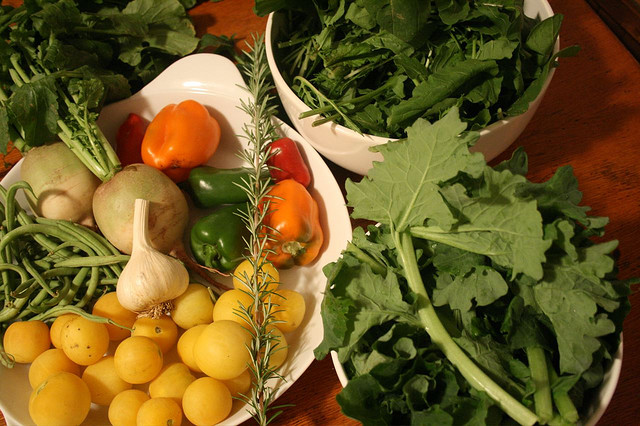 Among the issues that are frequently raised regarding the "safety" of vegan diets is one that focuses on fat-soluble vitamins. Some of the concerns are based on legitimate questions about active forms of these vitamins and their absorption from plant foods, and others aren’t."> Fat Soluble Vitamins: Do They Stand Between Vegans and Health? - One Green Planet
Food Monster App Tiny Rescue Shop Newsletter Support Us Cookbooks Petitions

Fat Soluble Vitamins: Do They Stand Between Vegans and Health?

Among the issues that are frequently raised regarding the “safety” of vegan diets is one that focuses on fat-soluble vitamins. Some of the concerns are based on legitimate questions about active forms of these vitamins and their absorption from plant foods, and others aren’t. Regardless of those questions, though, plant foods can and do provide enough of the fat soluble vitamins A, D and K. (Vitamin E, which is also fat-soluble, is not involved in the controversy since it’s found in a very wide variety of foods.)

Vitamin A: It’s true that the preformed active type of this vitamin is found only in animal foods. But plants are abundant in vitamin A precursors like beta-carotene. In fact, these provitamin A compounds are important enough that the USDA measures vitamin A content of foods as “retinol activity equivalents (RAE),” which includes both preformed vitamin A and the compounds that the body turns into vitamin A. There is no separate RDA or recommendation for animal-derived pre-formed vitamin A.

You can meet your vitamin A requirement for the day by drinking just one-quarter cup of carrot juice or eating a cup of kale or spinach. Other foods that make significant contributions are sweet potatoes, cantaloupe, and dark orange winter squashes, including pumpkin. A word of caution though: Earlier assessments of retinol activity equivalents in plant foods over-estimated amounts. This is because more recent data show that conversion rates of the vitamin A precursors are lower than previously believed.

As a result, vitamin A is a nutrient that deserves some attention in vegan diets. This doesn’t mean you can’t get enough; it does mean that it’s a good idea to make sure you eat vitamin A rich foods every day.

Vitamin D: This vitamin occurs naturally in only a few foods—fatty fish, eggs from chickens who were fed vitamin D, and mushrooms treated with ultraviolet light. With such limited dietary availability, humans wouldn’t have gotten very far if not for the fact that we can make all the vitamin D we need when skin is exposed to sunlight. As humans have moved farther from equatorial zones—and spend less time outdoors—it’s become harder to make enough, though, so vitamin D-fortified foods have become important.

Although people can get adequate vitamin D from fatty fish, most—omnivore or not—rely on fortified foods and sun exposure, two options that are as easily available to vegans as to omnivores.

The vegan form of vitamin D, which is called ergocalciferol or vitamin D2, has been shown to be as effective in raising blood levels of this nutrient as animal-derived vitamin D3 when it’s taken at a usual daily dose. (The RDA is 600 IUs; some experts recommend 1,000.) At megadoses, however, vitamin D2 may need to be taken more often. But no one should be megadosing on vitamin D unless they are working with a doctor to correct a deficiency. And vitamin D2 has been used to effectively raise blood levels in people with deficiencies.

Vitamin K: Best sources of this nutrient are leafy green vegetables and canola, soy and olive oils. One form of vitamin K, called vitamin K2 or menaquinone, is found in animal products but in only one lone plant food—natto, a fermented soy product that isn’t a usual part of most western vegan diets. This isn’t a problem, though, because humans have no requirement for vitamin K2. We also have bacteria in our gut that produce this form of vitamin K—so we’re covered either way. Since vitamin K is essential for blood clotting we’d see some evidence of a deficiency if vegans weren’t getting enough. But a study that compared clotting rates between vegans and meat eaters found no difference.

Getting Enough of the Fat Soluble Vitamins: The best way to make sure you’re getting adequate amounts of the fat soluble vitamins is to eat plenty of leafy green and dark orange vegetables and to take a vitamin D supplement if you don’t get adequate sun exposure. Gentle cooking improves the absorption of some vitamin A precursors, and cooking foods in small amounts of olive or canola oil can give you a vitamin boost while improving absorption of these vitamins.