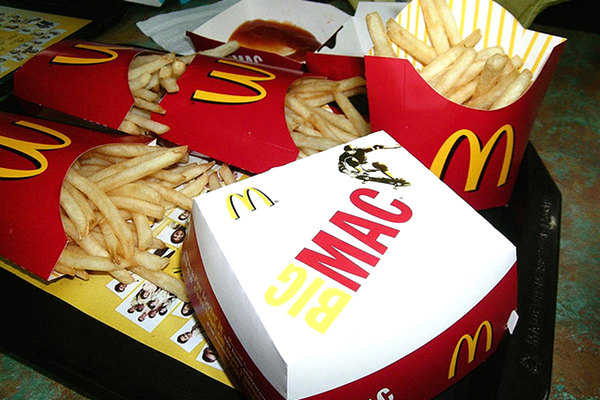 McDonald’s, Wendy’s, KFC, Burger King, Denny’s, Olive Garden, Dunkin’ Donuts, Subway, Red Lobster, and even Applebee’s and Friday’s are all leaping on the bandwagon of fresh and wholesome. They all promise you quality food at affordable prices. Some even have “less than 500 calorie” menu items.

We see commercials with fit, happy people eating these foods. Subway has created a folk hero out of Jared Fogle, who lost more than 200 pounds eating only at their restaurants. How did he do it? No breakfast, a 6-inch turkey sub with baked chips for lunch and a 12-inch veggie sub, topped with nothing on it for dinner, plus diet soda and water throughout the day. His under-one-thousand-calories-a-day approach worked because he cut back so dramatically on his caloric intake, not so much because he chose Subway and “ate fresh,” as the ads would have you believe.

Most of the ready-to-eat food we purchase, whether in a restaurant or in a package is compromised in quality. There is no way that superior-quality foods can be created and then sold at a cheap price. Do the math: If you bought all the ingredients to make a Big Mac at home, you would spend a lot more than the current retail price of $3.99 (even if you could get all the ingredients). You’d need access to a chemistry lab to truly duplicate your favorite burger.

The Anatomy of a Big Mac

Pasteurized Process American Cheese: According to our friends at Wikipedia: “Today’s American cheese is generally no longer made from a blend of other cheeses, but instead is manufactured from a set of ingredients such as milk, whey, milk fat, milk protein concentrate, whey protein concentrate, and salt. In many jurisdictions, it does not meet the legal definition of cheese and must be labeled as “cheese analogue,” “cheese product,” processed cheese, or similar.

Pickles: It is hard to say how these are made. But there isn’t much nutritional value to them to make a lot of difference.

Lettuce and onion: perhaps not organic but these seem closest to what Mother Nature intended as we are likely to get.

More to Your McNugget Than Chicken?

The Chicken McNugget is fed to our kids daily by the millions. It’s a rare mother who has not given in and ordered these for her children because “they like them” and anyhow, “they’re real chicken.” Well, that’s what McDonald’s would have you believe.

While there is, in fact, chicken in McNuggets, how much is up for debate. Their marketing says that McNuggets contain “100 percent chicken” and that’s true, technically. They do contain chicken and what chicken they contain is, in fact, real chicken.

They leave out the fact that 56 percent of these little pieces of deep fried . . . something . . . is corn. In The Omnivore’s Dilemma, Michael Pollan cites McDonald’s own brochure, “A Full Serving of Nutrition Facts: Choose the Best Meal for You,” when he writes “The ingredients listed in the flyer suggests a lot of thought goes into a nugget, that and a lot of corn. Of the thirty-eight ingredients it takes to make a McNugget, I counted thirteen that can be derived from corn: the corn-fed chicken itself; modified cornstarch (to bind the pulverized chicken meat); mono-, tri-, and diglycerides (emulsifiers, which keep the fats and water from separating); dextrose; lecithin (another emulsifier); chicken broth (to restore some of the flavor that processing leeches out); yellow corn flour and more modified cornstarch (for the batter); cornstarch (a filler); vegetable shortening; partially hydrogenated corn oil; and citric acid as a preservative. A couple of other plants take part in the nugget: There’s some wheat in the batter, and on any given day the hydrogenated oil could come from soybeans, canola, or cotton rather than corn, depending on the market price and availability.”

Pollan goes on to summarize the “quasi-edible substances” in McNuggets that ultimately come not from a corn or soybean field but from a petroleum refinery or chemical plant. These chemicals are what make modern processed food possible, by keeping the organic materials in them from going bad or looking strange after months in the freezer or on the road and include leavening agents and synthetic antioxidants to keep the various animal and vegetable fats involved in a nugget from turning rancid. Then there are anti-foaming agents like dimethylpolysiloxane , added to the cooking oil. According to the Handbook of Food Additives, dimethylpolysiloxane is a suspected carcinogen and an established mutagen, tumorigen, and reproductive effector; it’s also flammable.

But the real kicker in a Chicken McNugget is tertiary butylhydroquinone, or TBHQ, an antioxidant derived from petroleum that is either sprayed directly on the nugget or the inside of the box it comes in to “help preserve freshness.” According to A Consumer’s Dictionary of Food Additives, TBHQ is a form of butane (i.e., lighter fluid) the FDA allows processors to use sparingly in our food: It can comprise no more than 0.02 percent of the oil in a nugget. And it’s a good thing, too, since ingesting a single gram of TBHQ can cause “nausea, vomiting, ringing in the ears, delirium, a sense of suffocation, and collapse. Ingesting five grams of TBHQ can kill.”

But there is 100 percent chicken in them, too. Counts for something, right?