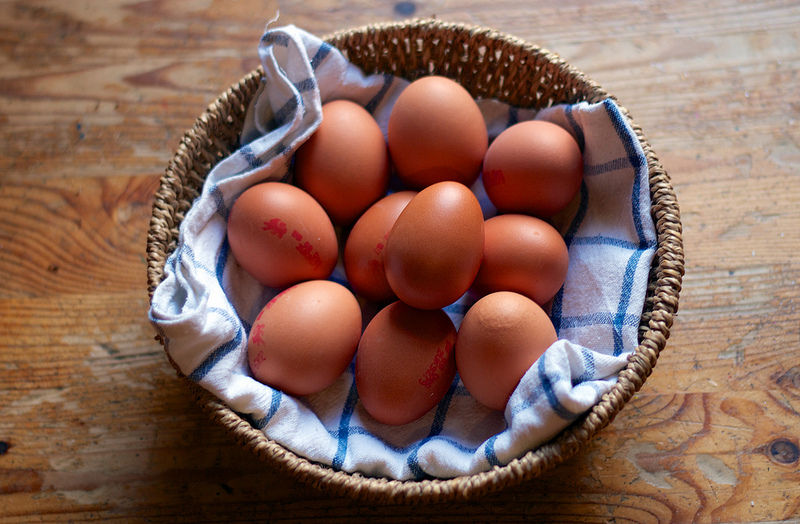 Right now, there are more than two million men in the U.S. living with prostate cancer. Even though that means that for every 50 men in this country 1 of them is living with prostate cancer, it is, of course, better than dying from it. If prostate cancer is caught early when it’s localized, the man’s 5-year survival is practically guaranteed—he has nearly 100% chance of being alive for at least five years after diagnosis.But once the cancer really starts spreading the man’s chances of living even 5 more years drop to 1 in 3.

So Harvard researchers decided to look into what makes prostate cancer spread. They took more than a thousand men with early stage prostate cancer and followed them for a couple years to see if there was anything in their diet associated with cancer progression, to see what made it go into the bones, for example.  What they found is remarkable, if not outright astonishing.

Men who eat a single egg – or even slightly less – a day may double their risk of cancer progression compared to men who hardly ever eat eggs. That means if a man is eating even a single egg a day (and who only has one egg?!), the chances of his prostate cancer metastasizing may be doubled.  Forget about scrambled or fried eggs for breakfast alone, there are at least a few eggs thrown into a daily menu selection of muffins, salad dressings, sauces, and desserts. Eggs are ubiquitous if you’re eating the Standard American Diet (SAD), so that single egg a day is (all too) easy to come by.

Why would less than one-a-day egg consumption double the risk of cancer progression? The researchers suggest it may be the choline, a naturally occurring compound found predominantly in eggs, poultry, liver, milk, and fish, which has been associated with getting (triggering) prostate cancer in the first place. But here’s the other strike against eggs (and it’s a big one):  not only may the choline in them spread prostate cancer, but it can also turn the cancer lethal.

The Harvard researchers suggest that maybe choline is the reason some studies have found a relationship between advanced prostate cancer and meat, milk, and egg consumption (there’s a good bit of choline in all those foods). They note that choline so concentrates inside prostate cancer cells that oncologists can actually track the spread of cancer through the body by following choline uptake. But it may be more than just the choline somehow feeding the cancer.

You might recently have heard about the Cleveland Clinic study that found that carnitine, a component of red meat, is transformed in our gut into a toxic metabolite called TMAO that appears to increase heart disease risk. (This was big news since most of us thought the problem with red meat was the saturated fat.) But in the April 25, 2013 issue of the New England Journal of Medicine, the same research team found that choline in eggs (which is also found in poultry, dairy, and fish) forms that same toxic TMAO too! Instead of feeding the research subjects a steak, they fed them hard-boiled eggs and saw a similar spike in TMAO levels in their bloodstream. So what carnitine does in red meat, choline does in eggs, poultry, dairy and fish; they both create TMAO.

The Harvard-led team speculated that not only may TMAO increase the risk of heart disease but it may also increase inflammation and help turn prostate cancer deadly. If that’s the case, this could help explain the link between animal product consumption and both of our leading killers, heart disease and cancer.

What could be worse than eggs for spreading prostate cancer, you might be asking right about now?  Apparently chicken is! That’s right:  poultry consumption raises the risk of progression among high-risk men by up to 4 times. That means a man who regularly consumes chicken ups his chances of getting aggressive prostate cancer (not the kind that nearly every 90 year old guy has, but the kind more likely to actually kill you) by 300%.

How so?  How does this all-American protein staple do so much damage in a man’s body?  The researchers suspect it may be due to the cooked meat carcinogens I talked about in my breast cancer blog, the heterocyclic amines that tend to build up more in chicken and turkey muscles than other meats. Heterocyclic amines are cancer-causing chemicals that form when muscle tissue is exposed to high cooking temperatures, like baking a chicken breast at 350o. It seems that perhaps these compounds found in cooked chicken act like fertilizer on cancer cells. And it doesn’t matter if the poultry (turkey included, by the way) is organic or free range.

Things are not looking good for eggs right now. Or poultry.

For more on this story, there’s an excellent video on Dr. Michael Greger’s NutritionFacts.org replete with all the attendant science called Carnitine, Choline, Cancer and Cholesterol: The TMAO Connection.