How to Forage for Turkey Tail Mushroom, a Medicinal Powerhouse 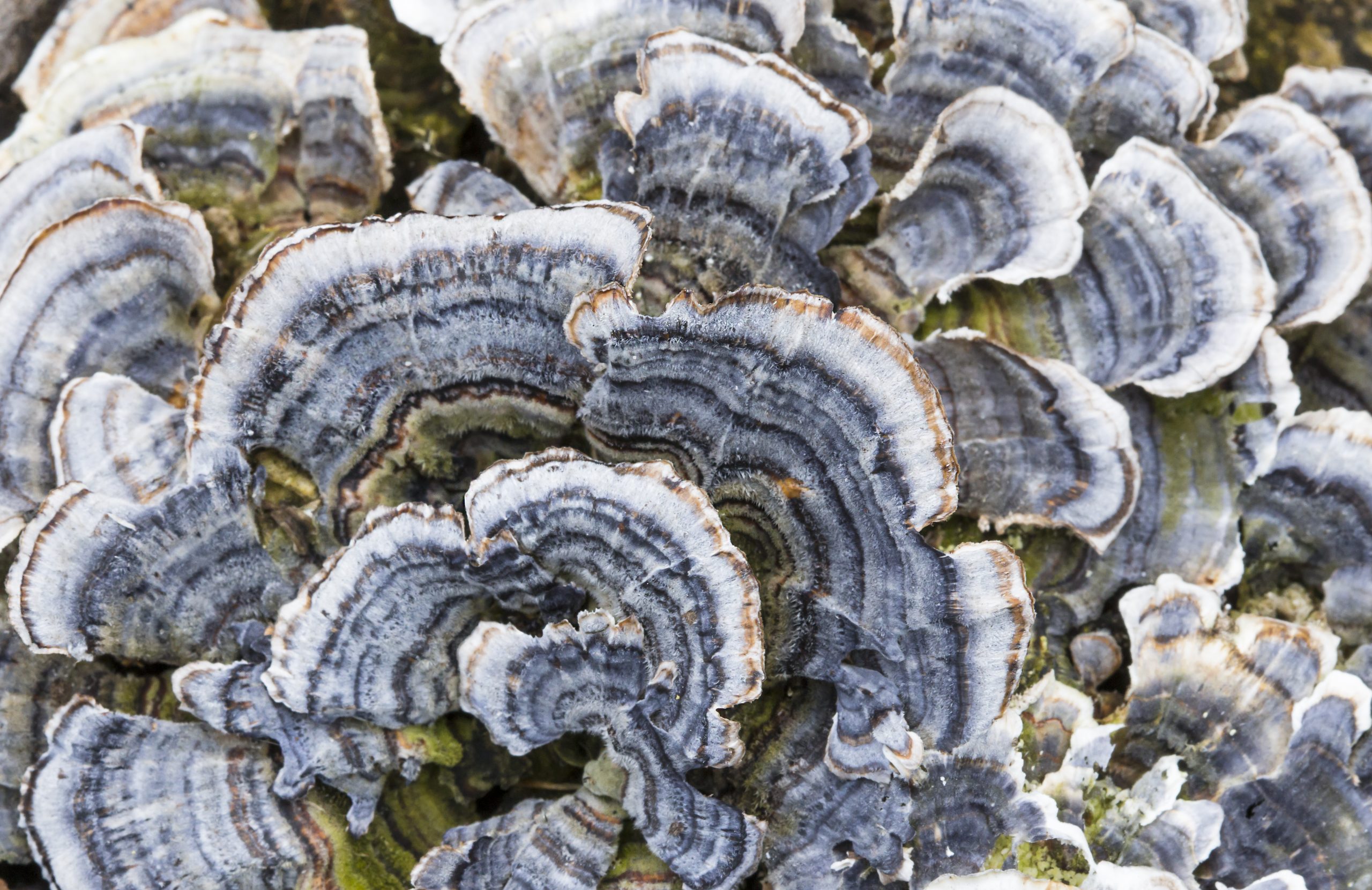 When it comes to mushrooms, most of us are looking for those choice edibles that wow us on the dinner plate. There are tons of wild mushrooms that are delicious and free for those who know how to safely forage them.

But, the foraging shouldn’t stop there: Lots of mushrooms are medicinal, many of which are at the forefront of combating serious ailments like Alzheimer’s, cancer, and heart disease. One of the most powerful medicinal mushrooms is called the turkey tail.

The turkey tail mushroom is formally identified as Trametes versicolor, Coriolus versicolor, and/or Polyporous versicolor, but it gets its common name from the fact that it resembles—you guessed it—the tail of a turkey. It fans out similar to a male turkey displaying his plumage in search of a mate, and the coloration of the mushroom is a collection of irregular bands of greys, browns, whites, and blacks.

Turkey tail mushrooms are exceptionally common, found in most forest around the world. Turkey tails are saprophytic (decomposing) mushrooms, so they help to break down old wood that has fallen in the forest. Consequently, they tend to grow on dead wood on the forest floor, either in shelf-like brackets or rosettes. But, let’s not get ahead of ourselves.

If all of these tell-tales are in place, then you are well on your way to identifying a turkey tail mushroom. Of course, novices should seek the guidance of more experienced foragers and practice extreme caution when harvesting and consuming any wild mushroom.

One of the crucial parts of foraging for wild mushrooms is knowing not just which mushrooms to identify but also recognizing those that might be mistaken for the desired fungi. With turkey tail foraging, there are a handful of other mushrooms to learn about:

The lucky part of turkey tail lookalikes is that they don’t tend to be dangerous. In fact, some of them are considered mildly medicinal themselves. That said, again, seek the guidance of more experienced foragers and practice extreme caution when harvesting and consuming any wild mushroom.

Turkey tail mushrooms have been used as medicine for centuries, and unlike most medicinal mushrooms, their efficacy is backed by a tremendous amount of successful research. Turkey tails help our bodies regulate the immune system, which aids in fighting cancer, reducing inflammation, and promoting speedy recovery, such as from chemotherapy.

In order to use it as medicine, it is prepared as a tea. The mushrooms are dehydrated so that they turn crispy. They are then blended to create a powder that looks more like a collection of paper spitballs. To prepare the tea, boil five parts water and add one-part turkey tail powder. Let this simmer for a long while, at least fifteen minutes and up to an hour. Strain out the solids.

Personally, I prefer to use my turkey tail “tea” as a turkey tail broth for a nice soup. The same medicinal qualities are there, but the flavor profile seems more suitable to my tastes. I love to add some fresh green onions, a little shaved garlic, and some cayenne, all of which add to the medicinal nature of the treat.

*Note: Turkey tail capsules and powder can be bought online or in health food stores. They are not cheap, however, but they are free and freely available along hiking trails.

For more Life, Animal, Earth, Vegan Food, Health, and Recipe content published daily, subscribe to the One Green Planet Newsletter! Also, don’t forget to download the Food Monster App on iTunes — with over 15,000 delicious recipes it is the largest meatless, vegan and allergy-friendly recipe resource to help reduce your environmental footprint, save animals and get healthy!