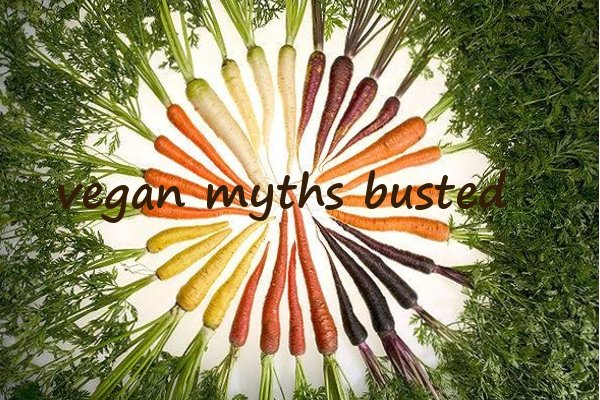 Although plant-based diets are seeing a surge in popularity, they’re still outside of the mainstream; it’s no wonder that there is so much misinformation about what happens when you drop meat, eggs, and dairy from your meals. Unfortunately, many of the myths about this way of eating could deter people from giving veganism a try, especially if they fear that plant-based diets fall short on nutrition or are unappealing and restrictive. Here are five issues that no one should worry about when they start eating vegan-style.

Myth #1: You’ll feel awful when you first go vegan because your body will be detoxing.

Fact: It doesn’t matter what you eat; your body is constantly producing harmful compounds and working hard to neutralize or excrete them. Complex systems involving the liver, kidneys and other organs are part of a very effective detoxification system that operates continuously in both vegans and meat-eaters. Although healthy eating may help these systems function at peak performance, there is no such thing as a “detox diet.” You won’t start shedding huge amounts of toxic material when you go vegan. As long as you are eating a well-balanced diet based on whole plant foods, you should feel just fine from day one of your vegan experience.

Fact: All plant foods that provide any protein at all—which includes all grains, legumes, soy products, nuts, seeds and vegetables—contain every one of the essential amino acids. Except for soyfoods, they are all a little low in one or two of them, but it doesn’t actually matter. Eating a variety of plant foods that includes a few servings of legumes every day—no special food combining at meals is necessary—supplies plenty of the amino acids that are essential for health.

Fact: Vegan diets are somewhat lower in fat than those of the average American, but not by a lot. Expert perspectives on fat have shifted over the past couple of decades and nutritionists recognize now that super-low-fat intake isn’t necessary for good health. The type of fat in your meals matters much more than the amount. And since the fat in vegan foods is the healthy unsaturated kind, vegans don’t need to worry about higher fat foods like nuts, seeds, soyfoods, avocados, and olives. Even vegetable oils fit into healthy vegan eating plans. Most vegans enjoy salad dressings, nut butters, veggies cooked in olive oil, tofu, hummus, and sometimes veggie meats and cheeses — all foods that provide the culinary benefits of fat without the health risks.

Fact: It’s true that vegans drop whole categories of food from their diet, so yes, they have fewer food choices. But the reality is that many people experience greater variety in their diet when they start exploring vegan options. Had they not gone vegan, they might never have tried roasted vegetable pizza, grilled tempeh with spicy peanut sauce, barbecued seitan, or fruit crumble topped with cashew cream. Vegans eat burgers and fries, grilled vegetables, spicy curries, Asian stir-fries, veggie sushi, macaroni and cheese, and pasta with sundried tomato pesto. They drink wine, beer and hot chocolate, and snack on tortilla chips and dips, popcorn, and potato chips. Vegan desserts include rich chocolate cakes, doughnuts, and ice cream made from coconut milk. There are great cookbooks for every vegan eating style, too, including entire books devoted to vegan cookies, vegan parties, vegan barbecues, and vegan burgers. Plug the words “vegan recipe” into an internet search engine and you’ll see that vegan diets are anything but boring.

Myth #5: A vegan diet requires vitamin B12 supplements, so it’s not a natural diet for humans.

Fact: Who knows what the “natural” diet of humans is — or if there even is such a thing? As humans evolved, so did eating habits based on availability, genetics, and climate. Simply moving around the globe changed diets and dietary needs. For example, our ancestors used to get all of their vitamin D from sun exposure. Now, populations that live far from the equator often need supplements or fortified foods to get enough. It doesn’t really matter that this isn’t the way we evolved to get vitamin D. Given the wide range in eating habits throughout the world, and the evolution of food choices, it’s not likely that there is some single natural way of eating. Vegans aren’t the only ones who need to supplement with vitamin B12, either. The Institute of Medicine—the group that establishes nutrient recommendations for Americans—says that all people over the age of 50 should supplement with B12 since many older people can’t absorb this vitamin well from animal foods. Rather than worry about what’s “natural,”— a question that’s impossible to answer — we should focus on choosing a diet that supports human health and nutritional needs while doing the least harm possible. A vegan diet supplemented with vitamin B12 makes the most sense in today’s world.