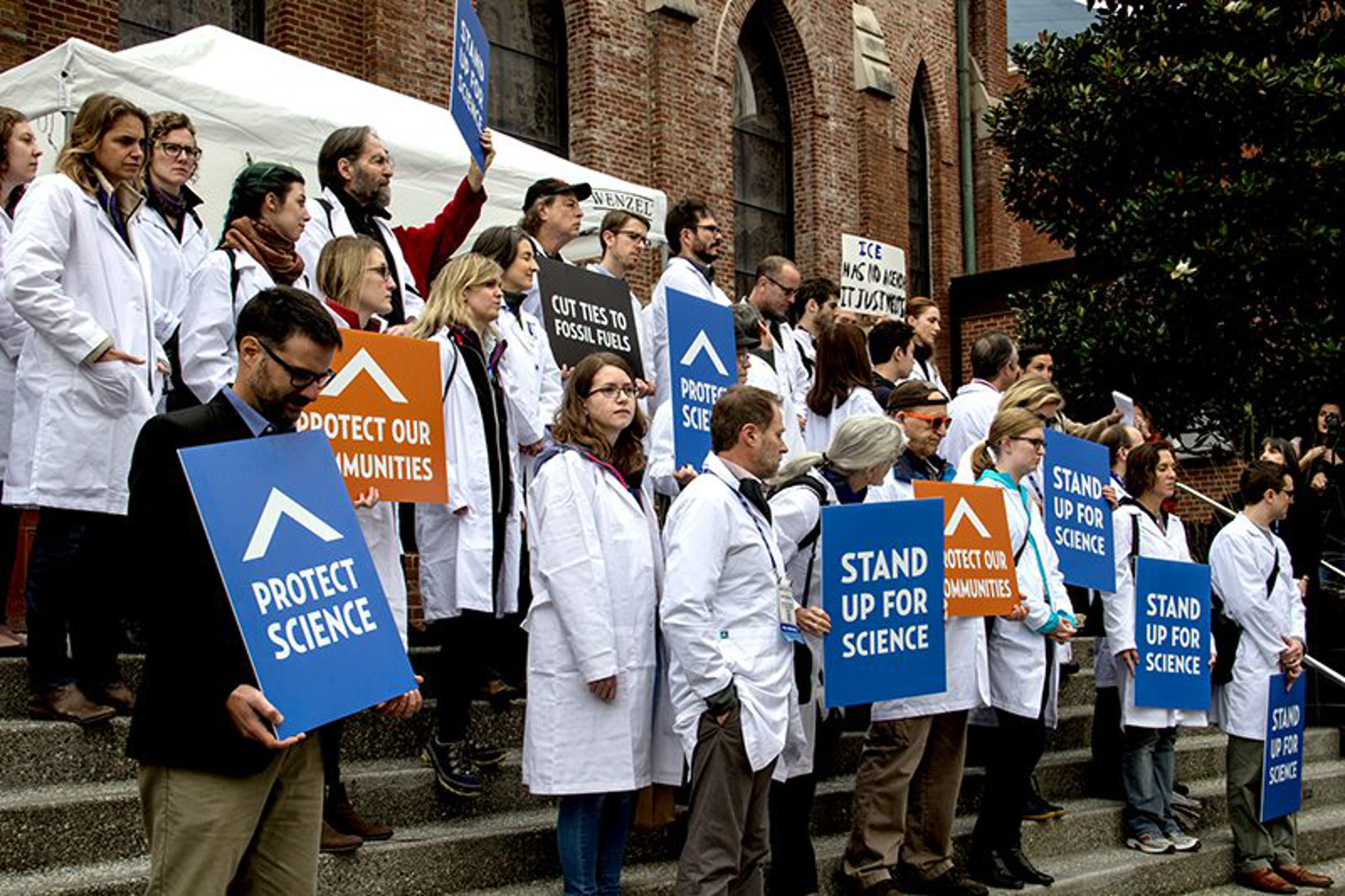 Employees of the Environmental Protection Agency (EPA) took to the streets of Chicago recently to protest the man who will soon be their boss. The selection of Oklahoma Attorney General Scott Pruitt to head the EPA has brought a blast of uncertainty to the agency officially tasked with protecting “human health and the environment” — but also a strong wave of resistance.

Donald Trump campaigned on a platform of outlandish ignorance — from calling climate change a “hoax” and promising to undo all of President Obama’s regulations, to vowing to “get rid of” the EPA entirely. Pruitt, who is known for his aggressive opposition to environmental regulation and his close ties to polluters, will soon be in a position to make Trump’s tweets a reality.

And the actual science underlying the EPA’s decision-making could also be at risk — which puts all of us who like clean air, water, and a livable climate at risk, too.

Why We Need Federal Scientists

High-quality science keeps us safe, healthy, and protects the environment. From ensuring food and drug safety at the Food and Drug Administration to tracking disease outbreaks at the Center for Disease Control, to watching hurricanes at National Oceanic and Atmospheric Administration, we all rely on the federal government’s experts and researchers.

Even so, past administrations have shown that the temptation to manipulate science to get a politically convenient answer is sometimes just too irresistible.

In fact, even climate change deniers will wrap themselves in the mantle of science as they obfuscate and deny what actual scientific findings show. Myron Ebell, the arch climate denier who was head of Trump’s EPA transition team, called out the EPA’s alleged “science manipulation” in a leaked “action plan” document while at the same time promising a thorough dismantling of EPA’s scientific expertise.

But political meddling — and outright denial — of government climate science didn’t begin with the Trump administration.

Just as the scientific consensus about climate change was solidifying and the urgency of climate action was increasing, the Bush administration was there to get in the way as much as it could.

The Bush White House demanded edits to EPA reports and analyses on everything from climate change to mercury regulations. Scientists were prevented from speaking freely with the media about their research, and the EPA’s climate change webpage was neglected for years. At one point, the administration literally refused to open an email about the impacts of climate change on human health. And meddling from Vice President Dick Cheney himself led Bush’s first EPA head, Christine Todd Whitman, to resign in protest over weakened air pollution rules.

Overall, a 2008 survey by the Union of Concerned Scientists found that 889 scientists at the EPA alone had personally experienced at least one incident of political interference in their work in the previous five years.

In general, the Obama administration tried to restore the integrity of federal science and put in place policies to protect scientists. In just his third month in office, for example, President Obama issued a memo outlining scientific integrity principles for the executive branch.

But the Obama administration was not immune to the type of abuses more common during the Bush presidency (look no further than the controversy around EPA’s fracking report for proof). The policies were in place to ensure scientific integrity, but the execution still needed work.

Obama may be gone, but for the moment, those policies are still in place at the EPA, the Department of the Interior, and other federal agencies. (At his confirmation hearing, Pruitt seemed unfamiliar with the EPA’s scientific integrity policies but pledged to review them.) These policies represent an essential tool for federal employees to resist Trump’s attacks on science, and a standard for integrity that we absolutely need to defend.

And Trump recently backed off a plan to fire all independent Inspectors General for federal agencies, leaving another crucial network in place to uphold scientific standards.

#ScienceNotSilence Will Help Us Resist Trump

One thing the Bush and Trump teams have in common is corporate polluters and lobbyists in high-level positions who attack science as a way of protecting corporate interests.

The difference is that Trump has put this approach on steroids by appointing people like Exxon CEO Rex Tillerson for Secretary of State and career shill Scott Pruitt to head the EPA — they’re not just acting on behalf of the fossil fuel industry, they are the industry.

And we’re already seeing their influence play out. Upon taking office, Trump imposed a gag order that prevented any communication between EPA employees and the public and froze all scientific grants. The grants have now been unfrozen, but the agency’s Twitter account remains silent (although an alleged “rogue” Twitter account is quite active).

An order to“scrub” EPA’s website of references to climate change was reportedly halted by staff outcry, though some information has started to be removed from the website. Scientists have been working diligently to archive scientific data and information in case it is removed from public view. Meanwhile, Trump’s Muslim ban has already impacted the many students, scientists, and professors caught in its net, harming U.S. science and international collaboration.

Much has already been written about how or whether the scientific community should participate in debates about policy or politics, but the reality is that politicians have for years interfered with scientists — not the other way around. The values of openness, curiosity, collaboration, and respect for evidence embodied by the scientific method are some of the most powerful tools we have in the resistance. It’s our duty to use them.