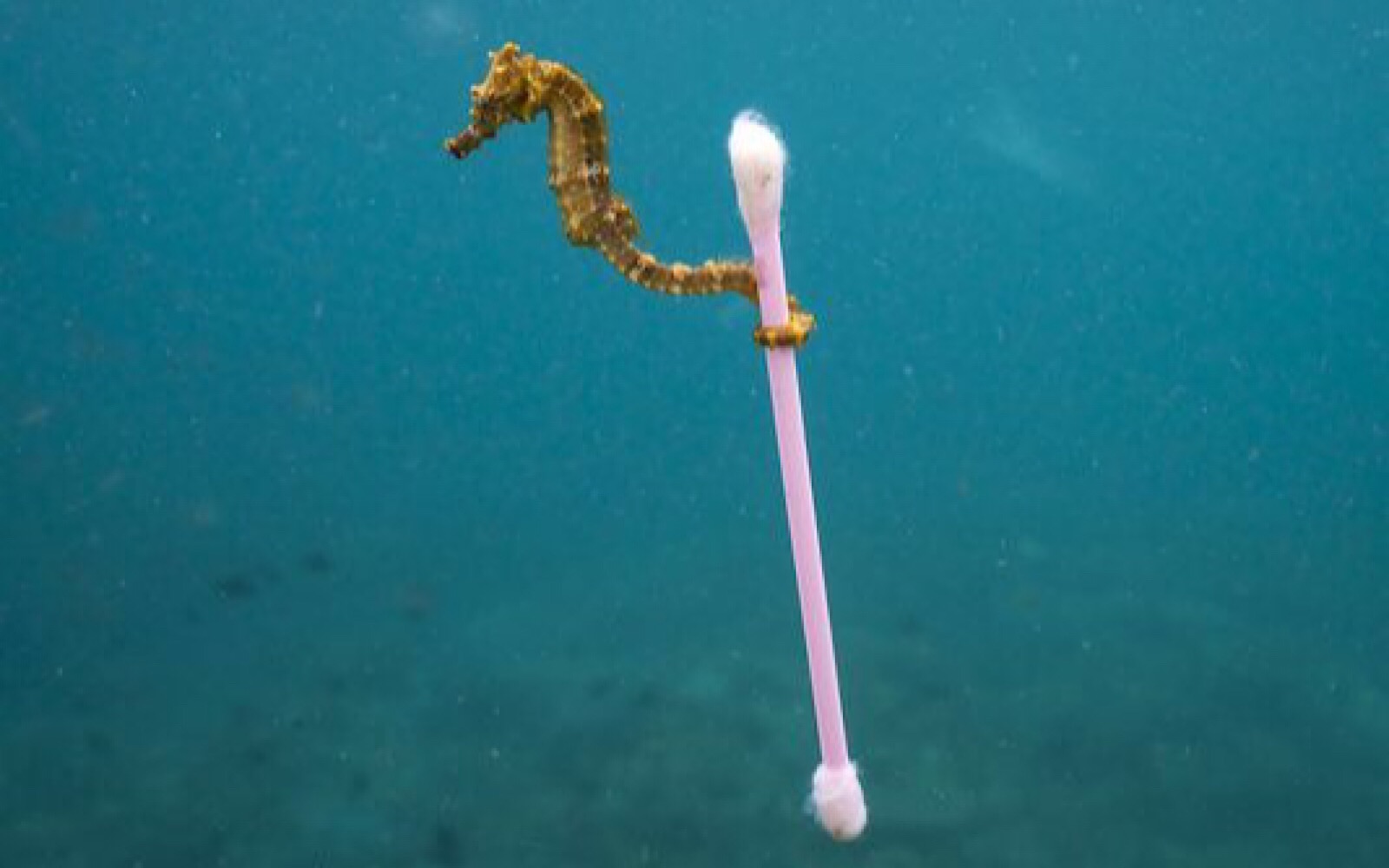 Nature and wildlife photographers like Justin Hofman capture stunning images showing us the beauty the world has to offer, but while photographing in Indonesia, what should have been a majestic image captured on camera became a haunting symbol of what we’ve done to our planet. Standing out from the deep blue ocean was a small seahorse floating through the water, gripping a pink plastic cotton swab with its tail. It’s an image that is both captivating and incredibly devastating. 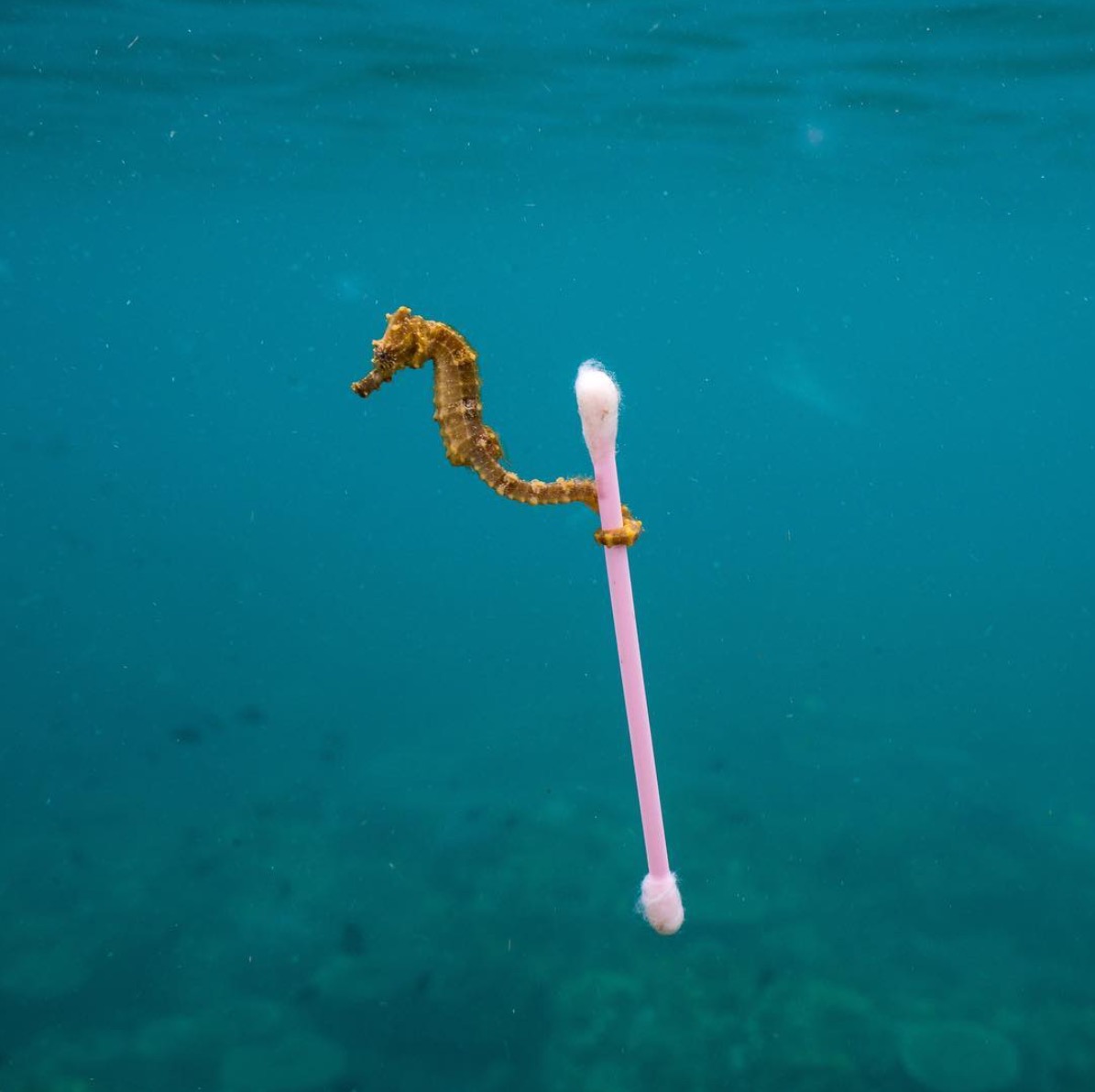 “I travel all over the world, and I can’t think of a single place where people haven’t impacted the planet,” said Hofman in an interview with USA TODAY.  He’s not alone. A photo of a sea turtle with a straw stuck in its nose recently surfaced, as did a photo of an opossum with its head stuck in a six-pack ring. There are documentaries filled with equally haunting images of the impact of our plastic trash, and photos of people working to clean up beaches and streams filled with plastic trash have become far too common.

The world’s trash has contaminated every corner of the planet, and with it comes pollution that is devastating entire ecosystems, killing marine life, and poisoning our food and water supplies. How did we get to this point, and is there anything we can do to fix the damage we’ve caused?

Plastic is everywhere, and its production is continuously driven by the demand for single-use convenience items like beverage bottles, bags, utensils, coffee pods, cups, straws…the list goes on. We toss away 6 million tons of single-use plastic every year and it’s become such a problem that cities across the world are starting to ban single-use plastics such as bags, straws, and eating utensils in an effort to reduce waste and prevent further harm to the environment.

It’s estimated that by the year 2050, the world’s oceans will contain more plastic than fish. But it’s not just bottles and cups floating through the water. It was recently estimated that as many as 51 trillion microplastics, which form as plastic photodegrades from sun and friction, are floating through the ocean. Microplastics can cause serious damage to marine life when they’re ingested. They have been found in the stomachs of zooplankton, and handfuls of plastic pieces have been removed from the stomachs of deceased seabirds and marine life. Sadly, over 700 marine species are now in danger of extinction as a result of plastic pollution.

Another concern with plastic is the chemical pollutants leached into the environment, both during production and as it sits in oceans and landfills. These pollutants poison fish and other marine life, and they can cause damage in humans who consume fish or contaminated water supplies. Findings from a recent study showed plastic fibers are present in 83 percent of the world’s tap water, meaning there is virtually no escape from plastic toxins.

With trillions of microplastics and billions of pieces of trash polluting the water and land, it seems like there is no way to undo the damage we’ve caused. And while that may be true to some extent, there are plenty of ways we can prevent destruction and harm to animals and our planet.

Do Your Part to End Plastic Pollution

As the photo of that little seahorse reminds us, our trash doesn’t go away once it’s hauled off to the landfill. Plastic is everywhere and might seem hard to avoid, but there are several things you can do to reduce the amount of plastic you bring into your home:

To learn more about the impact of plastic and what you can do to help, check out One Green Planet’s #CrushPlastic campaign.