DDT, the California Condor, and a Decades-Long Battle with a Banned Pesticide 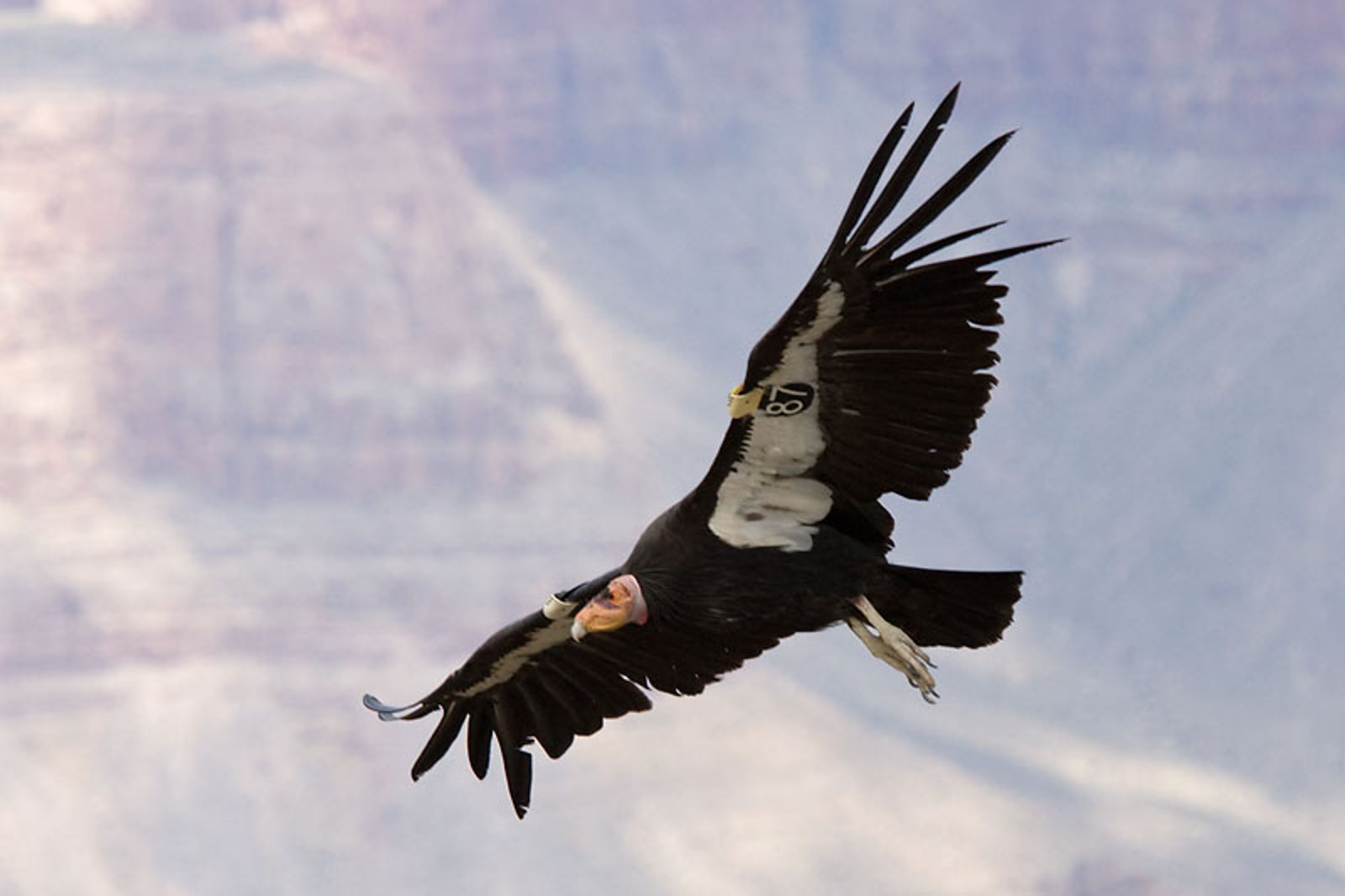 The California condor is a majestic icon of the natural world in the southwestern United States. With a wingspan of up to 9.5 feet and a characteristic bald and colorful head, Gmynogyps californianus, is a unique and recognizable character that reigns as North America’s largest flying bird. They can live to be 60 years old in the wild and spend their entire lives in monogamous relationships. Scavengers by nature, condors rely on their impeccable eyesight to spot deceased prey from up to 15,000 feet in the air. They usually prefer to dine on carcasses of sheep, deer, cattle and even marine mammals if they live near the coast. By consuming prey that is already deceased, condors hold an important role by keeping decaying flesh from stinking up the ecosystem.

Sadly, California condor numbers have declined drastically over the last few decades, and their original habitat has shrunk to a nearly unrecognizable size. We cannot be too certain of historical populations of the birds, but we do know that there were only 22 known individuals in the world by 1982, and only nine wild individuals by 1985. And while their natural habitat by the late 1800’s ranged from British Columbia to Baja California, their habitat was downsized to encompass just a small swath of land in southern California. Recovery efforts have placed the birds back into pockets of Baja California, Arizona, Utah as well as a greater range of California. 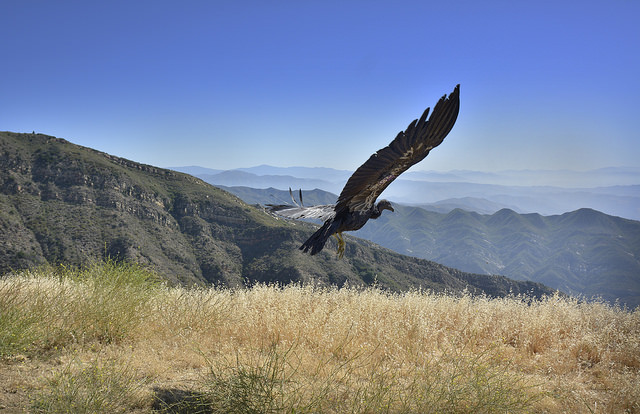 What exactly happened to these birds that used to dominate the skies of North America’s west coast? In short, man. While many species have gone extinct for millions of years without any influence from man, we cannot blame the near extinction of the California condor on nature. Unfortunately, humans have caused the majority of threats that have reduced the birds’ population.

First, habitat loss is a major threat to condors’ survival. As developments begin to dot the land, a condor’s habitat becomes fragmented. They may have to fly farther to find food and suitable places to perch, nest, and raise their young.

Second, interacting directly with humans or human activity has been taking its toll on condors. They are prone to collisions with powerlines that inevitably go up with development. They can also ingest dangerous chemicals like anti-freeze, or feed their chicks harmful garbage like metal and glass.

One final manner in which condors face threats to their health and population is due, oddly enough, to a chemical that the Environmental Protection Agency (EPA) banned decades ago. DDT was targeted by Rachel Carson in the release of her 1962 book Silent Spring which highlighted the environmental destruction of the once-popular pesticide. 10 years later, the EPA banned DDT-use in the United States. That was 43 years ago and yet this chemical continues to be persistent in the environment, causing thinness of condor eggshells and inevitable failure in adults’ attempts to breed.

DDT – Didn’t We Get Rid of That a Long Time Ago?

DDT stands for dichloro-diphenyl-trichloroethane. It was developed in the 1940s and become a powerful tool for the United States to control insects in agriculture and insect-born diseases like typhus and malaria for both the military and civilians. As DDT-use became more widespread, the dangers of the pesticide became more readily apparent. Insects were becoming resistant to DDT, and human and animal exposure to the chemical often resulted in reproductive issues as well as cancer. The perfect pesticide was no longer perfect and the EPA stepped up to ban the substance.

Sadly, the damage of DDT had already been set in place for decades to come. The chemical ended up in marine food chains when it was washed into the ocean. It was absorbed by the smallest micro-organisms like moss and plankton. As you move up the food chain into smaller fish, larger fish, and then top predators like birds, sharks, and marine mammals, the concentration of DDT in each organism grows. This phenomenon is called biomagnification and it explains why those on the top of the food chain are most prone to problems from DDT. By continually storing more and more of the pesticide in their fat, larger animals have much higher concentrations of DDT in their bodies than those at the bottom of the food chain.

Unfortunately for condors, the fact that they are scavengers that prefer larger prey means they ingest an awful lot of DDT. Condors that feast on dead seals, sea lions, and whales are exposed to the greatest concentration of DDT and DDE (a breakdown of DDE) as their prey is at the top of the marine food chain. And this is having a major impact on condor reproduction just as it has had on many other iconic birds of the United States.

Eggshell thinning is a phenomenon noted by scientists when studying birds exposed to DDT. As the birds’ natural ability to metabolize calcium is negatively impacted, the eggs they lay have very thin, weak shells. They cannot support the weight of adult birds sitting on the nest and simply crack before the baby bird inside has had a chance to mature into viable offspring. Problems with eggshell thinning as the result of DDT are well known in bald eagles and brown pelicans, as well as condors. 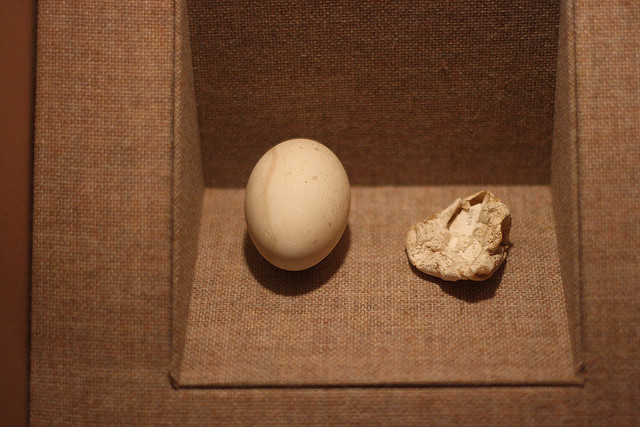 How I See the World/Flickr

Thin-shelled eggs as the result of DDT consumption are especially dangerous to California condor numbers given some characteristics on how the bird reproduces. Monogamous pairs of condors invest a lot of time and resources into their offspring. Females typically lay just one egg every other year and the parents take turns incubating it. The egg hatches after 54- 58 days and the chick remains dependent on the parents for food their first year of life. Being as condors do not lay multiple eggs year after year, it is imperative that the one they lay every few years produces a viable hatchling. However, with DDT in the picture, condor reproduction continues to face major challenges.

What’s Being Done to Save Condors?

Science has helped guide conservation programs to eliminate some of the major threats to condor populations. In 2008, the state of California banned hunters from using lead bullets when hunting in areas that condors inhabit to reduce the condor’s risk of lead poisoning. Utah and Arizona also launched their own programs to encourage hunters to voluntarily use non-lead ammunition. Ensuring that carcasses from hunting do not contain lead has helped condors avoid the perils of lead poisoning and the number of cases of leas poisoning wildlife veterinarians have to treat in wild condors.

Despite the dire situation that California condors have been reduced to over the last few decades, it is reassuring to note that many conservation groups are seeing success in their efforts to bring these birds back from the brink of extinction. By 1987, all 27 condors were in captivity at the Los Angeles Zoo and San Diego Wild Animal Park, and reproduction and release programs were underway. The first chick in captivity hatched in 1988 and in 1992 the first two of the previously wild birds were released in southern California.

As reproduction in captivity has been successful and more birds become available for release into the wild, release sites expanded in range to also include parts of Arizona and Baja California. As of December 31, 2014, the total California condor population stands at 421 individuals. 228 of these birds are wild with 128 living in California, 73 inhabiting Utah and Arizona, and 27 living in Baja California. That’s 228 condors in the wild in 2014, up from 0 in 1987! 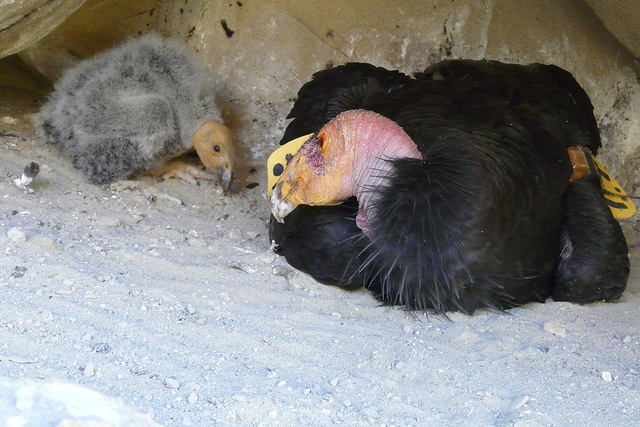 Captive breeding programs are showing to be successful in helping condors avoid some of the pitfalls of a diet heavily contaminated with DDT. And while it is important to praise these scientific successes, it is also crucial to remember why we are required to take such aggressive action in conservation in the first place.

Think About the Future

The story of the California condor is one that should make us stop and think about our treatment of the environment as a whole. The environmental awareness that arose in the 1960s and 7’s helped equip our country with many laws and organizations fighting environmental destruction. The banning of DDT in 1972 was one of the many environmental victories the era experienced.

We’ve taken drastic and aggressive action against a harmful chemical, and yet our decision to use the chemical decades ago continues to haunt us today. Sadly, we have many modern-day “DDT’s” on our plate that threaten to harm the planet and people for generations to come. When an oil spill happens, the danger and damage do not disappear once we stop seeing black wash up on our beaches. The BP oil spill in the Gulf of Mexico was halted years ago, and yet there are long term consequences we still face today. When it comes to climate change, scientists are worried we may soon pass a “point of no return” after which no amount of action to reduce greenhouse gases will make a difference.

When it comes to acting on behalf of the environment, urgency should matter. We can’t plan to turn the tide in a day with sweeping legislation or a complete overhaul of society. There are delays in nature and we will continue to see damage appear even after we right the ship. Just as with DDT, the environment will need time to cleanse and heal itself after the destruction man enacts on it. And that is why action now and today is so vital. We need to enact the earth’s healing process as soon as possible so that, someday, the environment will be in a better place.