5 Countries Might Be Responsible for the Majority of Ocean Pollution, But We’re Not Off the Hook! 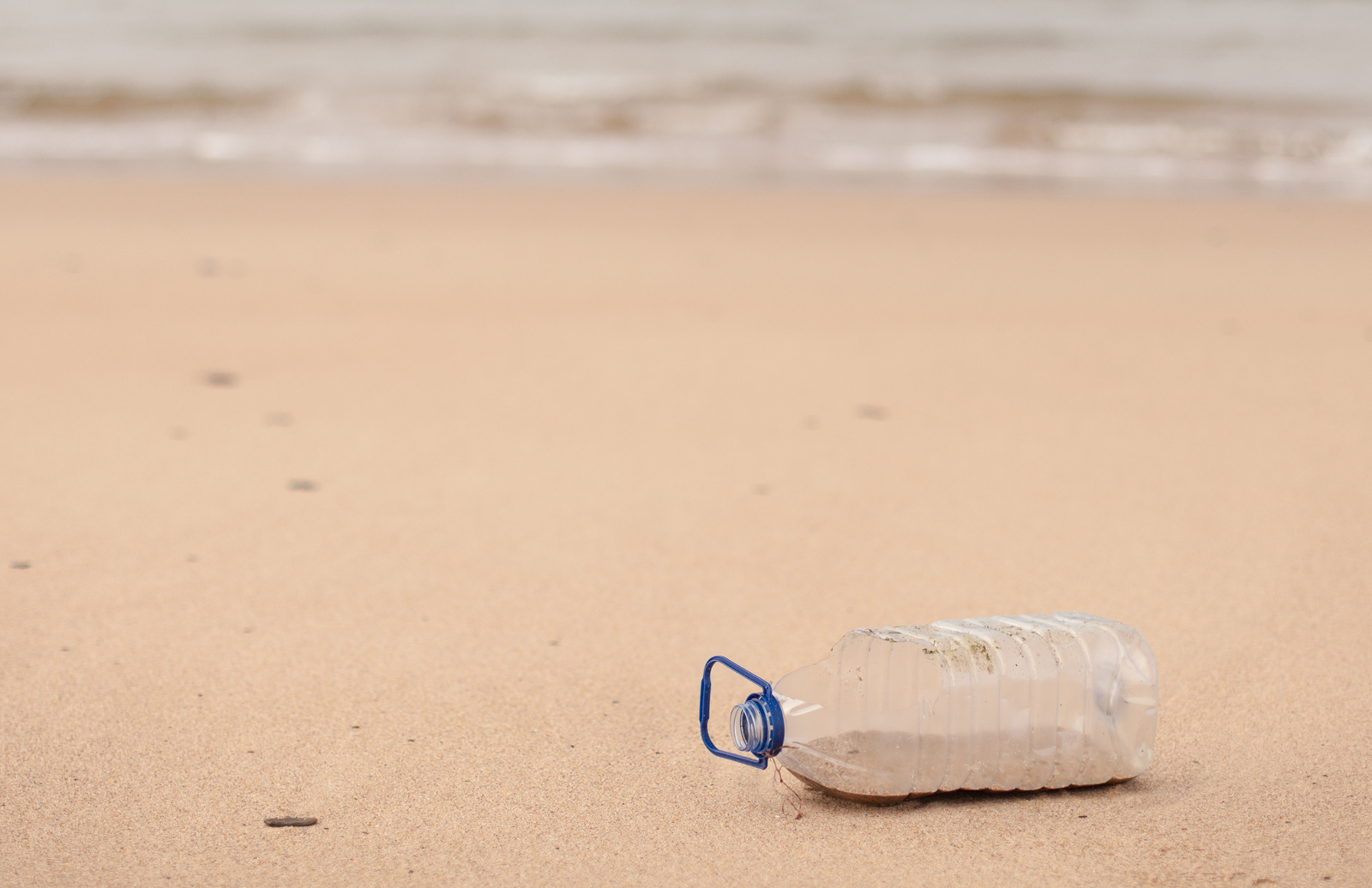 Ocean plastic has certainly been receiving a lot of negative press lately. As the impacts of our throwaway lifestyle continue to become more and more visible, environmentalists and scientists all over the planet are sounding the alarm. Studies have shown that we, collectively, are dumping an 8.8 million tons of plastic waste into the ocean every single year and, as a result, over 700 marine species are in danger of extinction. To make matters worse, plastic pollution is also coming back to haunt people in the form of plastic particles in seafood and even hiding in table salt. Clearly, it is time to take notice of the damage our plastics do once they reach the oceans, and finally get serious about addressing the problem.

What presents a particularly difficult challenge for worldwide actions against ocean plastics, however, is the fact that every coastal country shares a piece of the blame. A study published earlier this year used plastic pollution estimates from 2010 to create a picture of marine plastic pollution around the world. It ranked countries in regards to their contributions to plastic pollution in our oceans and helped confirm to us the fact that this indeed is a global issue.

First, let’s acknowledge one of the key findings of the recent study where it was discovered that a whopping 60 percent of plastic pollution stems from only five countries in Asia. China ended up leading the world in marine plastic pollution, contributing an alarming 1.32 to 3.53 million tons of plastic every single year to our world’s oceans. This accounts for 30 percent of all of the plastic debris that reaches marine ecosystems worldwide. Indonesia ranked second with an estimated 0.48 and 1.29 million tons of plastic marine waste every single year, followed by the Philippines in third place.  Vietnam and Sri Lanka rounded out the list of the top five countries that allow plastic waste to make its way into marine environments. 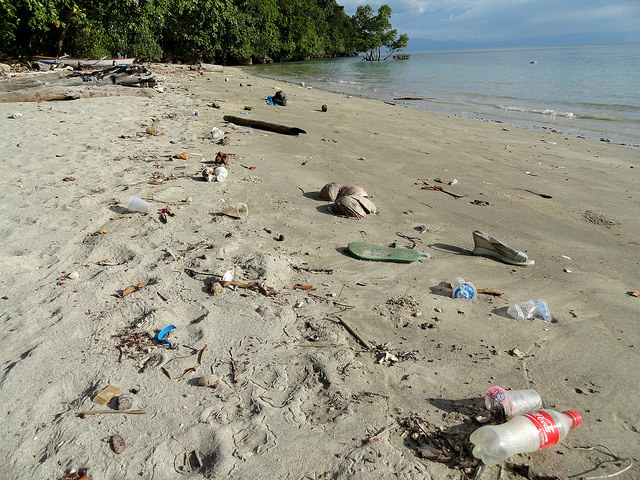 And What About the United States?

As you may have noticed, the United States didn’t make the list of the top five plastic polluters. Actually, the U.S. ranks 20th in the world for countries tossing plastics into our oceans. While it may be nice to know we aren’t currently the biggest threat to ocean life and marine ecosystems, that doesn’t mean we don’t still have a long way to go when it comes to how we treat our planet.

The United States accounts for less than one percent of the plastic trash that ends up in the oceans every year, yet we’re still not doing so hot when it comes to our contribution to plastic waste in general. The average American actually generates more waste per person than the average person in China (5.6 pounds compared to 2.4 pounds), who, as you’ll remember, is the country with the largest contribution of marine plastic waste.

What exactly are Americans using and tossing every day to give us nearly twice the waste of the average Chinese citizen? In 2012, America produced 28.9 million tons of plastic waste. Not to mention, the U.S. exported 491,000 tonnes of plastic to China in the form of scraps and recyclable material in the first half of 2015. With this in mind, it hardly seems fair to pinpoint China as one of the world’s largest producers of plastic waster without acknowledging the role that the U.S. plays in the sheer volume of plastics coming into the country.  Although not all of this ended up in the oceans, this staggering stat should still be concerning. Especially when you add in the consideration that about 80 percent of trash produced on land ends up in the oceans, eventually.  We really need to get a handle on waste in our own country if we hope to make a difference elsewhere.

Knowing that marine plastics are such a widespread problem with countless countries contributing to the issue, it may feel downright overwhelming trying to figure out how to start addressing this mess. Where can we possibly begin to make a dent in all this waste?

Your best bet to make a difference in the plastic pollution problem is to start addressing the issue right where you stand. You have the most control over your own life and actions, so why not start right there? 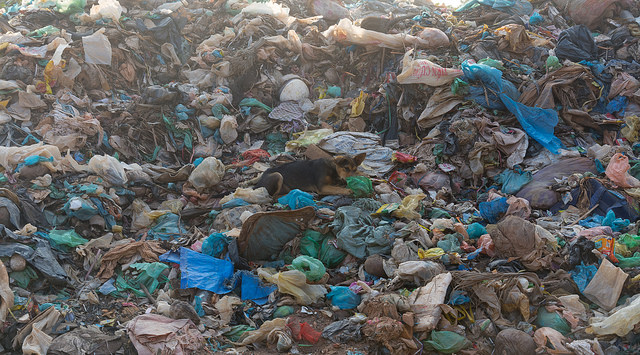 As you explore the issue of marine plastic pollution in greater depth, you’ll find there are people all over the world that are trying to address the problem, and they’re starting at the local level as well.

In Indonesia, there are grassroots efforts that have volunteers both cleaning up the plastic waste currently riddling the local environment, as well as conducting outreach to educate citizens on the damage of mismanaged plastic waste. And in Vietnam in 2013, the deputy Prime Minister at the time made a goal for the country to reduce plastic bag use by 60 percent by 2020 in an effort to reduce the waste associated with plastic bags.

This goes to show you that, just because the issue of marine plastic pollution is a very big problem, it doesn’t mean you should let it win. Even in countries that take the biggest piece of the pie when it comes to contributing to this problem, there are activists with hope in a better future, and they haven’t given up.

It should now be clear that our oceans are facing a problem of epic proportions in plastic waste. Sadly, the Ocean Conservancy predicts that plastic production will grow from 250 million tons to 380 million tons by 2020. That puts, even more, pressure on activists to halt the flow of this waste into our marine ecosystems. It’s time to act!

First start by finding replacements for some of the common plastic items you use every day. You can also look to kick single-use plastics from your daily routine. And what about chucking the plastic you use as a pet parent? Or a people parent? There’s also a lot to learn from others that have dedicated themselves to waste-free lifestyles.

Use this quick guide with 10 life hacks to cut plastic out of the picture to help as well as the Ultimate Guide to DIY Cleaning, Hygiene, and Beauty to go the extra mile!

The world may be predicted to head in a direction where plastic pollution is an even bigger problem in the future, but you can help write a different narrative by changing your lifestyle today. The oceans will certainly love you for it!