The Plight of the Hermit Crabs 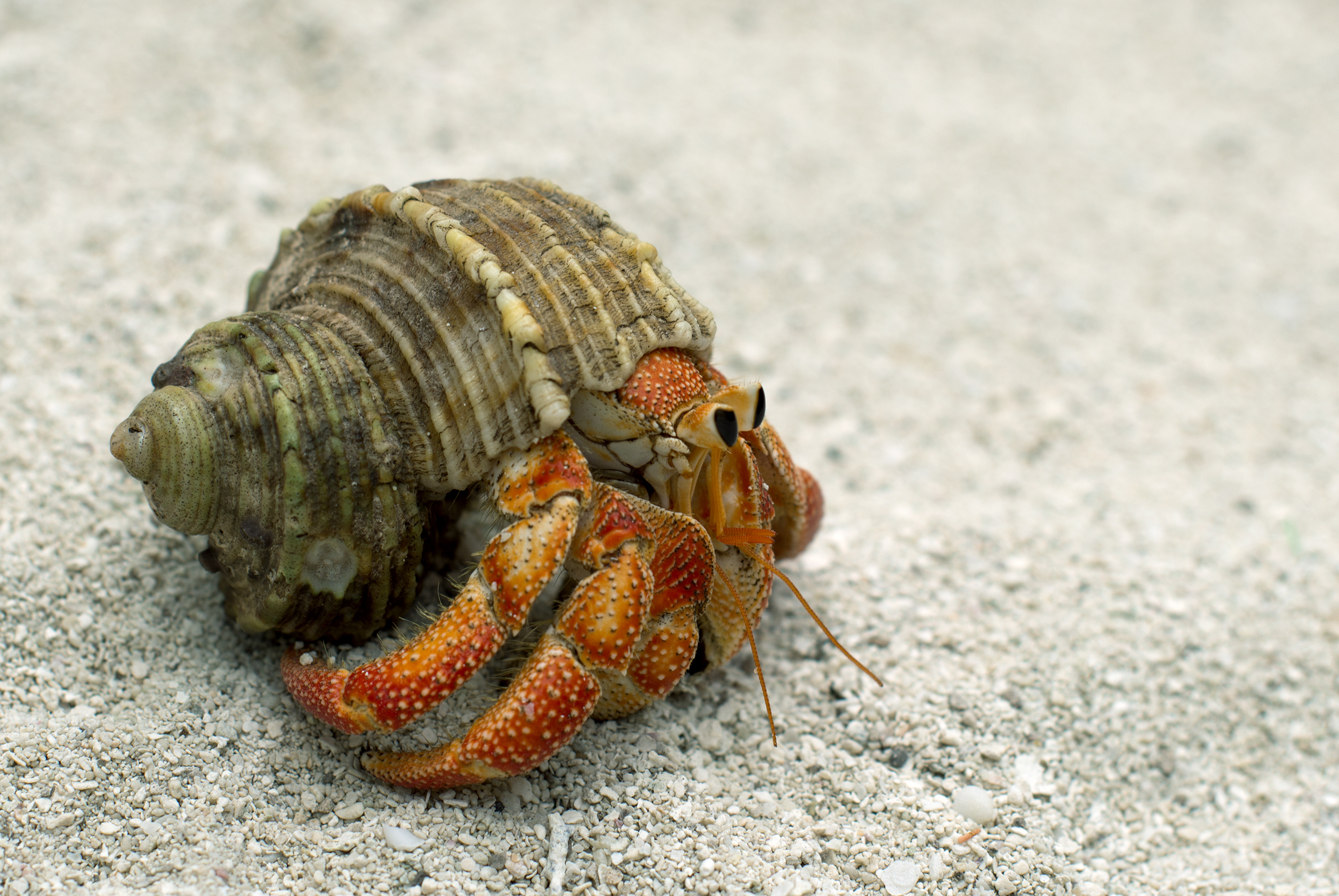 Every year around this time, shops lining the beach city boardwalks fill their familiar wire cages with curious critters. Tourist children ogle as golf ball-sized crustaceans cling to the wires, and to one another, with hairy purplish legs and almost menacing, if not so comically small, claws.

The shells sheathing their squishy abdomens feature images of Spongebob Squarepants and the New York Giants’ logo, and that’s it; the kids are hooked. After parents cave into those wonder-filled eyes, the youngsters dance-off, swinging a cage no bigger than a designer handbag to and fro into the sunset.

The Real Cost of a Hermit Crab Souvenir

The hermit crab inside this enclosure could have lived up to 30 years, but now, he will likely survive less than one. He will sit on a kitchen counter, receiving morsels of chemical-laden commercial food and a dribble of water as often as his human caretakers remember.

Soon, he will struggle to breathe because his modified gills require tropics-level humidity, an amenity that is severely lacking in most of American suburbia as summer sizzles out into autumn. He may have an itch to grow, to shed his exoskeleton the way we disregard ill-fitting clothing to Goodwill, but alas, it won’t budge. Without the ability to burrow into moist, protective substrate, his natural growth processes will simply stop. Constricted by his exoskeleton and facing imminent suffocation, he will soon perish the way hundreds of thousands of his kind have before him.

Hermits are Wild Animals Too

Hermit crabs are wild animals who thrive on tropical coastlines in colonies, often sleeping stacked on top of one another and even collaborating to trade homes or reach a food source. According to recent research, when faced with a difficult choice — to withstand a painful shock or to abandon their crucial protective shell in order to escape the pain — these sensitive crustaceans appear to weigh their options, taking into account the value of the shell in their ultimate decision.

Despite these advanced attributes, hermit crabs for decades have been reduced to tiny trinkets, plucked from their habitat by the thousands, violently shoved into poisonous painted shells, and put on display for the masses to cart home, dooming them to an abbreviated existence.

As land hermit crabs cannot viably reproduce in captivity’s sub-optimal conditions, this industry relies on the wild crab population season after season to fill its cages. Captive crabs, of course, require an assortment of various shells to inhabit, the way that girl all of us knew in high school filled her closet with shoes from glittery flip flops to stilettos, except, in this case, it’s vital for survival.

The collection of these shells for captive crabs contributes to what’s been dubbed the “hermit crab housing crisis”: at any given time, 30 percent of wild hermit crabs inhabit shells that are just too small because of lack of availability (read: the previous owners must have vacated — died — for the shell to go on the market).

It’s almost as simple as teaching math to an elementary school student: if there are 10 shells to go around and 8 hermit crabs to fill them, all is more or less right with the world. But once we pluck 5 shells from the mix for our caged hermit crab at home (or our own personal shell collection), 3 wild crabs must think outside the box. I hear old bottle fragments are all the rage these days for those unfortunate individuals. Finally, a win for ocean trash? If only these makeshift “shells” provided adequate shelter.

There’s a simple solution: we must stop buying these peculiar, intelligent sea creatures and urge stores to shut their doors on the hermit crab trade for good.

If you have hermit crabs, it’s your responsibility to learn about their needs, like high humidity and temperature, deep substrate for molting, unpainted shells, and de-chlorinated fresh and saltwater. A captive crab should never be released to fend for himself in the wild, as the chances of finding the perfect mix of conditions in a prime location are next to nil.

But we can strive to give these unlucky critters the best fighting chance, and you can learn how to at www.PlightoftheHermies.org.